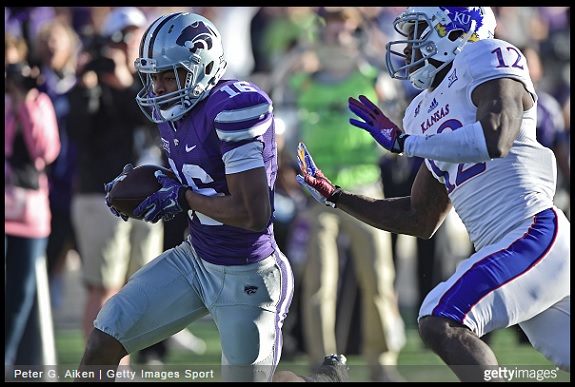 One of my favorite prospects I’ve looked at this year. Kansas State wide receiver Tyler Lockett.

– Elite route runner who commonly ran advanced concepts and performs them at a high level, a natural separator
– Quick feet who gets into breaks quickly and explodes out of them, no stiffness in his hips, very fluid player
– Despite size, shows ability to win against press or bump and run, quickness off the line and a nice jab step to separate
– More physical player than you’d anticipate, shows ability to win at catch point on contested passes
– Strong leaper who does a great job of high-pointing the football, plays “big”
– Excellent body control who adjusts well to poorly thrown passes and has natural feel for keeping feet in bounds
– At his best, plucks the ball away from his body and shows an extended catch radius
– Quick to the tuck after the catch, even on poorly thrown passes he has to reach for
– Timed well at the Combine (4.40 40) and shows up on tape, vertical threat
– Can make defenders miss in the open field
– High football IQ who is used to adjusting routes based on coverages
– Experience playing all over the field though mostly spent time on the outside
– Loads of special teams value on the return and coverage units
– Prolific career who rewrote the school’s record books
– Durable who only missed one game due to injury
– Strong bloodlines, father and uncle made it to the NFL as receivers

– Tiny frame and doesn’t possess much muscle, short arms and baby hands (30 and 8 3/4 inches respectively)
– Inconsistent hands, drops far too many passes that hit him square in the hands
– Moments where he can get outmuscled by bigger DBs, re-routed or jammed
– Lacks the strength to run through tacklers, may not be the YAC threat you’d think
– Makes an attempt but an ineffective run blocker, isn’t anything more than a pest
– May profile as a slot receiver but has relatively limited body of work running NFL routes from there, tended to run “spread routes” (swings, screens) in the slot
Other

I’ve teased Lockett before, noting how even when I didn’t put on Wildcats’ tape to watch him, he was impossible to ignore. But getting to sit down and focus solely on him made me realize how good of a player he is.

The 4.4 flat he turned into the combine is tantalizing but it isn’t the first thing I’d praise him for. It’s his route-running and ability to get open that amazes me. At his size, you’d expect him to be quick but it’s the nuances and subtlety of route running that makes him elite. Knows how to get defenders to bite and then break away once they do.

In the red zone, Lockett is running a mini-PCP (post, corner, post) route. Breaks inside, plats and explodes back out, and then cuts back in. The cornerback is frozen, forced to sit in his pedal and watch it all unfold. Lockett hauls in the pass for six. It looks easy but in reality, is far from it. The good players just make it look that way.

We’re going to see the same thing in the red zone below but add on the surprising physicality he shows. Jab step to burn the corner but with the ball floating, the DB has a chance to recover. Lockett goes up to high point the football and wrestles it away from the corner attempting to play the pocket. Another six.

His 35.5 inch vertical at the Combine was good but not great. However, on tape, he’s an impressive leaper with an affinity to go up and compete for the football. Must-have trait for any successful wide receiver.

Leaps, makes the grab, and absorbs the shot from the Oklahoma safety.

Though he needs to be a consistent catcher, he flashes excellent hands. Look at him adjust and extend to this pass against Baylor. True fingertip catch that he hauled in while falling to the ground. 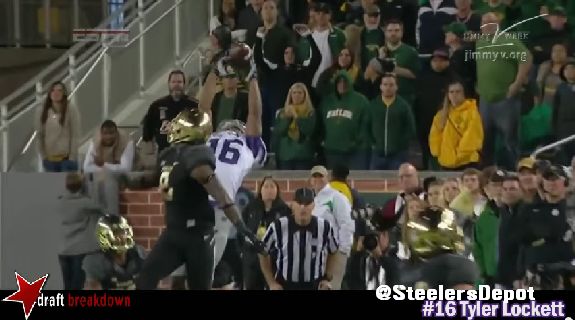 Uncontested but look at him drag his feet to stay in bounds along the sideline against Iowa State. Impressive. 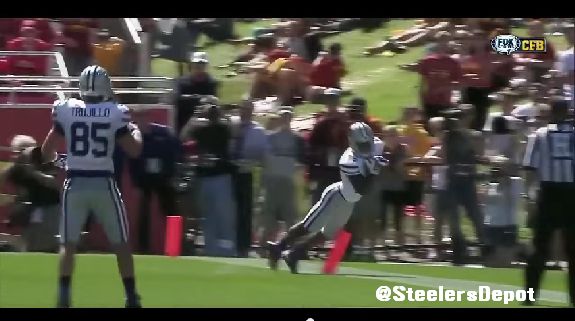 Feel free to consult your nearest Tyler Lockett highlight reel for other examples but here’s a taste of what he’s capable of doing as a returned. Patience to follow his blocks and the ability to make defenders miss on this kick return, even if it isn’t taken to the house.

This is even a prospect who has gotten work as a gunner before. I don’t consider him the ideal candidate to assume that role but it never hurts to have a receiver who can help out in multiple ways on special teams.

All signs point to the Lockett’s of being a high-character family. Just ask Kansas State head coach Bill Snyder. He should know – in addition to recruiting Tyler, he was the coach who recruited his father, Kevin.

His biggest concern are the drops. Far too many easy catches slip through his hands. Had four drops in the four games I studied closely. And in casually observing in other games, like the bowl game against UCLA we’ll highlight below, there were others.

Tremendous job to get the DB to break the wrong way. Should be an easy six. But the pass goes through his hands.

It’s hard to say with definitively and it doesn’t make it any more acceptable but some of these drops came early in games. Perhaps a product of Lockett needing to get “warmed up.” Just a thought.

Listen, I get it. Wide receiver is not a need for the Steelers. But Lockett is a talent I wouldn’t pass up. Always of the mindset that great talent finds a way to get itself onto the field. Lockett is an immediate solution at return man – Dri Archer could go the way of Kraig Urbik and even in year two, is no longer on scholarship –  and can function as a #4 WR. He’s going to help the team win.

You can call him Archer but he isn’t. He has a defined position, excels at it, and is a more physical prospect than the team’s 2014 third rounder.

I’d have no qualms about picking Lockett. In fact, I’d encourage it. I said I would eventually mock to him to the Steelers and people would yell at me.

Let the yelling commence. But there’s no arguing with the tape.

Games Watched: at Iowa St, vs Texas Tech, at Oklahoma, at Baylor