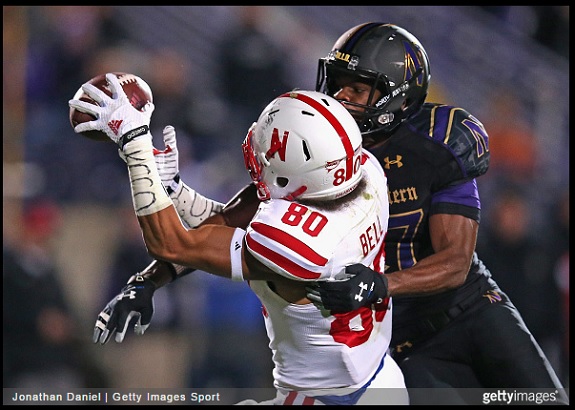 Wide receiver is not a glaring need by any means as the Steelers have their top three in Antonio Brown, Markus Wheaton and Martavis Bryant. The number four spot is open and if Darrius-Heyward Bey doesn’t return, the spot is wide open. Today, we will evaluate Kenny Bell.

-Has the length for receiver, red zone threat
-Good after the catch
-Shows good burst and acceleration, gets into a second gear and stretches the field
-Can get on top of corners quickly
-Fast player, causes havoc in space – ran a 4.40 at combine, 4.37 at pro day
-Crisp route runner, uses speed to advantage
-Excellent run blocker, has some nastiness
-Has return experience with kickoffs
-Fights for the football
-Very good at separating himself from defenders
-High football IQ
-Tons of experience

-Lacks strength (7 reps of 225 at combine)
-Can be over-aggressive and sometimes lunge when blocking
-Looks lost sometimes – doesn’t know who to block
-Fickle hands/drop issues
-Needs to differentiate how he gets off the line of scrimmage
-Raw when it comes to certain routes, needs to sell better
-Sometimes has trouble locating ball over his shoulder down field

Bell isn’t flashy by any means. He is not elite in any single aspect of his game, but also, not one aspect is severely in need of improvement. He is a well-rounded prospect with great upside. He reminds me of Hines Ward, excellent run blocker and does everything else well, but not at an elite level.

Bell shows off his speed and acceleration off the line of scrimmage. He flies vertically downfield and stops on a dime to throw off his defender. He makes a good body catch in between two defenders for the first down. Great display of route running, speed and recognition of where the first down was.

Bell is lined up at the bottom of the GIF: puts his self in great position to block the safety (#3) and just passes him up to block downfield. He has trouble finding players to block or finding the correct ones. A little coaching up will help correct this. Nothing huge but the safety ended up making the play.

Waiting for the reasoning behind the reminder of Hines Ward? Look no further. Bell has some nastiness and high effort to his run blocking. Looks like he takes pride in this facet of the game. In both GIFs, Bell engages with the defender and uses his legs and aggression to force his opponent to the ground. Hines Ward –esque if you ask me. Would love to see him on special teams, and the number four receiver has to contribute on special teams.

Here, Bell doesn’t engage fully and he allows the defender to keep his distance and focus on the ball carrier. He doesn’t churn his legs and use his strength to move the cornerback. This is where the lack of strength becomes apparent.

This GIF will make Todd Haley jump for joy. Yes, it is a screen play. Bell is lined up in the slot and after the catch he shows why he returned kicks his entire career. He is great in space, and with being teamed up with AB, he will only get better. Haley loves throwing screens and if Bell isn’t catching the ball, he is a quality blocker. Defenses won’t know who will be getting the ball since Bell can both block and get the YAC.

A reoccurring issue with Bell is his hands. They tend to be unreliable. A little hint of DHB in him, but he just needs taught to look the ball in and not run up field without it. A correctable flaw, but it is apparent. In the GIFs, you will see the easy catch being mismanaged. A perfect pass in the first GIF and it is dropped. He tried to go up field far too early. Needs to look the ball into his hands, and then make the play. The second GIF, he is running a drag route and ball is a smidge behind him but very very catchable. Brought his hands down too early and the ball was not caught.

This is probably my favorite play from the tape I watched on Bell. A stutter step off the line of scrimmage to throw the cornerback off, and then he turns on the jets and accelerates up field. The ball was a tad bit under thrown but Bell goes up and high points the football. He grips the ball tightly and comes down with it. These are the plays that make a player successful in the NFL. 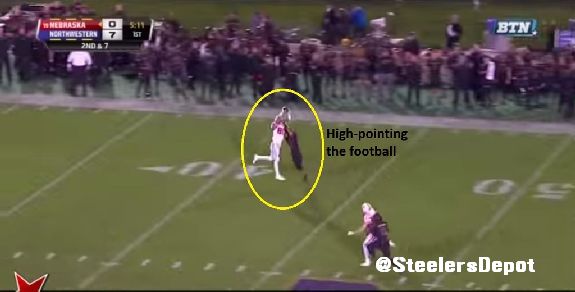 Waiting to see that 4.37 speed in action? Wait no longer. He absolutely burns this safety (corner blitzed) and the free safety bit on the play action. He was one on one with a safety that was in bad position and took full advantage. The ball was slinged down field and Bell caught up with it for a great catch and score. Reminds me of Martavis Bryant here.

If I am Mike Tomlin or Kevin Colbert and the sixth round comes along and our needs are met, Bell should be highly considered. He is a mixture between Hines Ward and Martavis Bryant. Not Elite in any facet of the game but good in all of them. Well-rounded receiver. His route running could use some work, but every sixth rounder will be a little raw (even Antonio Brown was). He would fill the number four spot on the depth chart with ease. He could contribute on special teams in many ways. Attacking kickoffs/punts or returning kickoffs; Bell could contribute. Tomlin said he wants returning help, here it is. At least some competition and insurance for Wheaton and Dri Archer.  A run blocking receiver will be in desire since Justin Brown is gone and Lance Moore was mediocre in that field. Bell has great upside and would be a steal in the sixth round.