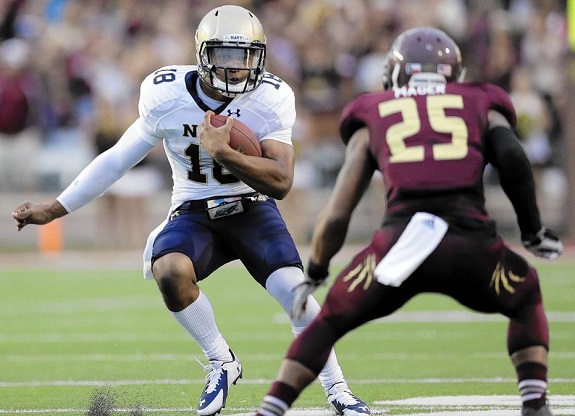 As we delve further into the Pittsburgh Steelers offseason, our attention has begun to shift towards the draft. Live we’ve done in the past, these reports will cover the prospects of the 2015 NFL Draft, placing an emphasis on those who could help the Steelers the most.

An unheralded corner who caught my eye at the Combine. Texas State’s Craig Mager.

– Physical and plays with an edge, gets his nose dirty and active in run support
– Reliable tackler who holds his own in the open field, flashes of being a forceful, impact hitter
– Upper body strength, lacks length but able to shed stalk blocks
– Stays low and shows quick feet in his pedal and shows a fluid turn
– Seasoned player with ample experience in every assignment, can play off/tight man, zone, and asked to blitz
– Good leaper with strong hands, capable of playing the pocket of the receiver
– Explosion transitioning out of his pedal, above average click and close
– High effort player
– Multi-facet special teams value
– Superb amount of starting experience, four-year starter
– Seemingly high character who has dealt with and overcome much adversity in his life

– Short arms, one of the smallest at his position, especially surprising with someone who has average height (29 3/4 inches)
– Must improve eye discipline, gets caught looking in the backfield/underneath routes, loses his zone, and prone to giving up splash plays
– Trusts himself to a fault, late opening up his hips
– Doesn’t appear to play as fast as he’s timed, may fit better in a zone scheme than man
– Questionable hands
– An average athlete with no special movement skills, straight line or change of direction
– Probably has a limited ceiling
– Smaller school and did not play against top flight competition

– 48 career starts for the Bobcats
– At least 48 tackles in each season
– 2014: 63 tackles, 6 TFL, 3 INTs
– 2014 First-Team All-Sunbelt
– Eight career INTs
– Dabbled in the kick and punt return game, starting punt returner in 2014 and one career touchdown back in 2012
– Started on kick coverage in 2014
– Played in three different conferences in four years
– Running back in high school, didn’t make the switch to cornerback until college

Mager has a unique, though difficult, backstory. At 15, he lost his mother to an overdose by an incorrect hospital prescription, who would eventually be found liable of malpractice. Without a father in his life, Mager was forced to help raise his younger sisters – and himself – all while focusing on football and grades. A few years later, his high school’s athletic director suddenly passed away.

As tragically horrific as it is, he points to those events as ones that shaped his character and leadership. And the reason why he chose Texas State. Only 20 minutes from his house, it afforded him the opportunity to stay close to his sisters and be involved in their life.

His coaches pointed that out before he officially became a Bobcat. In a 2010, Mager’s offensive coordinator spoke about it.

“He became one of our leaders. Everybody looked up to him. They saw how he managed himself when it happened and everybody followed his lead.”

The running back turned corner joined Texas State in 2010 as the team competed in the FCS’ Southland conference. In 2011, his first year playing following a redshirt season, they became an independent but still compered against FCS schools.

In 2012, the school made the jump to the FBS level, playing in the WAC’s final year of existence. After it folded, they switched to the Sun Belt, finding stability for the last two seasons. Not much consistency or comfort in the opponents. Probably the only prospect who dealt with that to no fault of his own.

Still, it doesn’t change how Mager is going to look on the field. He’s a hard-nosed, physical corner who is active in run support. Something a Steelers’ cornerback historically must be.

Those mentalities get battle-tested against triple option attacks like Navy. Terrible game to judge coverage skills; optimal to evaluate the ability to set the edge against the run. In the first quarter, Mager helps set the tone with this crushing hit.

Graphic gets in the way a little bit but you can see Mager fight off the cut block and upend the runner later in the same game.

Admire his motor, too. Despite being the outside left corner at the bottom of the screen, he takes the proper angle to the ball, judging it from across the field, and runs the receiver out of bounds.

In coverage, he shows a quick close and ability to play the pocket. Strong hands to knock the ball away, as you’ll see below.

Picture of the same thing. 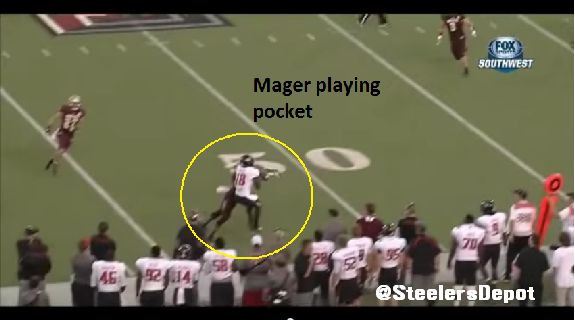 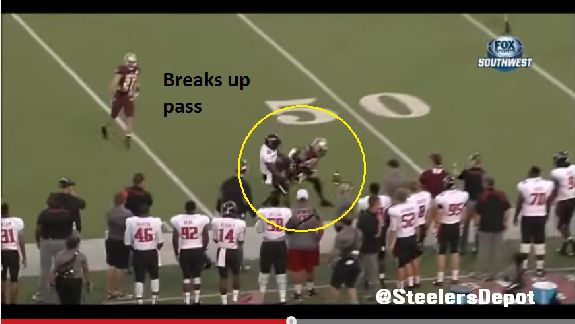 Four-year starter who grabbed the role his freshman year and never looked back. By 2014, the team was comfortable using him in any role. Press man, off man, the deep third in zone, or blitzing off the edge, Mager did it all. In the same game, too. 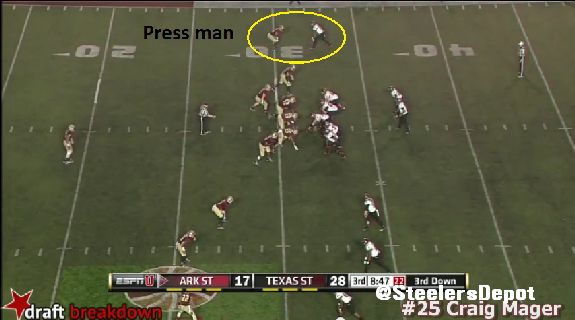 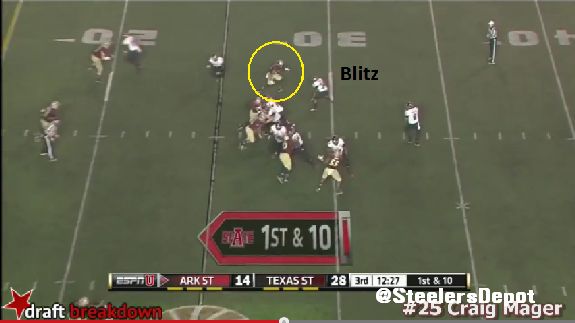 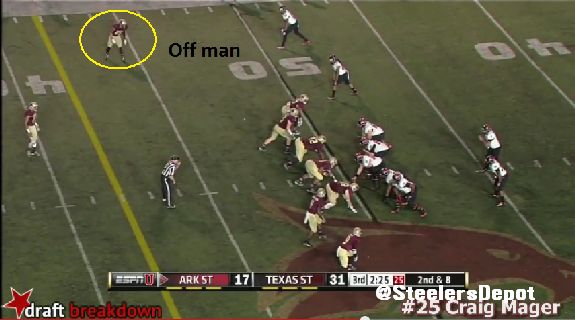 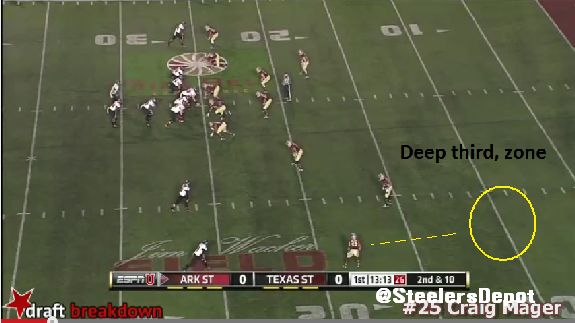 Maybe those four years made him a little too comfortable. A little facetious, of course, but he’s shown a lack of eye discipline, staring down the quarterback or underneath routes that created splash plays. The two examples I saw across three games.

Always reading run against Navy but they use it against him, getting him to bite and throwing the easiest six they probably had all year.

Third and two against Arkansas State. Cover 0. Switch route between #1 and #2 at the top of the screen. Mager is assuming slant, given the down and distance. Can tell he’s ready to drive downhill. Then the receiver stems his route upfield. He can’t work through the #2’s route, is caught trailing, and beat for six.

While he did have a good performance at the Combine, I’d consider his 4.44 40 time to be a little misleading. Don’t think he plays that fast on tape. More in line with his second attempt at Indy, a 4.57. May limit him to a predominant zone scheme at the next level.

He’s a player that caught my eye at the Combine and overall after viewing the tape, is still someone I’m impressed with. Not a perfect comparison but he’s similar to EJ Gaines from last year, a corner I was extremely high on. I liked Gaines more than I do Mager but they offer a similar game. Toughness and character are top-notch and would be welcomed additions to Pittsburgh.

I do have to wonder where his ceiling is at. He could be someone who doesn’t have the athletic chops to hold up and falls out of the league. The Steelers are probably looking for a Day Three corner with more potential, given the sorry state of prospects they’ve brought in the last two seasons – Terry Hawthorne and Shaquille Richardson. But at the same time, it’s hard to find that “perfect” prospect when we’re talking about the later rounds.

If the expectation is for Mager to eventually be a slot corner and core special teamer, I have no issues taking him in the sixth round. With the amount of nickel defenses, it’s nice to have that slot corner who can hold his own against the run. Makes it easier to deal with the loss of your nose tackle.

But if the team drafts him in the hope he’ll become a true starter, they’re likely to wind up disappointed.

Texas State has had some talented players come out of their program. Bob Young played 16 years and made the Pro Bowl twice. Fred Evans played eight years. But Evans in 2006 was the last Bobcat drafted and only two others have been selected since 2000. Mager is going to be the next. Deservedly so.

Games Watched: vs Texas Tech (2013 – skimmed), vs Navy, vs UL-Lafayette, vs Arkansas St