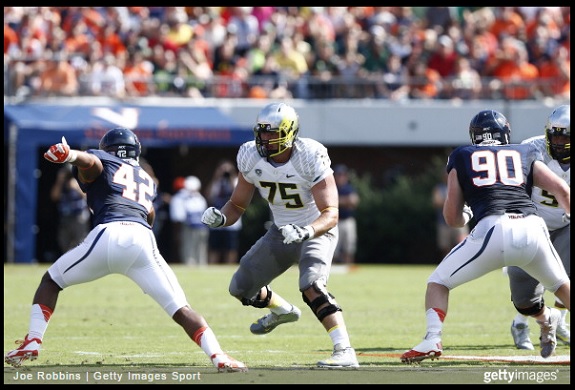 – More muscle, bigger player than his frame indicates but has ability to add weight if asked, plus length for position (33 3/4 arms) and big hands (10 3/8)
– Supremely fluid player in pass protection, smooth, clean kickslide who gains a lot of ground on his initial steps
– Proper base in pass protection, surprisingly exceptional job of sinking his hips and doesn’t show tendency to pop up on contact
– Sticks on contact and keeps legs pumping, very capable of sealing the edge
– Doesn’t look to immediately abandon base around the edge but has the innate ability to recover if initially beat
– Consistently shoots his arms and keeps distance between he and the defender
– Flashed impressive anchor, better core strength than given credit for, able to give ground to avoid getting run over
– Better run blocker than given credit for, sticks and drives on contact, shows a nasty demeanor and desire to finish his blocks, credited with some hard-earned pancakes
– Fluid athlete who can reach and stick to the next level
– Has an overall understanding of hand placement and leverage in both phases
– Experience at both tackle spots

– Can struggle when asked to mirror, recover against initial inside rushes
– Occasionally overextends his top half a little bit in pass protection
– Has trouble as a run blocker versus bigger, stronger DE, won’t always stick and falls off more than you’d like
– Hand placement is sometimes too high in pass protection
– Rarely played out of a three point stance, will have to basically learn that from scratch
– Never had high conference accolades
– Minor injury issues

Fisher was a prospect that jumped out at me during the NFL Combine. Called him one of the big winners of Indianapolis. Predictably, I was anxious to jump into his tape. And I wasn’t disappointed.

Though he is just above the 300 pound threshold, Fisher has a good amount of muscle and doesn’t really need to bulk up, though he has the frame to support it if a team makes such a request.

What makes him special is his pass protection. Starts with his kickslide. Clean, quick, and efficient, the Oregon tackle covers a lot of ground in a hurry. Can only remember one occasion in the four contests I watched where he was cleanly beaten around the edge, and that came from a wide nine tech.

Even facing off against this blitz off the edge, Fisher never loses his base, moves laterally to help seal the edge, and is able to mirror back inside. A lot of tackles would have abandoned their base, lost their technique, and either fail to seal or get beat inside on a counter. Fisher gave the best of both worlds.

Despite being late off the snap, Fisher is able to effortlessly recover with his lateral movement, retaining his base and stuffing the rusher. 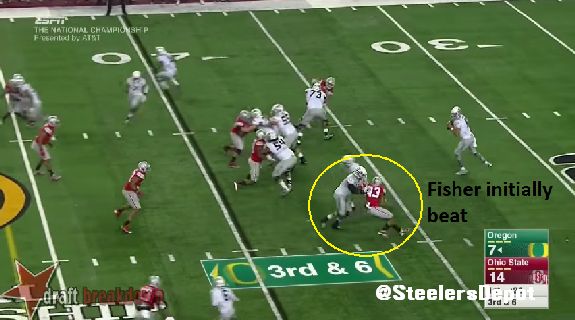 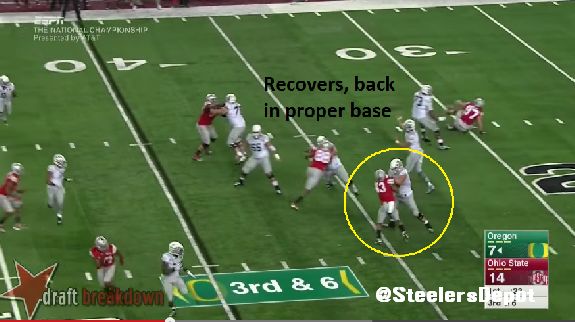 Love the hand work here. Chops the hands of the defender to take control. Hand use is so violent it takes the DE to the ground. Advanced technique for a “kid.”

Some scouts might question his strength and by extension, his run blocking, but I came away pleasantly surprised. He has that nasty demeanor you crave for at the position. From 2013 when Fisher worked at right tackle, he finishes the play by burying the end.

Liked his anchor against the bull rush by the Michigan State RE. Gives a little bit of ground so he doesn’t get uprighted and run over.

There were a couple of instances where Fisher was prone to being beat to the inside. Gains so much ground on his kickslide that he can struggle getting his momentum the other way against initial inside rushes. Hand placement is an issue, too, as noted in his “bad” section. Hands to the face, making Fisher unable to generate power to stop the rush.

When he sticks, Fisher is an above average run blocker, but he can struggle to matchup against bigger DEs. Tendency to fall off the block. Bit of a strength issue but also technical – getting his upper half out in front. Needs to rep on his initial steps off the ball.

Notice what’s different in the above clip? Fisher is in a three point stance. Didn’t have to do it often in the Ducks’ “green light” offense. He’s raw and it shows on tape. Arguably his biggest flaw but one that is clearly coachable. OTAs are going to be a critical time for him.

Statistically, the Ducks’ offensive line did a 180 with Fisher out of the lineup. In the two games Fisher missed due to a sprained left knee, Oregon allowed 12 sacks, falling to Arizona and eking out a victory against Washington State. Following Fisher’s return, they gave up 14 sacks across the next eight games. That’s not a coincidence.

Many draftniks are starting to take notice but I might be even higher on Fisher than anyone else. He needs to rep blocking out a three point stance but that aside, has few flaws. An above average run blocker with a mean streak and a terrific pass protector.

It doesn’t mean I’m mocking him to the Steelers, that’s not going to happen, but if I was putting a board together, he might just be my top tackle.