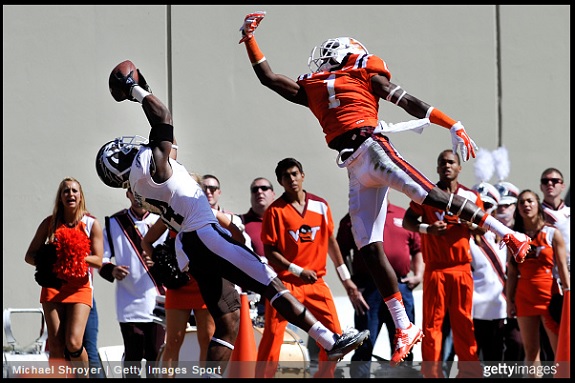 – Quick feet who is low in his pedal and fluid in his turn
– Physical, fearless nature that makes him a willing competitor against the run
– Excellent vertical who times his jumps well, competes at the ball’s highest point
– Strong hands and plays with good technique that allows him to play the pocket and break well-thrown passes up
– Experience playing press and off man
– Received some work throughout career as a return man
– Fiery, competitive player who brings a lot of energy, but doesn’t lose his cool and appears to have a sound mindset
– Became more productive each year, as you’d hope/expect
– Even-keeled player who looks the same game-to-game
– Durable, no injury history
– Lots of starting experience, full-time starter since sophomore season

– Must become more consistent, reliable tackler who is willing to wrap up and adjust his tackling angle
– Too often goes for killshot, prone to missing tackles and has trouble breaking down in space
– Smaller frame makes it difficult for him to bring down bigger runners
– Didn’t time well and fair to say he has questionable long speed, will not be a fit for every scheme
– Could stand to be a little more explosive out of his pedal
– Played only left cornerback, currently position limited
– Did not always play against top competition

Celiscar is a prospect that has been given a lot of love from certain readers on this site. Value their opinion and wanted to get to know him better.

He’s a seasoned defensive back that loves to hit. The tackling numbers, 63 this year and 79 in 2012, are evidence of that. His technique leaves a lot to be desired but when he squares you up, he’s bringing you down.

This was the first play I watched on him. And man, it was as good of a first impression as I could ask for. We’ll pick it up in the GIF below with the quarterback checking it down to the back, who dances and eludes a few defenders before Celiscar comes screaming in and cleans it up.

Doesn’t pass up the chance to level the QB, bringing Michigan State’s Connor Cook to the ground with a thud.

Competent with the ball in the air, too. Those pass breakups weren’t accidental. Watch him locate, attack the ball at its highest point, and break the throw up in the NFLPA Bowl Game.

Against the Spartans, the best competition he faced, Celiscar gets back to being “in-phase” with the receiver and separates the hands to create the incompletion.

As I’ve alluded to, in the run game, his technique leaves a lot to be desired. Doesn’t always show the willingness to break down, sink his hips, bring his arms, and wrap. Tackling point needs leveled out, see it too low or too high, and he has a tendency to lead with his shoulder for the knockout blow.

Scariest consequence of that came in Week One of the 2014 season against Purdue. Knocked himself out cold with this hit, immediately producing the “fencing response” of the arms being locked in the air. Miraculously, and perhaps suspiciously, he played the next week.

Goes low in the open field and is shrugged off by the much bigger Jeremy Langford.

He does seem to be position limited, only lining up as the left cornerback on 95% of the plays I watched on tape. Only time he played anything else was some work in the right slot against twin receiver sets.

Celiscar isn’t getting much recognition in draftnik circles. Some of that is to be expected. With the gluttony of the position that always exists, it’s difficult to stand out.

But he fits the Steelers’ scheme well. Doesn’t have the long speed to play in a predominately man scheme. Meshes well with the Steelers’ zone defense. Physical player who is willing to set the edge and not afraid to get his nose dirty. Absolutely critical for the team. And he does a nice job competing with the ball in the air.

I’d certainly give him a draftable grade. Well-deserved of a 7th round selection and I’d even consider taking him with the Steelers’ 6th round compensatory pick.