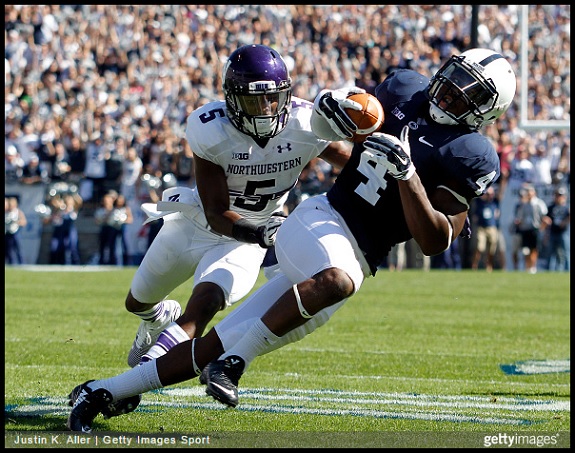 – Maybe doesn’t have elite bulk, but some muscle and great length (32 1/4 arms)
– Big hitter who seeks contact and is fearless in the hole
– Form tackler who brings his arms and tries to wrap up
– Above average straight-line speed
– Solid change of direction, short-area quickness and no stiffness in his hips
– Plus click and close who reacts quickly and gets downhill
– Versatile and played all over the field, sometimes used like an outside linebacker more than an actual safety
– Well-rounded safety who is apt in coverage and can support the run
– Durable, no injury history, never missed a game
– Lots of starting experience

– Little less muscle, leaner than I anticipated
– Late in diagnosing, reacting to plays, takes himself out of it too quickly
– Probably doesn’t have as good straight-line speed as he’s timed
– Wasn’t an impact player and disappeared at times
– True position at next level could be debatable
– Statistically average production in 2013
– Never received any major conference accolades

Amos has all the baseline traits you want in any position. Speed, fearlessness, and versatility. Sometimes, an already complicated draft process doesn’t’ need to be made any worse. Amos has the goods.

Flies in downhill to cut the running back on this swing route. Troy Polamalu would be proud.

Shows off in coverage, finding the ball and using his impressive length to swat the ball away.

Has to develop better eye discipline and be more patient with his reads. Have watched him get caught and take himself out of plays too often, like below against Indiana.

He did run in the high 4.3’s at his Pro Day but those numbers are always a bit misleading. His speed is good but probably not that good.

The tape wasn’t limited but Amos wasn’t particularly involved. Just 42 tackles speaks to that. Don’t see that as fault of his own but it would’ve been nice to see him involved more, if only to learn more about the type of player he is.

I arguably learned just as much about where he lined up as I did how he actually performed. Amos was used all over.

As a true deep safety. 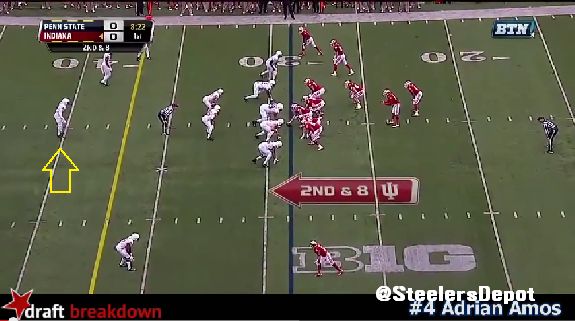 In coverage as a slot corner. 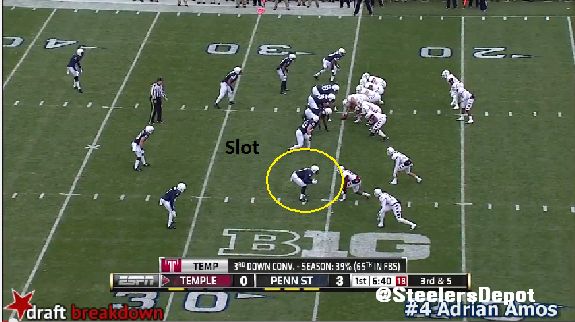 Or blitzing as the nickelback. 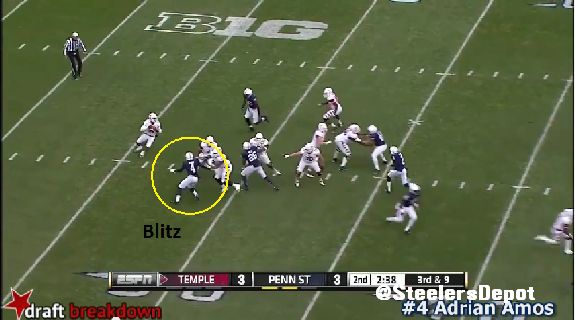 He played man, the deep half, and hook zones. No assignment will be foreign to him and that versatility will be a boost in his value.

In a weak class, that multiplicity is really going to help him stand out. Especially in the world of sub-package defenses that exists today. He might not be as talented but he could be used the same way the Arizona Cardinals use Deone Bucannon.

Amos isn’t a flashy prospect but “checks all the boxes,” as the term goes, for what you’re looking for in any position. Could cause him to go a little higher than some anticipate.

Games Watched: vs Ohio St, at Indiana, vs Temple