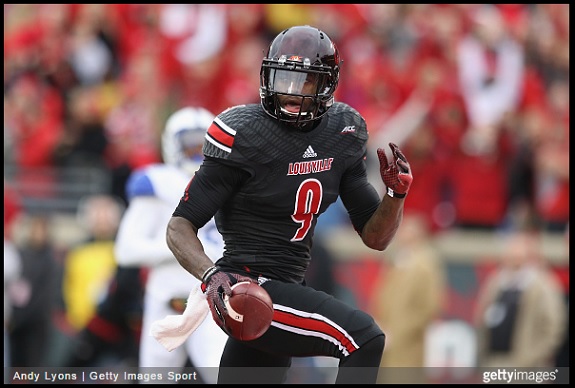 Breaking down one of the top receiver’s in a class chalk full of talent. Louisville WR DeVante Parker.

– Long, leggy receiver with elite arm length (33 1/4 inches)
– As natural of a hands catcher as you’ll see, consistently extends his arms away from his body, giving him a mammoth catch radius
– Terrific body control, contorts body to be able to adjust to poorly thrown passes both while in the air or on the ground
– Strong leaper who times his jumps perfectly and meets the ball at his highest point
– Body of work suggests the ability to be a vertical threat even without top-end speed
– Overall, polished route runner who doesn’t drift in his cuts nor taking false steps out of his break
– Short-area quickness, lower body strength to generate explosion to win off the line, above average change of direction
– Quick to the tuck following the catch, no wasted motion to his game
– Frame makes it difficult for smaller defenders to bring him down, will bounce off or run through poor form tackling
– Seems to have a short-term memory who doesn’t let mistakes dog him
– Versatile with experience playing in the slot and on the outside
– Took over certain games, at times, was seemingly unstoppable
– Statistical affinity for the end zone, impressive touchdown numbers

– Does not play to timed speed (4.45), and doesn’t have the second-gear to make him a traditional vertical threat
– Would like to see him more explosive out of his breaks, a bit too methodical, and would help improve his separation skills
– Disappointing run blocker given size and length, below average and doesn’t always give the effort he could
– Coming off injury in 2014 that limited him to just six games

Parker became more impressive to me as I continued to watch him. He isn’t the burner Kevin White is but that doesn’t mean he can’t be a vertical threat. Vertical threats can win with speed or size. It’s why someone like Kelvin Benjamin is a downfield weapon.

Parker doesn’t have the height or weight but he has supreme length with 33 1/4 inch arms. Better than White or Amari Cooper, tops the 6’5 Dorial Green-Beckham, and ties fan-favorite Darren Waller.

He knows how to win with it, too. Soft, natural hands catcher who gets his arms away from his body. Gives him a big catch radius. Few prospects do it better than Parker.

For the record, this touchdown was negated by Parker stepping out of bounds but it doesn’t change the arm extension and soft yet strong hands, snatching the ball in front of the corner. 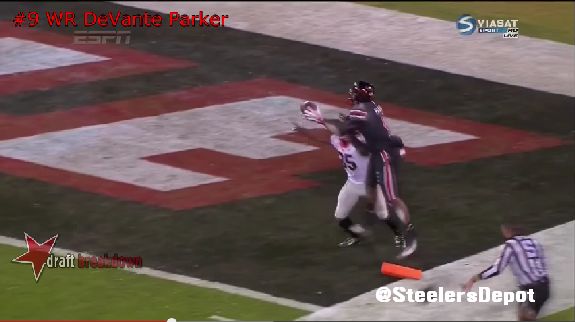 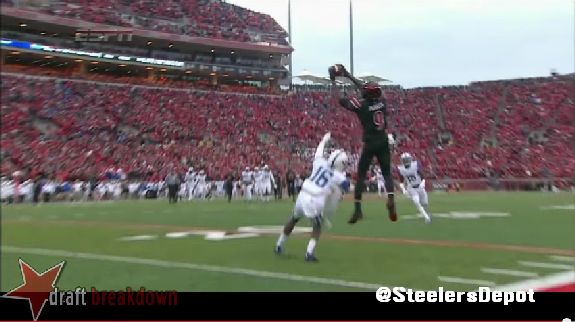 His stats in that Kentucky game were straight stupid. Six receptions, 180 yards, three touchdowns. Domination of the highest order.

Makes this grab on a pass thrown behind him against Georgia. Thought it was especially notable after his last target went through his hands, resulting in an interception. Short-term memory to make a difficult grab on the next opportunity. 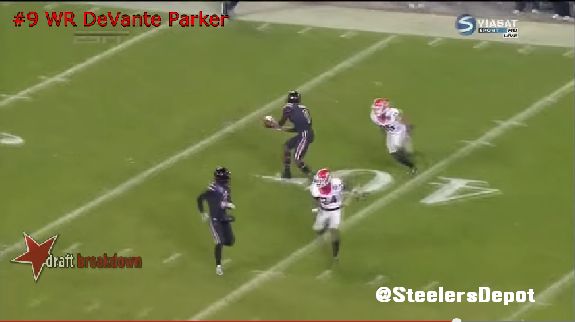 Statistically, Parker would have had a monster 2014 campaign had it not been for the foot injury. Extrapolate his numbers and you come up with the following line: 93 receptions for 1852 yards and 10 touchdowns.

There’s some short-area quickness to his game. Couple that with his size and strength and he can be a headache to wrestle to the ground. Especially for smaller defenders. DBs better come with sound technique when trying to tackle number nine.

Turns this screen into a first down on 3rd and 20, making multiple defenders miss in the process.

Aside from the lack of top end speed, which is tough to show in GIFs and pictures, I would like to see him grow as a run blocker. Fails to get square to PJ Williams, letting him attack the runner. Missed tackle by the corner bails Parker out but still a negative grade from the receiver.

A guy with his size and arm length should look better on tape.

Bottom line is his flaws are minimal. He does lack that top end speed and explosion but as I’ve shown, can still be a vertical threat and will dominate over the middle, especially if he gets a little more explosive out of his cuts.

The Steelers have talked to Parker although it should be pointed out that could be a team performing its due diligence or as I’ve pointed out, getting some information on his teammates (OLB Lorenzo Mauldin and CB Charles Gaines).

Is it crazy for the Steelers to be considering a wide receiver early? Probably. Then again, this is a team that ran 11 personnel – three receivers on the field – a whopping 64.5% of the time in 2014. That’s one injury away from having, currently, Darrius Heyward-Bey be the #3. I’m queasy.

All I do know is DeVante Parker is a heck of a prospect. And if you were going to build a board based on pure talent, the odds are good he’d be near the top of the Steelers come pick 22.

Games Watched: vs Florida State, vs Kentucky, vs Georgia (Bowl)