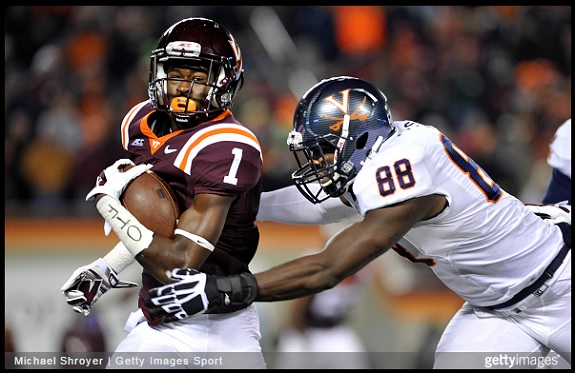 A breakdown of one of the Steelers’ pre-draft visitors. Virginia OLB Max Valles.

– Above average strength capable of holding the POA and setting the edge
– Gets his arms extended and knows how to create space between he and his blocker
– High football IQ, shows good awareness as a pass rusher who routinely gets his hands up if he can’t get to the quarterback
– Flashes some natural bend around the edge
– Versatile player with an abundance of experience playing out of a two point stance, work in subpackage football as an off the line linebacker who was often asked to drop into coverage
– Quality motor and high-effort player
– Productive 2014 campaign
– Young and optimistically, has room to grow

– Inefficient pass rusher who lacks any moves and too often disappears when one-on-one with the tackle
– Sacks were created by scheme than individual talent
– Not a quick-twitch athlete, better in a straight-line
– Initial explosion upfield is average, struggled to even beat college right tackles
– Too easily pushed up the arc, only wins the edge with a clean win, has trouble dealing with contact upfield and easily knocked off balance
– Capable of holding POA but struggles to shed blocks and finish plays
– Limited starting experience and playing time against top competition, two years of Division One football

It’s disappointing Valles isn’t an effective pass rusher. There’s some traits to his game that really make him a logical fit in Pittsburgh. And the team has responded by bringing him in for a visit.

He’s been used similar to how the Steelers use their OLBs. Played with his hand up the majority of his time and in subpackages on third and long, would often line up at ILB. Things Jason Worilds did routinely last season. According to my chart, on 3rd and 7+, he lined up at ILB 50 times. 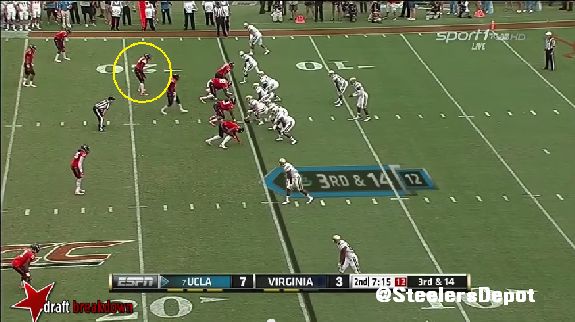 Pre-draft visit is a great opportunity to pick his brain a little bit about how the Cavaliers’ used him.

Valles is Alvin Dupree like in the sense he was used more often as an OLB than a DE. Comfortable playing with his hand up. For such a young guy, three years removed from high school, it is impressive.

Though he still as to grow against the run, he’s better at holding the edge than a lot of players at his age. Working against the TE as the ROLB, he sheds the block spills the runner back inside. What you’re looking for. Slow the back up and send funnel it to your help. Results in a one-yard loss.

Admire his awareness and football IQ as a pass rusher. Against Louisville alone, he batted down four passes. On the year, he’s credited with eight breakups. Third on the team.

Shows his IQ in coverage. Reads screen off the snap, fends off the block, and then jumps in front of the running back for the pick six.

Though can hold the edge, Valles struggles to shed in the run game.

Lacks any hand use and doesn’t have much of a repertoire. Causes him to get stuck on his blocks as a pass rusher. Unable to disengage. LOLB, bottom of your screen in the GIF below.

This wound up to be a sack but you can see Valles stuck on the right tackle. After several seconds, he finally gets away but it’s obviously a coverage sack more than anything Valles did.

Both of his sacks against UCLA were fluky. The above one and another where he came free twisting inside on a stunt.

Though the UCLA game was the first of the year, and Valles is going to be as raw as any tape you’ll see, it illustrated how he struggles to win the edge when dealing with contact or winning clearly with his initial steps. No bend, no hand use, no chance of reaching the QB’s landing spot.

Despite finishing tied for third in sacks in the ACC, and second in sacks per game, he was only voted to the third team all-conference team. And that wasn’t because he was lumped in as defensive end with the likes of Vic Beasley and Eli Harold. He was listed as a linebacker, finishing last in votes to make the team at all. Shuffled behind another teammate, Henry Coley, and names like Reggie Northrup and Cameron Lynch.

Valles is the type of prospect the Steelers’ gravitate towards and it wouldn’t be a surprise to see him wind up in Pittsburgh. Young but with the experience playing a position most don’t have coupled with an athletic background.

But he’s raw and doesn’t have the change of direction the position requires. I want to love him, and get the hunch the team values him a lot more than I do, but he’s making it tough. Classic potential pick that makes scouts love him and coaches a bit more leery.

Games Watched: vs UCLA, vs Louisville, vs Pittsburgh, vs Miami (FL)