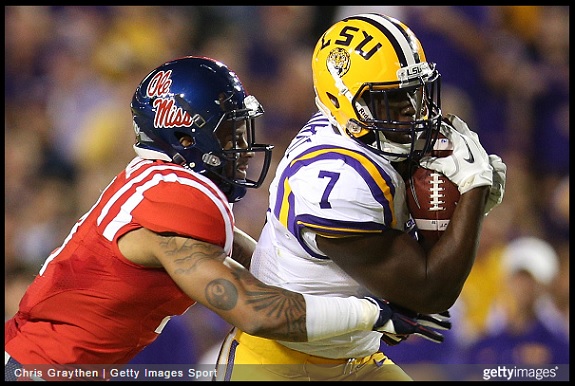 Steelers fans have been banging on the table for cornerbacks who can actually contribute in games and fulfill a contract. Here is one underrated and undersized cornerback who I think fits that bill: Senquez Golson.

-High effort player, very passionate
-Very physical, not afraid of contact and does not shy away from it
-Great at tracking the ball in the air and making plays
-Very willing run defender who can be a hard hitter at times
-Extremely athletic
-Ballhawk, has excellent hands
-Ran a 4.44 40 and plays just as fast or faster
-Good at sitting in receiver’s pocket, doesn’t allow much separation
-Displays leadership on field
-Reliable open field tackler

-Not tall, may be limited to slot corner at NFL level
-Isolated incident with the law, character flaw
-Extremely light at 176lbs
-May be limited to the slot in the NFL
-Not much experience in press man coverage
-Needs some open field tackling refinement, goes for the big hit and leads with his head at times
-Due to his size, has some trouble shedding blocks – but effort is always present

I was impressed with Golson. I had my pre-opinion that at his size he was going to get bullied and taken advantage of but that really wasn’t the case. He displayed some nastiness and tenacity throughout his gameplay. Surprisingly, he was not bullied and washed away in the run game. Don’t get me wrong, at times he was well blocked and not involved, but his effort is relentless. Golson’s passion for the game is extremely evident on tape. Very fun to watch and I was impressed.

Don’t be alarmed, the wide open receiver was not Golson’s responsibility. What you love to see is the high effort and speed you get from him. Look as he tracks down the ball carrier and shows a great attempt of a strip.

After watching this GIF you’re probably going to think this was a mistake. Not at all. Golson is rarely in press man, but he is here. He must convince NFL GMs and head coaches that he could give quality snaps on the outside. While in the press, he is in the receiver’s pocket the entire time, not allowing him to separate. This allows the safety to help with ease and an interception is forced.

Golson’s 4.44 40 time was displayed on tape many times, and times like this below; you may even conclude that he plays faster. At the 1-yard line and Golson comes across the line of scrimmage and makes an incredible tackle on Jay Ajayi, who is 45 heavier than him to prevent the touchdown.

Golson’s almost constant off-man or zone, which gives opposing quarterbacks opportunities for easy shorter yardage gains. Here, he is 8 yards off the ball and it is 3rd and 10. You would like to see him pressed up a tad more. The receiver takes advantage of this cushion and runs a post route, cutting right in front of Golson for the first down.

At 176 pounds, you don’t expect many big hits. Here is an example of what Golson is capable of. He reads the play quickly and recognizes it is a screen. He takes a sharp angle to the receiver and delivers an explosive hit with excellent form. Would love to see this more often.

Excellent patience and willingness to attack to make the tackle. Solid play.

Boy, at 5’8” and a vertical jump of 33” I was not expecting this. Especially over a receiver who is 6’6”. This is where the baseball player in him is expressed. His ability to track the ball and use his excellent ball skills is just exceptional. Displays it here.

In open field here, this should be an easy tackle for Golson but he whiffs it. Went for the big hit and just simply missed. Would like to see him break down and use proper form to wrap him up.

Giving a little too much cushion here, the pass was in the receiver’s basket but the hard hit from Golson prevented the completion. That is NOT why this GIF is here; it is because of the aftermath.

Golson gets shoved pretty hard by an angry Mississippi State player and two of Golson’s teammates start to charge at the player. Golson quickly halts them and proceeds to give a little talk to them. This displayed great leadership ability to me and the ability to control his self and not overreact.

Overall, I like Golson. Maybe a little too much but for good reason. He was not targeted too often and teams seemed to not want to run in his direction very often. When Golson was targeted, he surely took advantage, snagging 10 interceptions and defending 19 passes. This is impressive; especially in the SEC.

No doubt Golson’s size is a concern. You’re not drafting an outside corner here; you’re drafting a slot corner who can give you outside snaps if need be because he has the experience to do so and has excelled at it.

He has an off field issue as well:

According to Gautier police spokesman Jerry Cooksey, Golson was on foot at the intersection of Woodbury Road and Chesswood Road in a residential area near Shepard State Park in Gautier at around 4:50 a.m. Police asked the shirtless Golson to identify himself and he refused to give his name or provide proper identification. Golson was arrested for failure to comply with the officer and booked at the Gautier Police Department and later transported to the Adult Detention Center in Pascagoula, from which he was released after posting $1,000 bond. “[I don’t know] if I was more mad about him arresting me in my yard or because I asked him to knock on the door and ask my people for a shirt,” Golson said in regards to the arrest.

If the Steelers were not comfortable with this isolated incident, then they would have never brought Golson in for a pre-draft visit. He will offer great special teams value the first year while he learns the defense. His 4.44 speed could very well be used and he could easily make a name for his self this way.

I believe Golson has the talent and ability to be a future starter. William Gay is coming off one of his best years, but has limited years left under his belt. Cortez Allen is coming off his worst season and is currently a huge question mark and maybe even a liability. The Steelers need four competent corners to compete in the nickel defense at a high level, in which they were at nearly half of the time last season. Golson is best fit in an off-man and zone coverages but can play in a press man if needed.