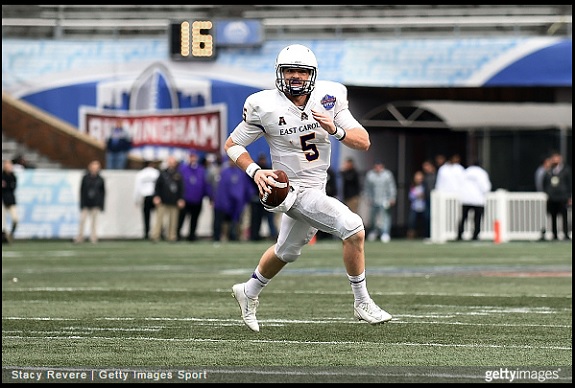 Late in the draft process but wanted to at least glance at quarterback for, if nothing else, completeness sake. We’re breaking down East Carolina’s signal caller Shane Carden.

– Lacks overall frame but solid weight with proportionally positive hand size (9 3/4 inches)
– Has the pure arm capable of making every throw on the field
– Throws a pretty deep ball, above average, though far from elite strength, but impressive accuracy and ball placement
– Accurate while on the move, squares his shoulders, will be an asset on bootlegs/rollouts
– Shows ability to read the whole field and go through progressions, not a one read and run type like some spread quarterbacks
– Tough quarterback who will stand tall in the face of pressure, willing to take a shot to make a throw
– Mobile and shows ability to extend plays with his feet, forces defenses to account for him
– Regarded as a hard worker and competitive who did anything to earn a role and help the team
– Wildly successful career, numbers are off the charts
– Several accolades and school record-setter
– Fantastic bloodlines, comes from an athletic, competitive family

– Shorter than your ideal quarterback and susceptible to getting passes batted down at the line
– Awful arm mechanics, long arms only compounds windup (33 1/4 inches), ball away from his body and tendency to drop down to his hip, risk factor to fumble
– Plays with too narrow of a base, sapping him of velocity and zip, front leg locks up and isn’t able to drive the ball like he should, weight transfer issue
– Short to intermediate accuracy needs serious improvement, forces receivers to adjust too often
– Seemed to develop more wobble on his throws over the course of the season, wonder if poor arm mechanics led to a dead arm
– Lacks an ideal feel for the pocket, doesn’t always climb and when he does, seems a bit anxious to run
– Will take too many risks and force throws, especially when he senses pressure
– Did see a few reps under center but played in a primarily shotgun based offense
– Straight-line speed but not a dynamic runner who won’t make many miss in the open field
– Mixed results against top competition

– Three year starter for the Pirates
– 2014: Over 4700 yards passing, 30 TDs, 63.5% completion percentage, 6 rushing TDs
– AAC Conference Player of the Year in 2014, 2013 First-Team Conference USA selection
– Threw for just under 12,000 yards in his career, 86 TD passes, 30 INTs, 24 rushing touchdowns
– Holds school records in passing yards, touchdowns, and completions
– 26-13 career record
– 1-2 bowl record, 1-1 against ranked teams in career
– Initially lost out on starting job in 2012 but gained it three games into the season
– Two career receptions, one touchdown
– Comes from a school that has produced QBs, Jeff Blake and David Garrard are the most notable
– Three year starter in high school, passed for over 1800 yards and 17 TDs senior year of high school while rushing for 1319 yards over his career
– Father was a pitcher, spent eight years in the minor leagues with the Mets, Angels, and Expos
– Mother was a volleyball player at Cal Poly, first female at that school to ever earn a scholarship
– Two brothers, both were college pitchers
– Uncle started one year at quarterback for USC in 1980

Carden is, of course, the first quarterback I’ve watched. Let me make it clear I have no interest in projecting one to the Steelers. There’s absolutely so need and I don’t think they will even sign a UDFA following the addition of Tajh Boyd. Don’t subscribe to theory of “developing” a late round QB, either.

But I loved watching Carden the few opportunities I had and it’s nice to be well-rounded. If I am able to produce reports on Jameis Winston and Marcus Mariota, it’s smart to refresh myself by watching a lower-tier prospect, too.

He throws a nice deep ball. His accuracy with it is what I admire most. Watch him rollout, set his feet, and hit a moving target come across his field. Certainly not Carden’s fault the pass was dropped.

Shows off some serious arm strength here. Comeback from the far hash? Has to be the most difficult throw in football. Again, pass is dropped, and you could argue it tailed off at the end but that ball is only where the receiver can get it. A catchable ball.

Guy is your classic, competitive, get-knocked-down-get-back-up type who really earned his role. Scout team MVP early in his career. He played quarterback, running back, wide receiver, and tight end on the scout team. Whatever he could do to make himself an asset.

It’s easy to knock him for playing in a shotgun, Air Raid type offense. But that’s lazy scouting. Carden was asked to go through his reads and at times, read the entire field. That isn’t a new or huge hurdle for him.

First read to the right isn’t there, feels some pressure, slides, comes back across the field, and fires.

Pass does look a little behind, which is one of his issues.

Let’s delve into those negatives. Mechanically, he’s a mess. Upper and lower body. Up top, he has an ugly, long, throwing motion. Pitcher-esque windup. Look at the ball away from his body and drop to his hip. Long arms doesn’t help matters. 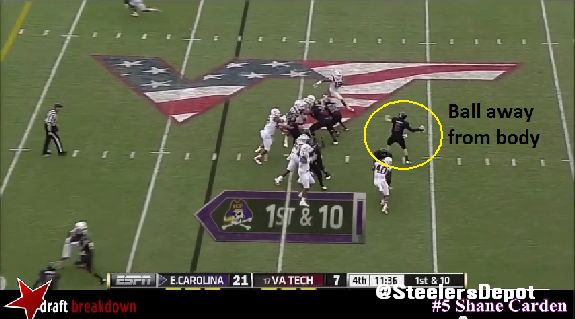 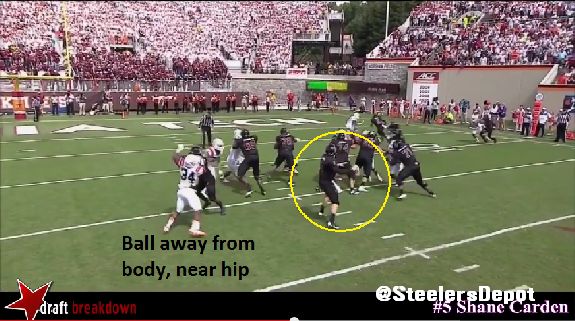 Intermediate accuracy is below average. Misses badly on some throws. This was the most egregious. Mesh concept on 4th and 4. Creates the rub you’re looking for but Carden, with a clean pocket mind you, throws it behind. Forces the receiver to slow down, allowing the Gator DB to catch up and stop him short. Carden cost his team the down.

His lower half is narrow, even for a short QB. Poor weight transfer and doesn’t drive off his front foot. Throws are all arm.

Clean pocket, tough throw, no reason not to step into the throw and rip it.

Picture of it on another throw. Didn’t get the velocity behind it and the ball was late on this curl. 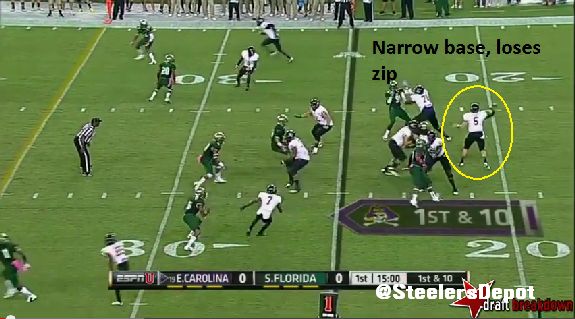 Wondering out loud if he developed a tired arm. Watched him at the beginning of the year and threw a nice, tight spiral. As the season went on, his passes started to show some wobble to them. He claims his arm felt good but the tape indicates otherwise.

We’ll stick with the Florida game, an unimpressive showing against relatively good competition. Pressure from the edge. Looks to fluster Carden who makes an awful decision to throw into double coverage over the middle. Deservedly intercepted.

I’m not one to dole out comparisons too often but he feels almost identical to Jake Locker. I dusted off my old scouting report on Locker and it reads scarily similar. Here’s my take on Locker, back in my scouting infancy. 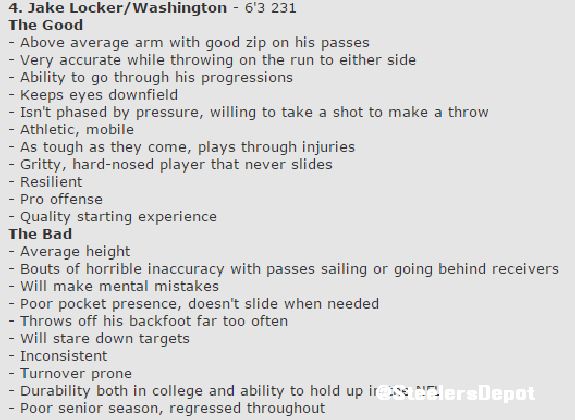 I envision a similar fate for Carden, minus the first round pedigree. Throw in a dash of Tim Tebow, too. Some parts about his game I love but it’s not enough to make me think he’s going to be able to overcome it. Doesn’t get a draftable grade from me.

Games Watched: at Virginia Tech, vs USF, vs Florida (Bowl)