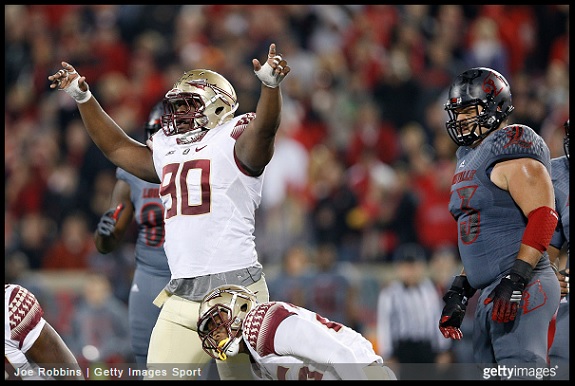 – Prototypical size with above average length and huge hands (33 1/8 and 10 1/8 respectively), certainly looks the part
– Country strong with a big lower body, nice anchor and difficult to move
– Holds POA well, uses hand placement, strength, arm extension, and leverage, even holds his own against double-teams
– Shows awareness and hand use to stack and shed in the run game
– Unique movement skills and nimble feet for a big man
– Strong hands create a forceful punch as a pass rusher
– Effective pass rusher who shows strength to collapse the pocket and active hand use, an arsenal of moves and has ability to shed opposing lineman
– Played a high volume of snaps, including in subpackage football, and has an active motor
– Has dominant tape and can see all the traits you look for at the position
– Statistically strong 2014 campaign
– Shown rapid progression in career

– May wear down at times, sometimes uncharacteristically turned out of the hole
– Could do a slightly better job staying square to the line, avoiding turning his shoulder and getting sealed
– Expectedly, will still get taken off in some obvious pass rushing situations
– Overall, tape is a bit inconsistent but could be a result from the bar being set so high
– Minor injury issues in 2014

– Two year starter
– 2014: 35 tackles 8 TFL 4 sacks 1 FF
– Breakout 2014 year compared to 2013 (3 TFL 2 sacks)
– Missed three quarters of the ACC Championship game with a right ankle injury, wasn’t able to work out at the Combine because of it but did not miss any other game time
– Ran a 5.12 at his Pro Day
– Five-star recruit out of high school, top five defensive tackle nationally by nearly every publication
– Senior year of high school: 38 tackles 23 TFL 15 sacks 5 FFs
– Chose Seminoles over Alabama, Auburn, and Miami (FL) along with several others

There is a lot to love about Goldman. As I talked about in today’s Chalk Talk, defensive lineman are being asked to be complete players. Strong enough to hold the point of attack against the run but athletic to flow laterally and generate pressure as a pass rusher. Goldman checks all of those boxes.

The first game of tape I put on, against Louisville, was his best.

Watch him anchor against this initial double-team. Then, he shows leverage and arm extension to get under the pads’ of the center as the guard peels off on his combination block.

Quick swim move makes short work of the center as Goldman flashes his ability to shed as a pass rusher.

His other games weren’t quite as good but that’s a product of the bar just being set so incredibly high. Check out the arm extension to create space, flash quick hands with a swim, and dip the edge before the ball is out. Again, this is tape of a 336 pound nose tackle. That’s what makes it so special.

Check out his first step. Engaged as everyone else is getting out of their stance. I know being over the ball helps but this is still tremendous. 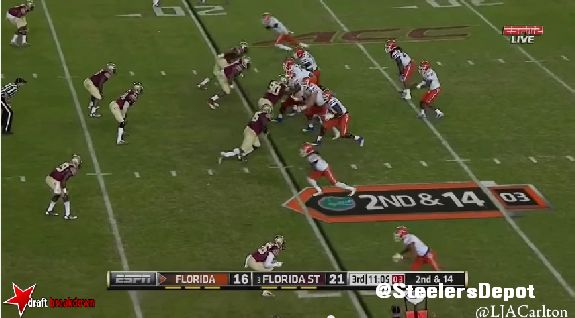 Functioning as the RDT in the clip below, you can see Goldman get his long arms extended, play low – not always a guarantee for a player who is 6’4 – and anchor. Finishes by taking control and driving the lineman off his feet and into the Earth.

This is the kind of player I want rushing from the interior. Strong punch to shed the left guard and though he doesn’t get to the QB, you can see the quick feet and athleticism to get upfield. He isn’t a Casey Hampton lumbering type.

Negatives are scarce. Occasionally washed but that’ll happen to almost any player working among the interior. Important to show some sympathy to those guys. No one is perfect. Here though, we see an example of that. Goldman is the RDT.

If you heard me on The Terrible Podcast, I was fairly dismissive of the idea of Goldman being a candidate for the Steelers. There are still some very good reasons against it – namely positional need and the increase of sub-package football – but from a pure talent standpoint, Goldman is going to be one of the top players on the Steelers’ board come April 30th.

Factor in the history – the school and the fact he’s an underclassman, and the team making him their first round isn’t as far-fetched as it initially may seem.

Games Watched: at Louisville, vs Miami (FL), at Florida