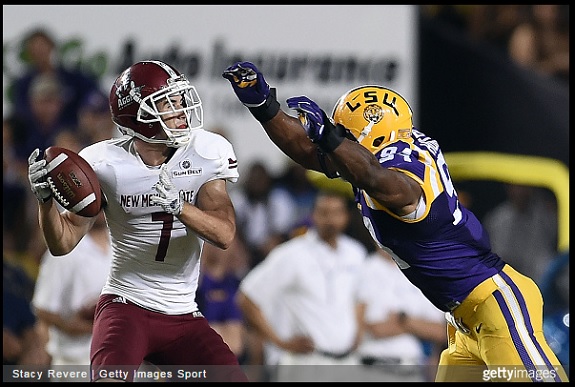 An edge rusher with a ton of upside. LSU’s Danielle Hunter.

– Impressive frame, measurable are as top notch as you can ask for, great length and hand size (34 1/2 and 10 1/2 respectively)
– Tantalizing overall athlete, long-strider who covers a lot of space and shows the ability to close quickly
– Highly impressive player when he puts it altogether, brimming with potential
– Flashes a great first step off the ball, disruptive and penetrator against the run when he times the snaps correctly
– Exhibits natural bend to dip and flatten the edge
– Attempts and does show active hand use as a pass rusher
– Rush moves aren’t always effective yet but shows a variety of approaches and has built foundation for a strong repertoire
– Gets full arm extension and uses natural length to give himself a wider tackling radius than most
– High effort player, motor and athleticism to flow and close on the runner
– Showed noticeable improvement as the season went along
– Experience rushing out of a two and three point stance

– Thin frame that he must grow into, reminiscent of former LSU OLB Barkevious Mingo
– Ineffective pass rusher who has trouble shedding despite active hand use, lacks strength in his punch
– Lacks a “go to” move, let alone any counters, work in progress pass rusher
– Zero functional strength who isn’t able to collapse the pocket as a pass rusher and is easily moved around in the run game
– Lack of strength makes him vulnerable to getting shoved up the arc
– Must be more physical and nasty at the point of attack
– Tape improved as year went along but questionable football IQ, young and still learning, caused him too often looked lost and unable to play assignment-sound football
– Inconsistently late off the snap, doesn’t always time it properly
– Rarely dropped into coverage
– Troubling lack of sack production, no seasonal accolades in career

Hunter is one of this year’s classic, high-on-potential, low-on-quality-tape prospects, a phrase I’m pretty certain I just made up. You have to look for it but you can find moments of the tape that makes you realize what scouts are clamoring about.

It took the fourth game but this play audibly made me say “wow” to myself. Quick spin move to beat the tackle and then bends and dips the edge to get upfield and to the quarterback.

Despite being late off the snap, Hunter shows explosion to get upfield and beat the pulling guard. Gets in the backfield for the TFL.

His awareness improved as the year went on. We’ll show examples of how lost he looked earlier in the year but it did, as you’d hope and expect, get better. Hands up as a pass rusher to knock this pass down.

But there’s a lot more negative tape available on Hunter. Absolutely no functional strength who doesn’t generate a push in the pass game and has trouble holding the point of attack versus the run.

Lined up as the RDE, Hunter is washed out of the hole by DJ Humphries’ base block.

Watch him get blown out of the hole by the Mississippi State fullback. No strength to anchor and absorb.

Wisconsin was chalk full of tape of him being washed. Early in the game, first contest of the year, Hunter quickly loses the edge, allowing Melvin Gordon to get upfield for a big gain.

Hunter tries hard as a pass rusher. Shows active hands but he’s obviously underdeveloped and lacks the ability to shed. Does nothing to threaten Notre Dame’s left tackle. Hand use, spin move, none of it is effective.

Three early to mid-season games in and I didn’t want to do anything with the kid. But as the year went on, especially against top-rated Alabama, I saw what scouts and other draftniks are saying. Still, Hunter is unquestionably green. Health-hazard type raw. I’m not sure what his background is but I have to wonder out loud why he declared a year early. Really needed to stay in school for his senior year.

That doesn’t exactly fit what the Steelers’ current outside linebacker situation looks like. But it’s easy to fall in love with the potential. Someone will.

Games Watched: vs Wisconsin, vs Mississippi St, at Florida, vs Alabama, vs Notre Dame (Bowl – Half)