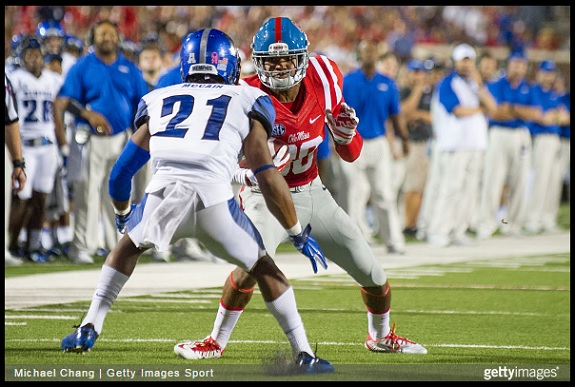 – Good football IQ, reads the WRs eyes, and does a nice job finding the football
– Reaction time and IQ allow him to close on the football in coverage
– Shows physicality at the line, experience and competent in press coverage
– Versatile, played all three cornerback spots, and use on a variety of assignments, press/off coverage, frequent blitzer
– Willing to hit/tackler, get his nose dirty in the run game
– Productive senior season and career, ballhawk numbers
– Kick returner mentality and background on interceptions, threat with the ball in his hands
– Strong starting experience
– College background as a kick returner with a good degree of success
– Playmaker, splash plays in college career

– On the short size and lacks length and hand size (30 1/2 arms, 9 inch hands)
– Iffy tackler who lacks strength and is more of a drag down tackler who needs to lower his angle at times
– Press technique must be polished, mirror receiver on his punch, feet go dead and cause him to be beat
– Does not appear to have great long speed, reflected in his 40 time
– Struggles with balance in coverage, too easily knocked around, winds up with him being knocked to the ground too often
– Minor injury concerns

– 43 career starts
– Last two seasons: 11 INTs
– Four career INT returned for TDs
– 42 career kick returns with a 25.3 average
– Missed two full games and part of another with a leg/knee injury
– One career reception, come on a fake punt in 2012
– Swiss army knife senior year of high school, played defensive back, running back, wide receiver, and cornerback, while being a prolific return man

McCain has been mentioned on this site a few times as a player to look at.  As the draft looms near, we’re finally getting around to look at him. Memphis tape is not abundant, and I was only able to watch two cut-ups from 2014 and a little bit of a game in 2013. Always lower my confidence in my scouting report when I have fewer games to go off of but I feel I have a good read on McCain as a player.

Numbers speak for themselves. Five interceptions in 2014 and another six – in just nine games – in 2013. The latter marked tied the NCAA record in 2013 for interceptions per game with fellow potential draftee Anthony Harris.

Shows a high football IQ. In the GIF below, he’s playing to the receiver’s inside hip, reads his eyes, and gets his head around to locate and pick the pass off.

Route recognition to sit down in his lower third, passing the route from #1 off, and get his eyes on the crosser coming to him. Steps in front of it for the interception.

When I talk about his willingness to hit, I look to plays like this. Bubble screen to the receiver, flies downhill, bangs into and sheds the block, and bumps the runner out of bounds.

But he lacks the bulk or strength to confidently bring the runner down. Missed tackle in the backfield vs Ole Miss.

Has to work on his technique in press coverage, an area he arguably excels at more than off coverage, to avoid getting burned off the line. Feet don’t move on his punch and the receiver swaps hips off the line. McCain somehow falls and gives up six points.

Versatility is really going to make teams covet him on Day Three of the draft. Played all three cornerback spots and has excellent return value. Routinely produced big plays at Memphis. Those return traits are evident on his interceptions. A quarter of his picks resulted in touchdowns, a stat most players aren’t carrying with them into the draft.

His size and strength is going to cap him but as a player who will be sitting on the back end of a team’s roster, he has a lot going for him.