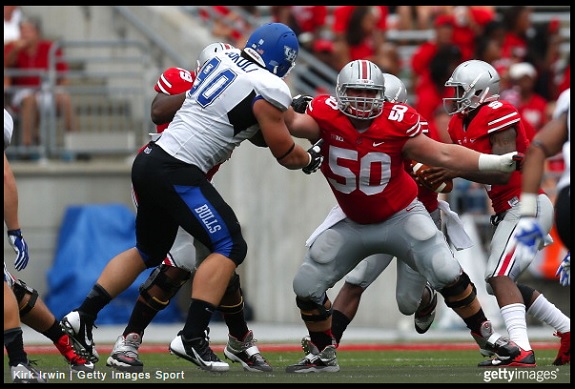 – Looks the part, long, 34 inch arms, and incredible workout numbers that put him on the map
– Gets full arm extension and creates separation between he and the lineman
– Shows solid first step, initial explosion, and capable of getting upfield and penetrating
– Awareness as a pass rusher, gets his hands up when he can’t get to the quarterback
– High-motor player
– Miscast in college, new position and scheme will turn him into a better player
– One-of-a-kind upbringing, family instilled work ethic in him

– Lacks strength, unable to anchor and a liability against the run
– Easily blown off the ball and extremely prone to getting turned, frequently unable to stay square to the LOS
– Isn’t strong enough to maintain penetration after initial explosion, easily anchored by opposing lineman
– Struggles with leverage, allows lineman under his pads too often
– Lacks impact as a pass rusher, at best average hand use, and no real moves
– Routinely stuck on his blocks against the run and as a pass rusher
– May not play to his measurable, no special movement skills aside from initial burst
– Looked terrible against top competition he faced
– Statistically unproductive career, most numbers came against inferior competition

Before we get into the tape, Sokoli’s story off the field has to be one of the most interesting of anyone in this year’s class. I’m sure Lucas Campbell will do a thorough feature piece on him so I’ll leave you with the cliff notes.

Born and raised in Albania at the fall of its communist regime, Sokoli’s story is born from the goal of living the American dream. His father, tired of working in the mines, moved to America in search of a better life. Not knowing the English language and having only a grade school education, he wound up working as a maintenance worker for $45 a day.

His mother would land on American soil two years later, leaving Sokoli and his brothers to move in with their uncle. One year later, they too migrated and the family finally reunited.

When his athletic career is over, he wants to make it on Wall Street. As the Albanian economy crumbled, his father traded other countries’ currency for clients. Sokoli is hazy on the details on the exact nature of his job but recalls helping his dad count up to as much as $20,000. Sokoli was six.

After growing up playing soccer, he found the gridiron at 13 and never looked back. His hard work earned him a scholarship at Buffalo. A dream finally realized.

As romantic as it is, the tape is still what is most important. I try not to be biased but I was rooting for this kid. Unfortunately, the tape isn’t promising.

Buffalo tape from 2014 is limited and I was only able to track down one game. However, it came against a top opponent, Baylor, and you always want to see a smaller school kid go up against a better team.

It was an ugly outing.

Just lacks the strength to anchor and hold the point of attack. Consistently washed along the interior. 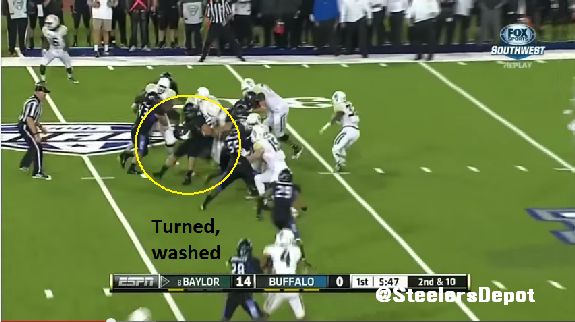 Went back against another top-ranked opponent using Khalil Mack film from 2014. Ohio State was a similar story with Sokoli routinely getting washed. Pancaked here.

No hand use, can’t stay square to the line as a pass rusher. Makes him zero threat to the offensive line.

Shows no moves and doesn’t use his hands well against the center.

Is there any talent with Sokoli? Yes. He was miscast in Buffalo, playing the nose at presumably under 300 pounds. Difficult to win. He will flash a first step and the ability to penetrate. Actually saw it on the first play against Baylor. Chips in for the tackle for loss.

A position switch is a must for him. His best home will probably come as a three tech in a one-gap scheme. Where he can work upfield instead of taking on blocks and trying to shed. That’s not his game.

His workout numbers and seemingly high character will put his name on a draft card but I’m worried those numbers don’t match the tape. And after initially thinking he could be in the mix for the Steelers, his lack of strength isn’t going to make him a fit at end. Those NFL guys are only going to get stronger.