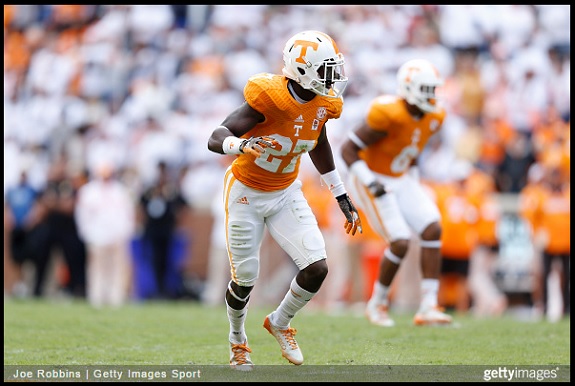 Breakdown of a late round corner. Tennessee’s Justin Coleman.

– Adequate size and length who has the ability to add some weight
– Quick feet and a strong lower body
– Lower half allows him to transition quickly, great click and close, and rallies to the ball in a hurry
– Smooth turn who doesn’t exhibit any stiffness in his hips
– Has enough long speed to play the position in the NFL
– Capable of playing the pocket with the ball in the air
– Shows ability to break down and wrap up, bring down comparably sized player
– High effort player
– Versatile who has experience playing both outside positions and the slot
– Tons of starting experience
– Played against quality competition

– Needs to add weight, currently too light
– Inconsistent tackler who must show better form, bring his arms and wrap
– Must do better job in run support, add strength to bring down bigger, denser runner
– Has trouble finding the ball vertically, staying in-phase with the receiver, and allows too much separation downfield
– Has to work on opening gate earlier, can gamble and vulnerable to getting beat, does not have great makeup speed
– Only one year of impressive production

Coleman’s best asset are his feet and explosion. Fantastic 10 yard split indicate that with some reporting him to run a 1.42, though other outlets have disputed that figure.

Though he’s flagged on the play and leads with his shoulder, you can see the explosion and change of direction in an attempt to separate player from ball.

Even better example below. Understands down and distance, 4th and 3, doesn’t pedal off the snap, and then explodes downhill as the receiver breaks on his route. Uses his length to reach in and swat the pass away.

Effort and motor is important for any player but especially one who is going to be facing an uphill battle as a Day Three selection. Wherever Coleman winds up, he’ll be fighting for a roster spot. After getting washed out of the play, he chases it down to make the tackle.

And at moments, he has shown himself to be a strong tackler who can bring runners down in the open field. Nice job of sinking his hips, breaking down, and wrapping against this screen.

However, he can’t be considered reliable and will miss his fair share. Shows up most in the run game when he’s trying to take down bigger, more muscular runners than the wide receivers he typically faced. Falls off TJ Yeldon out on the edge.

Also has trouble tracking the ball in the air. Too quickly looks back for the ball, loses it, and is no longer in-phase with the receiver. Has to learn to stay to the hip and read the receiver’s eyes. They’ll always take you to the football.

Lined up against Amari Cooper in the slot, Coleman has no clue where it’s at. Turns his head back but the ball is already clanging off the receiver’s hands. No chance to make a play on it. 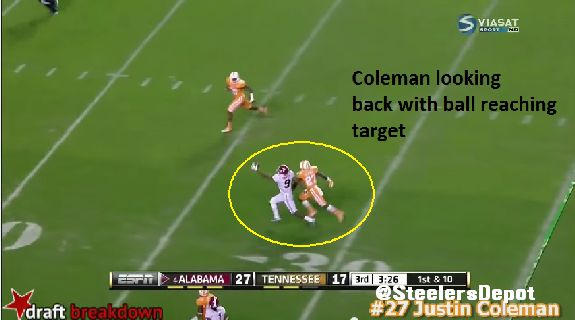 Similar situation, though maybe not as egregious, against South Carolina. Looks back to the ball, gets out of phase, and can’t contest the pass. 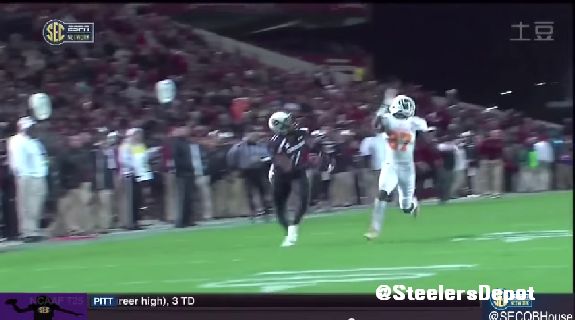 These were the issues Cortez Allen had during 2014.

Coleman is a fine late Day Three prospect with the size and quickness to play anywhere on the field. I’m not enthralled with him but there isn’t much about his game that I hate, either.