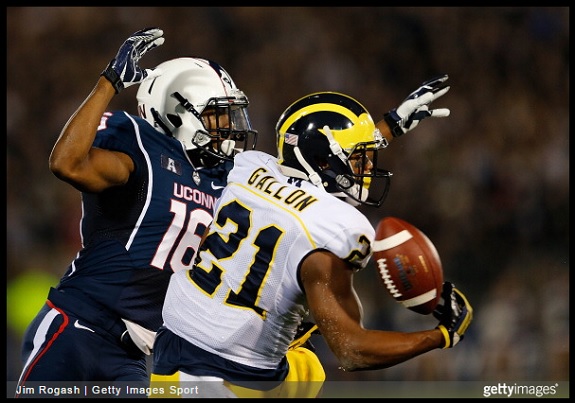 Evaluating one of the draft’s faster risers in draftnik circles. Cornerback Byron Jones.

– Couldn’t draw up a better looking player, long frame with plus length and huge hands (32 and 10 inches, respectively)
– Ridiculous measurables, tested as well as anyone this year
– Physical who plays with an edge and thrives in press coverage
– Length and hands create a good punch off the line, capable of rerouting and riding receivers
– Quick feet with fluid hips, no stiffness evident
– Low in initial stance and shows terrific knee bend
– Straight-line speed is more than enough
– High IQ and transitions out of pedal quickly, impressive click and close ability
– Strong hands who can play the pocket
– Impressive leaper capable of high-pointing the football
– Willing tackler who is always around the ball, strength to work off blocks, smart, looks to strip ballcarrier
– Special teams work, even in 2014
– Lots of starting experience at two different positions

– Medical concerns, history of shoulder injuries
– Must become more comfortable playing off coverage, isn’t used to having a cushion
– Needs to be more consistent finding the football, get his eyes to the ball or the receiver, causes him to be too grabby and penalty-prone
– Will have to lower tackling angle, approaches to high and makes him prone to slipping off
– Won’t always use his hands as well as he should to shed stalk blocks, occasionally stuck
– Did not face elite competition

– Four year starter, 37 career starts, team captain senior year
– Two-year safety with 20 starts before converting to corner, starting final 17
– 2014: 26 tackles 4 deflections 2 INTs
– Career: 18 deflections 8 INTs
– Jammer and on field goal block team in 2014
– Jumped 44.5 inches in vertical at Combine, 12’3” in broad, ran 4.36 at Pro Day
– 2014 season cut short due to season-ending surgery on left shoulder, injured in first game of the year, kept him out of Senior Bowl, too
– Was medically cleared at Combine and did not have to come back for rechecks
– Double-major in economics and political science, internship in Hartford and Washington D.C.
– Father is a state police officer and brothers with military experience
– Successful receiver in high school, scholarship offer from Boston College to play there
–  Basketball star, averaged a double-double his senior year (16.1/10.8)
– Broke 30 year old record high school league record in the 400m
– Ridiculous athlete, multiple stories about his rare skillset

In draftnik circles, Jones was a virtual unknown prior to the Combine. But he was invited for a reason and you can put money the “real” scouts knew the type of player he was. He is the real deal.

Love his pre-snap stance. For a tall corner, Jones shows the ability to get low and has terrific knee bend. Great technique and flexibility to sit in his hips like this. 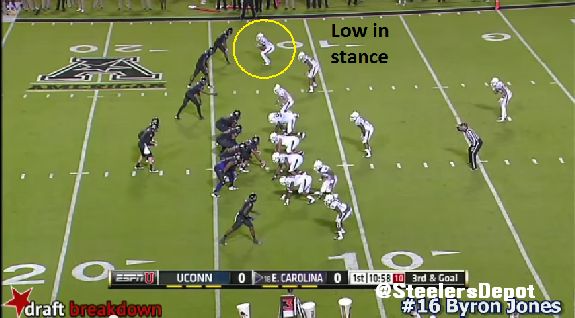 Loves to press. Length and hands are major assets. At the top of the screen, he jams the receiver, mirrors him and stays in his hip, finishing the play off leaping for the ball and picking it off.

Now he’s in off coverage, playing bail technique, opening up his hips, reading the eyes, and knocking the pass down.

Jump back to 2013 against quality competition versus Michigan. Jones separates himself from someone like Kevin Johnson because of his strength. Works through this stalk block, gets his hands on the back, fights off the receiver working back to the block, and spins the runner out of bounds. That’s something Johnson can’t do.

Speed to run downfield, stays in-phase with his eyes to the football, leaps, and picks the pass off.

Is too aggressive at points and will have to become more comfortable in off coverage. There were moments where he needed to find the football instead of riding the receiver. Prone to getting called for pass interference because of his in-your-face nature.

In general, there are some minor technique things he could clean up. Lower his angle, use his hands better to come off blocks, and focus a little less on stripping the ball when he’s the first man there.

Competition isn’t great but we’re not talking about a Division Two kid, either. There’s enough good tape out there to make an accurate judgement of his skills.

My main concern, as it is with most draftniks, is the state of his shoulder. Ended his season, had to have surgery to repair it, and consequently missed the Senior Bowl. The initial injury appeared to happen in the Huskies’ first game against BYU. Landed on it awkwardly making a tackle in the fourth quarter. Dogged him the rest of the season. That’s natural and happens to a lot of players.

Encouragingly, he was not asked to come back to Indianapolis for the Combine rechecks. A positive sign teams are comfortable with how his shoulder healed. Don’t liken Jones to Gerod Holliman, who has legitimate long-term shoulder concerns.

Jones is arguably the best athlete in this year’s class. Numerous anecdotes about how good he is. From riding a bike without training wheels when he was only three, to blocking two volleyball spikes in a single jump, or jumping over his high school football entrance banner, those who know him probably didn’t bat an eye at the ridiculous numbers who turned in at Indy.

Equally high marks off the field. Comes from a good family. Dad is a police officer. Two of Jones’ brothers are in the military – one in the Navy and another in the Marines – while a third brother is an electrical engineer.

Jones has gotten two internships on the political spectrum working first in Hartford and then Washington D.C. with the former giving him experience on the House floor. House majority leader Joe Aresimowicz was quick to praise Jones during his time there.

“He was sitting in a meeting the second day on the job, which is not the norm. The following week he sat in on a screening meeting about what bills would be taken to the floor for voting,” he said.

Across the board, it’s hard to find a player more impressive than Jones. I have a pretty good feel for this cornerback class and would rank Jones my number two corner, ahead of Trae Waynes and just behind Marcus Peters.

Obviously no qualms with taking him at 22. If he’s even there.