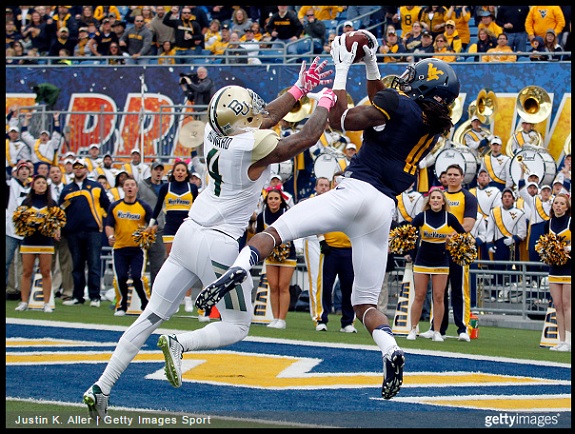 The third report on the “Big Three” at receiver in this year’s class. West Virginia’s Kevin White.

– NFL size and length (32 5/8 inch arms)
– Soft, natural hands catcher who works to extend hands away from his body on difficult and easy targets
– Strong leaper who finds football at its highest point, special ability to win on contested throws
– Tracks the ball well and shows innate ability to adjust to passes mid-flight
– Legitimate deep speed, excellent test times, and forces defensive backs to open gate to protect getting beat
– Quick to the tuck post-catch, gets upfield in a hurry
– Explosive at the top of his route, quick feet and lower body explosion, gains separation
– Length and strength capable to be an asset as a run blocker
– Experience in the slot and on the boundary
– Outstanding senior season, one of the top producers in the country
– Regarded as a person who has grown and matured over time

– Will round off his cuts, would like to see him precise and detail-oriented at the top of his route, got away with it due to speed and explosiveness
– Has to fight back to the football harder on scramble drills, too passive
– Did not appear to run the most advanced tree, lot of vertical routes
– Not the biggest threat after the catch, explosive initially but won’t make many miss in the open field
– Lacked consistent effort as a blocker in the run game
– Relatively small hands (9 1/4 inches)
– Played to just one side of the field
– Only one season of serious production
– Two years of experience at the Division One level

On tape, White’s combination of hands, body control, and straight line speed make him a unique threat. Live DeVante Parker, he’s a natural hands-catcher who gets extension away from his body. Throw in his ability to get vertical, and he’s a nightmare for defensive backs in jump ball situations.

A still photo to capture White at his highest point, leaping over the defensive back and finding the football. 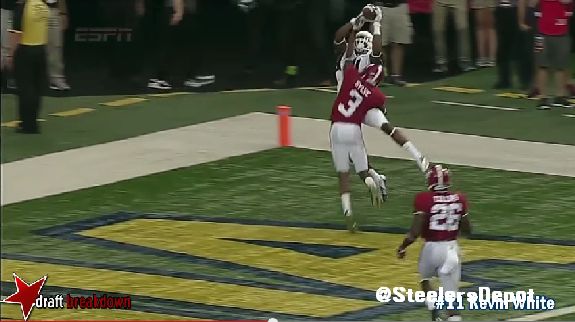 Just his typical day at the office for White against one of college football’s best defenses. Nine catches, 143 yards, and that touchdown.

One-handed grab on this fade against Baylor. 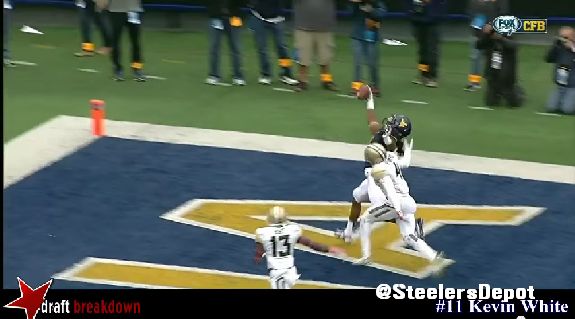 Body control while falling to the ground to adjust, pluck, and make the grab. Special ability to win in the air.

He’s also a vertical threat. Quick feet to swap hips and beat press coverage off the line. Stems his route to the outside, baiting the corner, then bursts back inside to separate and run the nine route downfield. Scores with ease.

When he tries, his length and strength allow him to be an effective stalk blocker in the run game. At the bottom of the screen, he sticks to the corner, allowing the runner to score.

His flaws are relatively minor. Two areas that fall into effort/awareness. Down by multiple scores late against Oklahoma, you can easily tell White has given up on his block, showing no desire to give the same effort to the corner we saw up top.

Fails to work back to the football on this curl. Corner jumps it and rewards himself nicely with an interception. Going to have to fight for it, be more aggressive, in those situations.

Maybe I didn’t see the right, or enough, games but his route tree was limited. Used speed to win vertical and didn’t see him run many complex routes. Win with speed either vertically or by running corners off and breaking down underneath. Air Raid principles of two way, vertical/curl routes depending on if you can beat the corner.

White could have never envisioned the point he’s at in his life four years ago. Spending year two of three at Lackawanna College, he was off the radar of college teams. And heck, he wasn’t even on a football field. The growing pains of a knuckleheaded young adult, financial aid forms that were turned in too late made White ineligible.

He refocused, preserved, had a successful 2012 campaign, and received an offer from West Virginia. Today, White stands as the potential first receiver off the board.

Amari Cooper is a better receiver now because he’s a more polished route runner but White has the greater upside and is the more natural catcher. Vaults him over the Alabama alum in my rankings.

Games Watched: vs Alabama, vs Oklahoma, vs Baylor