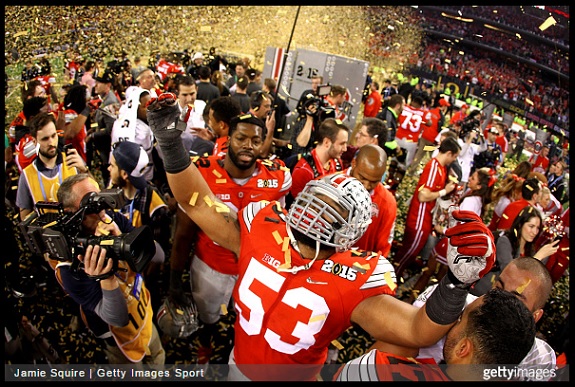 – Thick body with broad shoulders, excellent length and hand size, especially given height (33 5/8 arms, 10 1/4 hands)
– Strong upper and lower body capable of holding the point of attack against base blocks
– Plays low with proper leverage and low center of gravity, tough to move
– Hard worker as a pass rusher who showcases an effective swim, built-in height advantage allows him to dip the edge
– Impactful tackler with a violent finish, brings runners to the ground when he gets his hands on them
– Strong hands with a forceful punch
– Exhibits awareness as a pass rusher, gets his hands up if he can’t get to the QB
– Versatile and can play up and down the line, scheme versatile but experience in a 3-4
– Productive career

– Only a decent athlete who predictably struggles with his change of direction, causes him to be unable to finish some plays
– Has to be more consistent at staying square to the LOS, occasionally turned and washed
– Must get better at anchoring versus double-teams
– Isn’t a natural pass rusher, can get stuck and will disappear
– Gets overextended off the snap, too far in front of himself and too often on the ground
– Flatback as a pass rusher caused by the overextension
– Questions about work ethic and motivation

Bennett is a squatty, versatile lineman with a ton of core strength. Showed well against Alabama and Wisconsin, two of the biggest and most powerful offensive lines you’ll find in college football. Look good against those two units and you know that strength is legit.

Right defensive tackle below. Though he gets turned, holding the point against a Crimson Tide double team is awfully impressive. Didn’t see it often but it shows the core strength he has.

Similar event against Wisconsin. Forces the run to the outside for no gain. The Buckeyes would go on to hold Melvin Gordon to just 76 yards rushing.

Not a natural pass rusher but 14.5 sacks over the last two years is impressive. Will show active hands with his swim being his go to. Violent finisher, as you’ll see below, immediately knocking the ball out on impact, and creating the fumble.

Another violent finish against Michigan State. Throws Connor Cook to the ground.

Technically, needs work firing off the ball. Lower half doesn’t get under him and leads to him overextending. Creates flatback, puts his head down as a pass rusher, and makes him susceptible to finding himself on the ground. 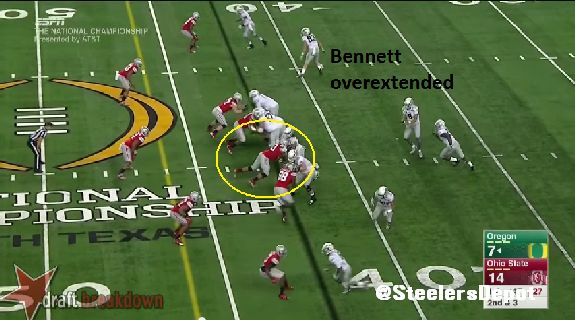 And again here as the RDT.

Flatback as a pass rusher and his bull rush is easily rebuffed by the Ducks’ RG. That overextension saps him of his power. Has to be getting his feet under him off the ball.

Explodes through the line but is kicked out and knocked to the ground by the pulling guard. Wasn’t able to anchor. Not even a little.

Learning about his background, Bennett had motivation and work ethic concerns his first two years at Ohio State. He expected to play for Jim Tressel and was discouraged after the head coach was jettisoned. Didn’t react well to it, and there have been times over the years were his coaches – including Urban Meyer – have gotten on him for not playing to his potential. To be fair, Meyer praised him for his 2014 campaign. But it’s a concern. Would Bennett react the same way after playing for John Mitchell, who could retire in the next season or two?

Early in the draft process, Bennett was regarded as a top defensive prospect. His stock has cooled considerably since then but there’s still a great prospect to be had. He may not have the height but has the length and strength coupled with school and personal awards, like being a captain, which will make the Steelers interested should he fall to them in round two. I don’t see those odds as being very good, however.

Games Watched: at Michigan State, vs Wisconsin, vs Alabama (Playoff), vs Oregon (Playoff)