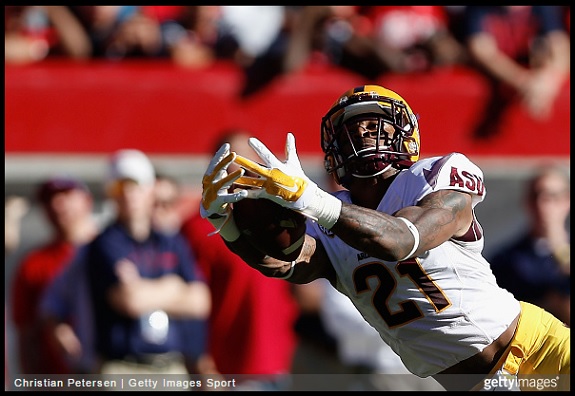 -Excellent size, lengthy guy with a ‘true height’ of 12.24ft
-Strong, reliable hands
-Crisp route runner, runs sharp routes with great vision to get open
-Physical receiver, uses his big body to his advantage
-Catches well in traffic
-Excels in catching back shoulder throws and using sideline to his advantage
-Uses his speed (4.44 40-yd dash) and long strides to separate from defenders
-Was the #1 receiver at ASU, but was used outside and in the slot
-Red zone threat
-When he does engage defenders to run block and his effort is at 100%, he is effective
-Tracks the ball well in the air

-Not extremely fast, long strider
-Some focus drops
-Needs to sharpen up certain routes, he rounds out post and slant routes
-Really needs a lot of work on his run blocking technique and staying engaged – effort also not 100% consistently
-Doesn’t break many tackles after the catch
-Lets defenders get to him, needs to stay mentally calm
-Broken wrist injury, but played with it and did not need to do a medical re-check

Strong is a lengthy guy who uses his big body to his advantage. He is a true red zone threat and his true height of 12.24ft could confirm that. Not too many drops from Strong but most of his drop are due to a lack of focus or his eagerness to turn up field too quickly. Strong is not very fast but his long strides combined with a 4.44 40-yard dash speed gets him up field quickly. His route running is above average but he tends to round out his post and slant routes, allowing defenders to read and jump them easier. Strong’s biggest flaw is his blocking. His effort really isn’t apparent and his technique is very poor. Strong makes miraculous grabs and is decent after the catch. It takes him about 7 yards to get into another gear but once he separates he is hard to catch.
Strong gets knocked for his route running, but his double move is ridiculous. Here, he fools the USC defender and creates separation. He doesn’t make the catch due to a poor throw, but you can see the great route and separation. Ben Roethlisberger would make that throw ten times out of ten, and Strong would take it to the house.

Strong can be categorized as raw, but his ceiling is extremely high. He has a minor drop issue that a veteran receiver and receiver coach will easily fix. His drops are due to a lack of focus and high eagerness to turn up field too quickly. A simple crossing route on 3rd and 4 and he needs to make that catch to contend for the first down.

I’m sure this GIF will get Steelers fans excited. It’s a hail mary and a last shot at a W. Strong tracks the ball and makes a great catch in front of a USC defender waiting for an easy interception. Strong makes the game winning catch.

Strong is at the top of the screen. He gets to the defender quickly, but fails to engage and stay engaged. The defender is easily able to get off Strong’s attempt at a block and assists in the tackle. Really not what you want to see out of a receiver, especially one of his size. He should be dominant.

An easy route but Strong’s long strides combined with his 4.44 speed, he is able to separate from the defender and make an excellent catch. This is a walk in the park for Strong, could expect to see these types of catches in the near future.

It’s 3rd and 10 and he lets this ball go right through his hands. He puts himself in a great position to make this play and he can’t. This is the rawness that might cause him to slide. Have to make that catch, especially on 3rd down and down by nine.

This is the exact catch and throw from the GIF above, in a different game and situation. Notice how he uses his big, long body to elevate above the defender and make a great catch. He shows off his strong hands and concentration. These catches need to be consistent.

Strong high pointing the ball in the GIF above. I highlighted Strong and the ball because of clarity issues. 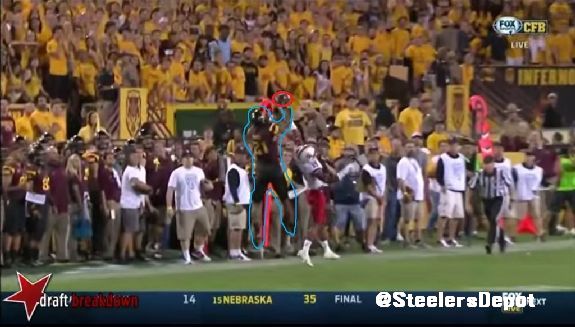 Strong has every bit of talent to be considered a first rounder. He has all the tools to be a number one receiver in the NFL, or a great compliment number two. A true red zone threat, I can see Strong being utilized more in that area and on more 3rd and longer situations.

Only 21, Strong still has a lot of room to grow into his frame and is raw in some areas.  His blocking technique needs a lot of work, along with his effort. I believe that a veteran receiver who takes him under his wing could help with the effort aspect, as for the technique, Richard Mann could really improve on his run blocking. Strong is a big kid and should be dominant in that aspect of the game.
If you ask me, Strong’s route running is not as bad as other’s claiming it to be. He has clean, crisp routes except for is post and slant routes, which he tends to round out.

Strong has the speed and route running ability to help him separate from defenders. I’ve seen it time and time again on tape; he loves to make big plays and attacks the ball in the air. Once Strong gets a few seasons under his belt, he will break out and shake off the rawness to become a complete player.

The Steelers have brought Strong to Pittsburgh for a pre-draft visit to learn more about him. They probably asked about his wrist that may need surgery and about his time pre-Arizona State. Strong could really bring an already excellent offense to a new level.  Did the Steelers bring him in because they’re interested at pick 22 or do they think he has a chance to slide? Only time will tell.