– Borderline elite first step, tremendous, explosive get off
– Natural bender who uses height to his advantage, hip/ankle flexibility to flatten the edge and get upfield
– Quick, active hands who fights hard as a pass rusher, stays disengaged and clean
– Well-rounded repertoire who shows counters, worked on his game despite not having to due to innate talent
– Dominated competition he faced, statistically elite production and every accolade in the book
– Timed exceptionally in pre-draft workouts
– Durable, never missed a game
– Regarded as a player with a tremendous work ethic
– Superb starting experience, four year starter

– Undersized with short, 31 1/4 arms, and a frame that is probably maxed out
– Lacks muscle and doesn’t look the part
– Deficient upper body strength, not many opportunities on tape, but question ability to hold the point of attack and set the edge
– Plays with poor technique when taking on block, consistently attacks lineman with the wrong arm
– Played only one position, left end, simple scheme that just asked him to get upfield, and doesn’t have any experience dropping into coverage
– Didn’t face quality competition, FCS kid who went up against right tackles
– Rehabbing injury, medical concerns that will stall the beginning of his career

Tull has been getting lots of love in the Pittsburgh area over the last week. The Steelers’ brought him in for a visit and on this site, Lucas Campbell did a fantastic write-up on his backstory, and Chris Nicolaou had his interview with him go up this morning.

The FCS’ version of Vic Beasley, no one can question Tull’s pass rushing chops. Explosive first step that tackles had trouble keeping up with. Fires off the ball and shows bend to turn the corner, forcing the quarterback to climb the pocket.

Snapshot of his bend. That’s a skillset that will translate regardless of where he played. 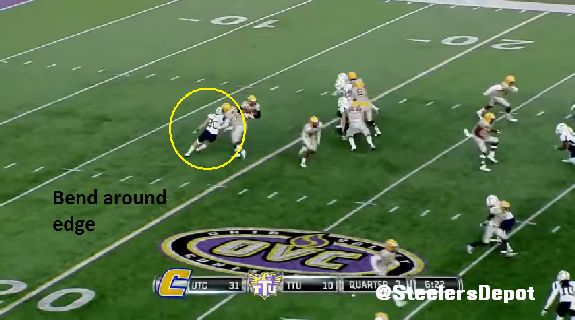 Well-rounded pass rusher. Relatively rare for the position and especially for a kid with the get off who could have won with just speed. Didn’t need to develop moves but decided to anyway and is better off because of it.

Again at left end, quick hands to swim inside and beat the tackle.

And again, with a spin move that would make Dwight Freeney swoon.

But like Beasley, I don’t know how Tull is going to hold up against the run. He’s short, weak, and doesn’t possess a frame that will allow him to grow much more.

Hard to find tape of him being asked to set the edge or hold blocks against the run. Tennessee Tech, for example, ran a ton of veer, leaving Tull as the unblocked defender. Didn’t have to worry about a blocker.

Has trouble taking on blocks and plays with poor technique. Too often, Tull failed to take on blocks from pulling guards well, failing to leave his outside arm free to spill runs back inside. 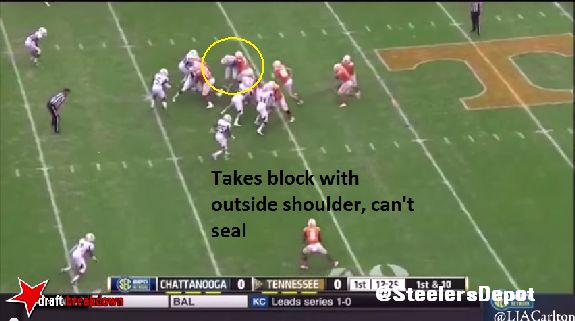 Opposite issue here and though perhaps slightly more forgiving, Tull is forced to spin and waste time to find the runner instead of keeping his inside arm free to work off the block and close the hole. 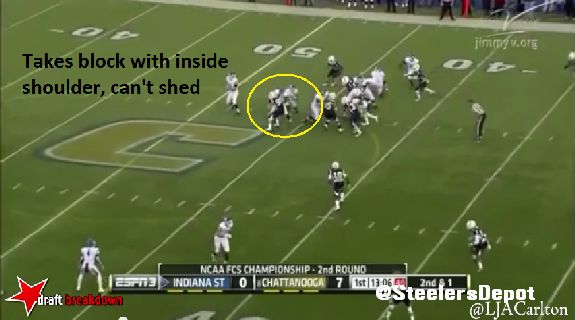 Although the Tennessee tape may look tantalizing, Tull having great success against a D-I school, it’s misleading. The Volunteers’ right tackle was a freshman and didn’t show FBS talent. Tull still had a productive game but there isn’t any tape against quality tackles. And he had the luxury of facing right tackles at the FCS level. Quality isn’t comparable to what he’ll face in the NFL and it’s a projection each team evaluating him will be forced to make.

Can he get stronger against the run? How will he fare against even average right tackles? How quickly will he convert to playing with his hand up, something he’s never done before? No matter how big of a fan you are of Tull, those are three questions you can’t answer with confidence.

He underwent surgery last month to repair a torn labrum in his right shoulder. That will cause him to miss time and slow his development. OTAs is a critical step and if he misses that, he’ll fall even farther behind. I don’t think you’re going to get anything out of a FCS kid playing a new position coming off a major surgery in year one. Stunts him growth. When will he have the chance to make an impact?

However, he’s a great athlete, his numbers back that up – 42.5 inch vertical and running in the 4.5’s at his Pro Day – that show it wasn’t all because of the competition. His hand use and repertoire are advanced for where he’s at during this stage in his career.

If you’re willing to be patient with him, a virtue that is difficult to come by in 2015, he’s worth grabbing later in Day Three. But his list of negatives are tough to ignore and make him nothing more than a flier.