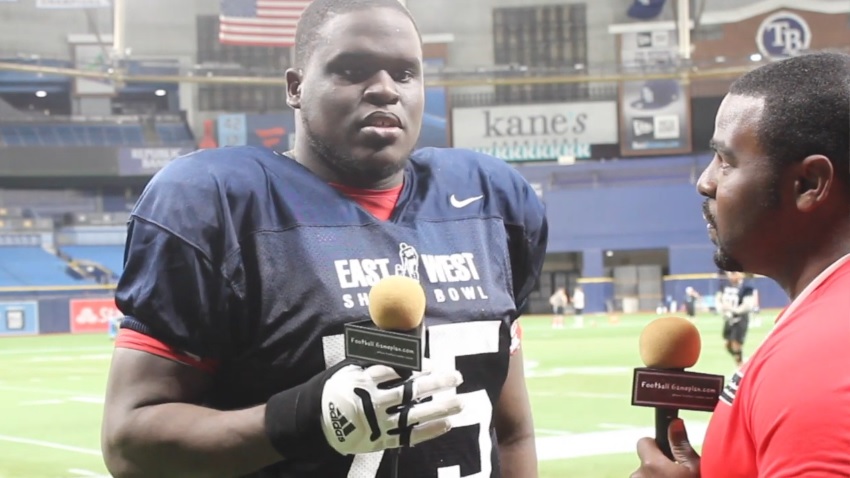 – Thick body with large lower half and good length for frame (33 inch arms)
– Mauling, punishing run blocker, borderline elite, tons of functional strength
– Ability to pancake defenders, washes them out of gaps and generates a ton of movement on his first level blocks
– Great leg drive and finish, understands leverage and angles, shows strain and finishes blocks to the whistle
– Good hand fighter with a powerful punch in pass protection, exhibits excellent grip strength who locks on when he keeps his hands inside
– Finds work in pass protection when uncovered and isn’t passive in pass pro
– Big frame makes it hard to get around him in pass protection
– Elite starting experience with solid production and career accolades
– Good NFL bloodlines

– Not a great athlete who gets exposed in space, will miss target in second level in the run game
– Aggressive pass set, desire to be physical works both ways, tends to lunge and can double over at the waist, needs to maintain his base with more consistency
– Will struggle laterally and get beat by counters and inside rushes
– Not a super effective cut blocker
– Seemingly position limited and played only one spot

We’re paying extra close attention to Dotson because of the Steelers’ interest in him, conducting a private visit with one of the Combine’s biggest snubs. And there’s good reason to check him out. Pittsburgh likes their guards (think DeCastro, Foster, Kemoeatu, just to name a few) big as opposed to, a classic zone scheme with undersized linemen. And Dotson fits the bill with a thick lower half and solid length for his frame.

Where he really excels in his run blocking. If you’re drafting Dotson, it’s for what he can do in the run game. He may be one of the classes’ strongest, most punishing interior linemen who understands leverage, angles, and can flat out move his man from Point A to Point B. Take a look. He’s the RG in these clips.

First look at Dotson. Definitely a mauler in the run game. Knows how to move DL against their will. Played in a Wing T offense in HS. Became school's first All-American because of plays like these. https://t.co/GigzTdzKZw pic.twitter.com/ne9hnjq5RQ

That’s basically the dude you’re getting. He’s physical in pass pro, finding work and helping out when he’s uncovered, and just gets after it in the run game. It takes a lot – and I mean a lot – for a Rajun Cajun to get named First-Team All-American as he did. Not exactly playing in the primetime slot every week.

His issues are overall athleticism and base. He does tend to miss open field targets as opposed to working in a booth at the first level on down blocks or duo double-teams.

And in pass pro, when he wants to be aggressive with his punch, he’s prone to whiffing and doubling over.

Though I should point out Dotson shows excellent grip strength, hand placement, and punch when he does make contact with a solid base.

The non-Combine invite and smaller D-1 school makes it all the more difficult figuring out where he’s going to go. We’ll have to see how he tests at his Pro Day to gauge his athleticism since it’s a question on tape. But I can see this guy fitting the Steelers’ style. Throwback, nasty, and with Art Rooney’s decree of making the run game more effective (Dotson wouldn’t start out of the gate, I know), adding a guy like him will be a step in accomplishing that mission.

On the low end, I’d compare him to Jamon Brown. On the high end, an Andrus Peat/Larry Warford type.