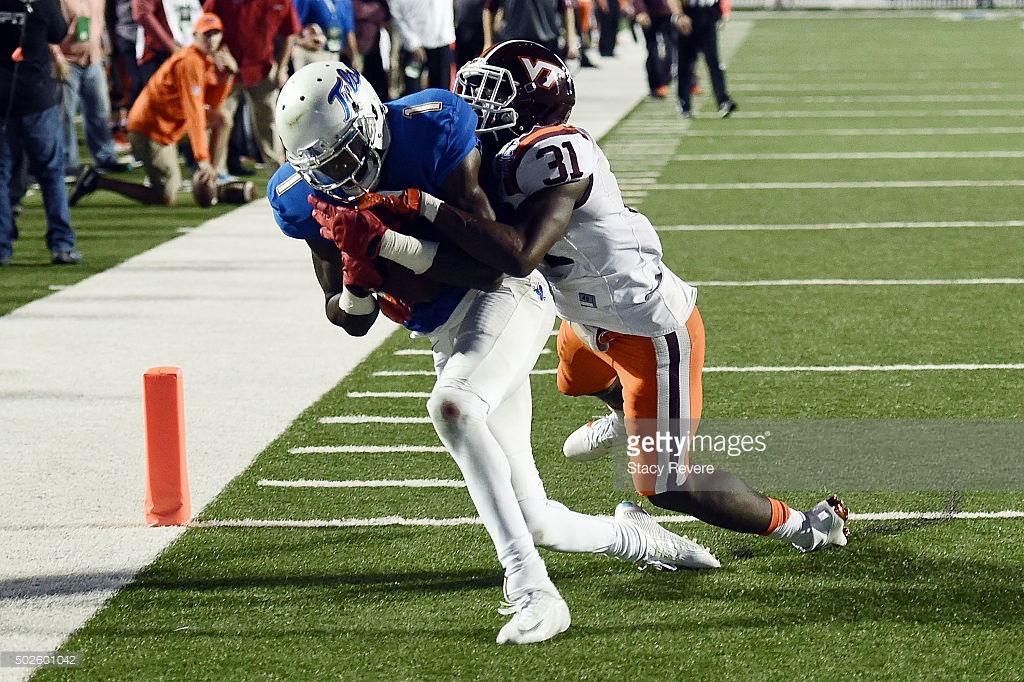 -Quick, efficient release off the line against press coverage
-Great hands to snatch ball out of the air
-Good upper body flexibility allowing him to adjust to balls in flight
-Gets head around quickly to find the football
-Good possession receiver that has awareness of where sticks are
-Legitimate deep threat that can pull away from defenders with long strides

It’s hard to argue with the numbers that Tulsa senior receiver Keyarris Garrett put up during his final campaign as a member of the Golden Hurricane football team (96 catches, 1,588 receiving yards, eight touchdowns.)

Those are eye-popping stats for a receiver of his size and speed in this draft class, but they can be deceiving.

A big reason behind the explosion in numbers for Garrett during his senior season was due to the fact that he was the No. 1 target on a high-octane passing attack at Tulsa. But the fact that he continued to put up monster numbers week after week speaks volumes about his work ethic and ability as a receiver.

His route-running precision should improve greatly at the next level with a heightened level of attention to detail, but for now this is what we have to go off of.

While he does round off his routes more often than not, Garrett has a unique knack for making the difficult, off-target throws look like easy catches.

The upper body flexibility and the outstanding catch radius — thanks to his 34 1/2 inch arms — are on full display here as he’s able to reach behind him with both hands to corral the off-target throw for the first down.

In the clip above you can see how Garrett rounds off his route when breaking towards the middle of the field. While it doesn’t hurt him in this instance, a more experienced corner will break on that at the next level to make a play on the ball.

When Garrett does run a technically sound route, he has the ability to turn the defensive back around, creating ample separation and a clean throwing window for his quarterback.

I love the way Garrett sells the vertical route off the line before planting his outside foot hard at the top of his stem, using a solid head fake to burst inside, turning the corner around in the process.

Although the throw is off-target again, Garrett was able to cover up a lot of bad throws from his QB at Tulsa this past year.

The catch radius and strong hands — despite the small size of said hands — is really impressive.

Standing 6-feet-3 with his long, lanky frame, Garrett is a prime target for physical corners that utilize press coverage. However, Garrett is so good at attacking the press off the line and has a plan for every corner that the man opposite him rarely has a chance to get a hand on him.

In the first clip, Garrett uses a great jab with his inside hand to create separation against Oklahoma’s Zach Sanchez before following through with the swim from his outside hand to clear the attempted press, giving him a free release to the middle of the field on the slant route.

That’s pretty impressive for a guy who faces press coverage a lot.

In the second clip, Garrett uses a fast release at the snap and quick feet to beat the New Mexico corner inside for another clean inside release, allowing him to create plenty of separation in the middle of the field, providing his quarterback with a large throwing window.

While no one will mistake the New Mexico corner for an NFL one, Sanchez is a corner who will certainly hear his name called in the middle rounds of the NFL Draft this April.

Outside of his impressive work against press coverage, Garrett is above-average at getting his head around quickly to find the football, making him a tremendous fit as a possession receiver at the next level.

Once again, Garrett beats Sanchez off the line, allowing him to push vertically. Fortunately for Garrett, his quarterback puts it where only he can catch it — back shoulder.

Garrett gets his head around so quickly that he’s able to shoot his hands up to make the catch along the sideline for a big first down against the Sooners.

On top of getting his head around quickly to find the ball, Garrett has a great feel for where the sticks are at all times on the field. That alone makes him a good projection for a possession receiver in the NFL despite his large frame and speed.

As a receiver, Garrett is not a threat at all after the catch. He often goes down on first contact, but rarely fumbles the football. He’s a chain mover that seemingly always finds himself open in the short-to-intermediate area of the field, and he has a knack for making the routine catches to keep the offense on the field.

When not serving as a possession receiver, Garrett is a large threat on deep balls. While at Tulsa, Garrett never really had great quarterback play, especially on deep balls, so this area of his game should improve at the next level with a quarterback in his camp that can consistently hit him when he’s got a step or two on his defender deep.

What I really like about Garrett as a threat down the field is that he doesn’t need a double-move or some form of broken coverage to make the big play.

Garrett can simply run by you with his long strides and 4.53 speed.

In the first clip, Garrett doesn’t create a ton of space against Sanchez, but he’s able to run by him off the line, allowing his quarterback to drop the pass into the tight window of Sanchez’s head.

Garrett will get squeezed toward the sideline quite a bit by defenders, but he has a great feel for where he is on the field and has great body control to make the toe-tap catches along the sideline.

Then, when he’s able to stick towards the hash marks he ends up doing things like this to secondary’s.

Right at the snap, Garrett has his man beat. The long strides and efficient release off the line allows him to blow right by the Memphis corner.

The 4.53 40-time might not impress you on paper, but Garrett’s long strides allow him to cover a ton of ground quickly, forcing defenders to put in double the work just to try and keep up with Garrett.

He might not blow by most corners in the NFL, but with his size and stride length, he’s going to be a matchup problem when he gets on the field.