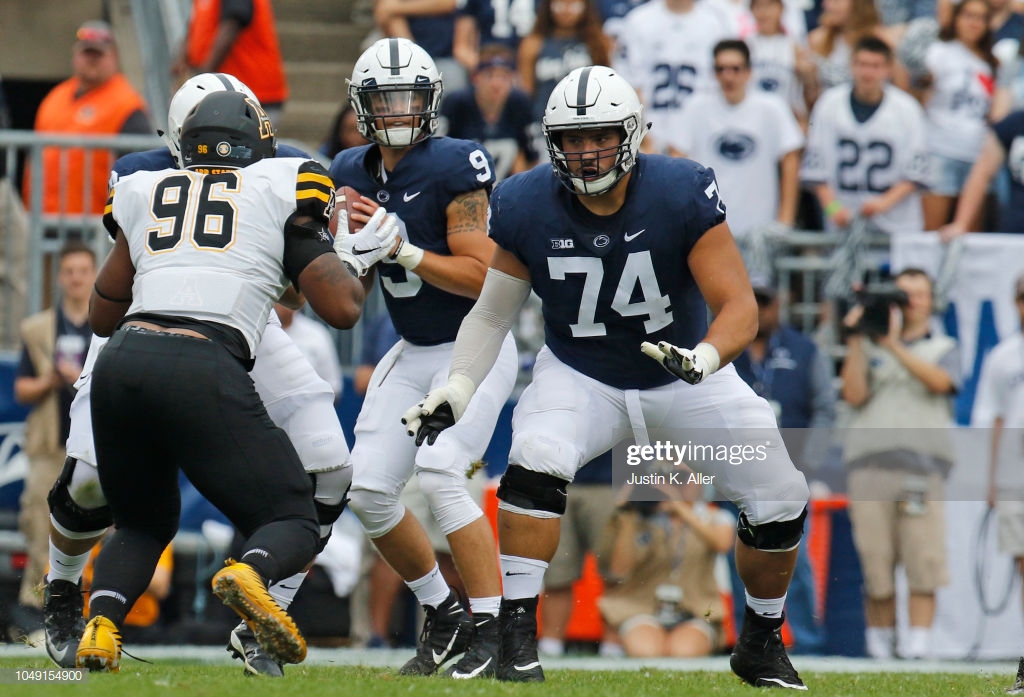 Penn State senior offensive lineman Steven Gonzalez is a maddening evaluation. Gonzalez is a mammoth guard prospect with 42 career starts under his belt and a quality set of skills. The New Jersey native has transformed his body over his college career from an overweight offensive lineman into a trim 6-4, 340 pound guard prospect with decent foot speed. Gonzalez, a fifth-year senior, is surprisingly flexible for his size with a low stance and pad level.

He has good feet and does an excellent job of keeping his balance to and through contact. He arrives at his target ready to engage and typically does a good job of executing his assignment. While he was rarely asked to play in space, Gonzalez does a good job of climbing off his double team assignment to the second level and walling of linebackers. He can pull, down-block and is technically proficient at a variety of different schemes.

Where he shines is as a pass blocker. Gonzalez is a wall of a human with a patient kick slide and a huge anchor. The Nittany Lion has turned himself into a player that doesn’t get beat very often.

Whether it’s looking for an assignment, helping the center, or handling a bull rush, Gonzalez handles most of them very well.

The problems with Gonzalez are not with what is there, but what is missing.

For a 340 pound offensive linemen, he should move players off the ball with more authority and strike with more power behind his hands. Yet Gonzalez is more of a turn and hold sort of player, who does not create space in the running game on a regular basis.

The real hole in his game however is a lack of explosive movement skills, which adds to his lack of power. Gonzalez is big, moves athletically in most directions and can execute most blocks. He just does it at a slow, methodical pace. He doesn’t generate many overtly positive plays despite being a well-schooled player. His lack of quickness is apparent in situations that he faces a quicker, more athletic defensive tackle.

There is something to be said for simply not getting beat and as a pass blocker, Penn State’s Steven Gonzalez may be appealing to a team that is looking for a big-bodied project player who won’t get your quarterback killed if he’s asked to fill in. He does a very good job of maintaining pocket depth and integrity and can handle all but the quickest three-techniques. It’s hard to completely write of Steven Gonzalez as a prospect because he’s maximized his abilities to this point and is a good football player. However it’s hard to prioritize a player on draft day whose calling card is ‘not getting beat’. He may have a long and successful NFL career in some form or fashion but it likely won’t start as a high-value draft pick.