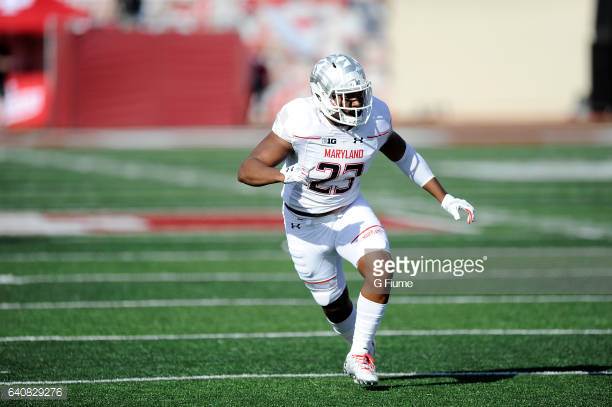 – Leader, communicator, commanded the Terps defense and not having him out there was noticeable
– High football IQ, quick processor in his run/pass keys and in diagnosing route combinations
– Shows hand use to stay clean in the run game and not let blockers get engaged
– High effort/motor player who chases the ball sideline to sideline and downfield, closes with violence
– Reliable tackler in open field, strong enough to bring backs down one-on-one
– Capable of carrying tight ends in coverage, though ideally when he has leverage/help to funnel or contain receiver
– Used as an every down, all-situations player
– Some versatility, walked out with running backs and saw a couple snaps on the edge
– Excellent starting experience with good production
– Well-liked and regarded in the locker room

– Physically, doesn’t stand out with strength or athleticism
– Has difficulty working off blocks when OG/C engage, gets too tall and needs to do better job staying square to the football
– Better as a zone dropper/matchup defender than pure man, best when he has help/leverage than covering player solo
– Needs to be smarter and less aggressive on the sideline, avoid late penalties
– Lacks the speed to stop perimeter runs
– Below average frame in height/weight
– Upside may be limited
– Not going to make much of an impact on the edge, marginal pass rusher whose impact will only be created by scheme

Carter Jr. is someone I absolutely see the Steelers selecting with one of their seventh round picks. He falls neatly into their “hearts and smarts” mantra they’ve repeated over the last couple of draft classes. Carter may never be an elite prospect but he’s going to make the bottom of the roster more competitive and you know you’re going to get an intelligent, hard-working player to round out your draft class.

His top trait is above the neck. He was the leader, the communicator of the defense and without him on the feel, those things suffered, similar to losing Ryan Shazier in Pittsburgh. Here’s the best example I can give to you.

Top-down view, watch Carter read the route combination. Lets the deep crossing route go to the safety, doesn’t bite on it, and he drifts to #2 down the seam. Forces the throw to the outside shoulder when it’s supposed to be inside, the receiver can’t get his head around and track it, and the pass is incomplete. Well-covered, well-communicated. Play unfolds down the left seam.

Watch what happens later in the game without Carter on the field. Same route combination. Two players bite on the crosser, leaving the seam open, and it would’ve been a walk-in six had the receiver now blown a tire at the end. Same play, watch the left seam.

Sorta feels like watching the Steelers defense, doesn’t it?

But Carter isn’t a perfect prospect. He’s not very strong versus the run and gets swallowed up when he can’t defeat the block immediately. And a lack of speed can make it tough for him to get to the edge.

I get this is Barkley but the first defender had already slowed him up and Carter still can’t get there and flails at the tackle. That doesn’t get easier in the NFL.

Or taking on a the block from the center working to the second level on this inside zone. He’s trying to fill his gap, I’m not holding that against him, but you can see how easily he’s blown out of that gap on his run fit, even though he’s trying to throw his shoulder in and take it on. Bounced back and he’s unable to recover to change direction and get his hands on the back.

The starting experience, the captaincy is attractive to Pittsburgh. Captain in high school and as a junior and senior at Maryland. Not everyone can say that especially late Day Three guys.

Carter is a little Jon Bostic-like. The Steelers don’t have to double-dip at ILB, drafting one gives them five for the 53 (Bostic, VW, Matakevich, Fort, high draft pick) but Carter wouldn’t be a bad selection one bit for the consistency and intelligence he’ll bring in that room. Confident he’ll do all he can to maximize his talent.

Games Watched: at Wisconsin, vs Penn State, vs UCF