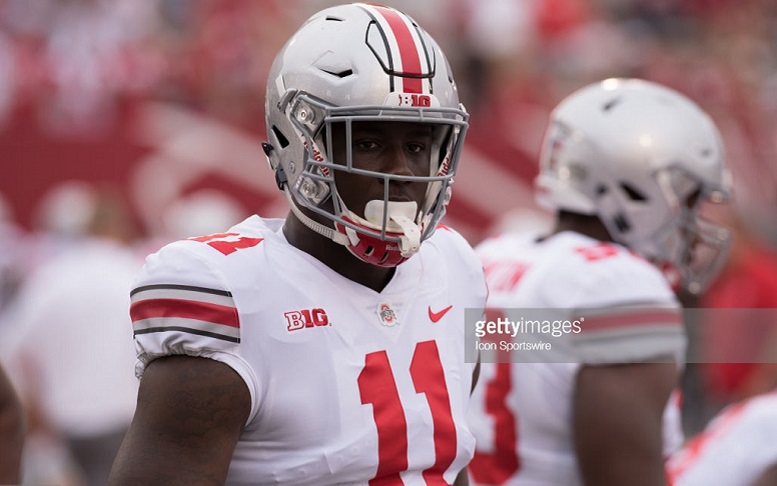 – Competent spin move that when combined with momentum is hard to block
– Has experience playing all over the defensive line
– Strong bull rush, sends offensive lineman backwards
– Moves laterally with efficiency, able to get off blocks
– Shows promise as an interior lineman
– Powerful, long reach

Ohio State defensive end Jalyn Holmes definitely has the size and length many teams will be seeking coming this April. The defensive end comes in at 6’5 and 270 lbs and uses his long reach to his advantage.

In the land of the NFL though, being superior athletically isn’t so much of a gift as much as it is a requirement. What Holmes brings to the table besides his incredible length is his versatility. The Ohio State defensive lineman has played all over the defensive line, as a five technique, three technique and even lined up over the center. Take note of his versatility below as you will see Holmes produce from a multitude of positions.

Note the explosive bull rush and power that Holmes possesses. Right off the snap, he punches the USC left guard backwards and even turns him completely around. Most impressive though is Holmes’ ability to turn a powerful pass rush without much or any momentum. Also note his position on this play, as the Ohio State defensive end is lined up as an interior rusher.

If versatility is the first word that comes to mind when watching Holmes play, then power is definitely the second. Watch above as the Ohio State team captain (far left side of defensive line), uses a nifty spin move to once again knock another offensive lineman off balance. His spin move is a savvy asset to have and his ability to convert it into raw power is an even bigger bonus.

Another play and another position change for the Ohio State defensive end. This time Holmes is standing up as a pure edge rusher, yet another example of the versatility he flashed during his college career. Not the fastest or most athletic edge rusher, Holmes does struggle with a bend but on the play above he does show an adequate swim move. Once again, the common denominator with all of Holmes’ highlights are his long reach and physical tools, which he can use at will to dispose of any offensive lineman.

Holmes really showed some positives against the run on film. On the play above, the Ohio State product is able to avoid getting lost in the garbage, dodging the USC right tackle. Then he is able to continue to move laterally efficiently while fending off a block to make a tackle on the ball carrier. Throughout his tape, Holmes shows the ability to sidestep laterally while maintaining enough leverage to make a play.

Ultimately, it seems that Holmes is better suited as an interior lineman than a 4-3 exterior lineman for a few reasons. The first being that he just does not possess the freakish quickness or twitch required out of the position. If Holmes’ hands fail him, he is left scrambling and out of options just like the play above.

Secondly, watching film, it is evident that all of Holmes’ big plays come as an interior lineman where he is able to use his strength and long length to bully his way into the backfield. While his versatility leaves a lot of room for his future team to select how they wish to use him, eventually they are going to have to nail down on one role or risk stunting his development. A role where Holmes seems best suited to succeed is an interior defensive lineman as he shows the power to be a 4-3 interior pass rusher and the run stopping ability to potentially even be a 3-4 defensive end.

While it is a no short of a compliment to be known as the jack of all trades, eventually you must find your niche. That will be the task for any team interested in drafting Holmes as they try to plug him in a place where he can be most effective. While defensive line is likely one of the last areas of need for the Pittsburgh Steelers, the team has been known to dip into the talent pool from Ohio State under Mike Tomlin.