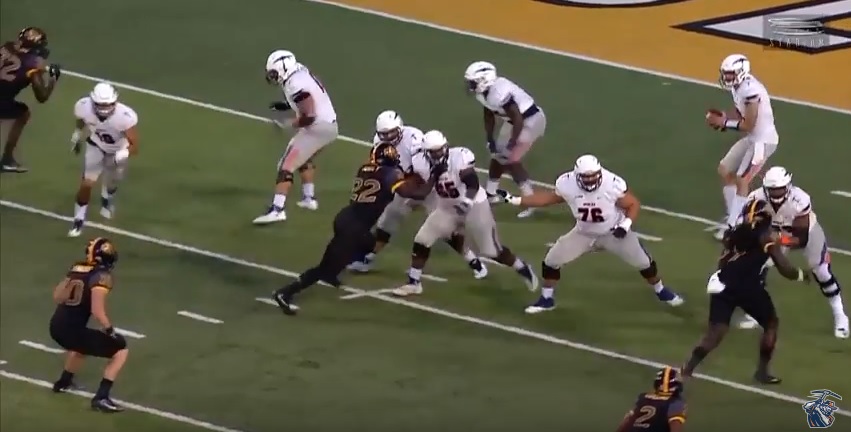 -Mauler in the run game
-Brings same nastiness as a run blocker to his pass protection sets
-Works to second level efficiently with smart routes to defender
-Underrated on the move as a blocker
-Short, squatty frame that is power packed
-Strong, powerful hands that allows him to latch onto defenders
-Balanced stance that allows him to strike with force in any direction
-Explosive lower half with loose hips

-Can be a step slow at processing stunts and twists when a defender is lined up across from him
-A bit slow moving laterally when in line as a pass protector
-Can get caught off balance by strong, squatty defensive linemen
-Small school guy with questions about competition

When it comes to the discussion about who the best offensive guard is in the 2018 NFL Draft, the conversation starts and ends with Notre Dame’s Quenton Nelson. But if you want more bang for your buck in terms of value, waiting until early Day 2 to take UTEP’s Will Hernandez just might be the smartest move you can make.

In terms of athleticism and nastiness, Hernandez brings just about as much, if not more at times, than Nelson does to the table. One is a power program product, while the other simply toiled away with the UTEP Miners for four years, quietly building a resume’ that can stack up with any offensive linemen in the last few years.

Will Hernandez is an absolute mauler on tape. He honestly looks like a Grizzly Bear out there on the field with his squatty, powerful frame and the throwback neck roll underneath his uniform.

Despite coming from UTEP and having some concerns about his competition level, Hernandez is the real deal. In limited action against big-time programs like Texas, Oklahoma and Arkansas, Hernandez simply dominated a majority of the snaps against higher rated college recruits.

He’s one of the stronger guards I’ve seen at the college level in the last few years. He’s not a guy that’s going to bury you by driving his legs, but he’ll toss you around like a ragdoll.

Well, that’s one way to take a DT out of a play. Powerful upper body on Hernandez. pic.twitter.com/YbOSUuHCiv

Hernandez has enough strength here in his upper body during the 2016 season to legitimately toss the Texas defensive tackle to the ground before then rolling on top of him, taking him out of the play completely.

While Hernandez is an athletic guard who can move well in space, he’s not a guy who you’ll see driving his legs to push a defender 10 yards down the field. He’d rather get you on the ground quickly, almost like a wrestler, or simply use his body positioning to take you out of the play.

Against Oklahoma this past season, he helped spring a long run simply by engaging in a stalemate in the hole before turning his body at the last second to put himself between the Sooners’ defensive tackle and the UTEP ball carrier.

Here’s a better angle of the previous play. Hernandez is very powerful in his upper body. pic.twitter.com/UZFicvxQla

It doesn’t look like much on tape, but it’s the subtle hip movement at the last second that takes a small lane and opens it up larger, allowing the Miners’ back to slide through untouched for the big run.

In pass protection, Hernandez is more bully than technician, which is fine with me. I’d rather a guy have a guy with Hernandez’s build for a guard attack the rusher instead of waiting to catch him.

When he’s physical in pass sets, he’s nearly impossible to block due to his impressive strength and ability to latch onto a defender, shutting them down quickly.

Despite the strength and ability to latch on, his lower body can be a bit slow at times, resulting in “lost reps.” Watching film, he appeared a bit slow laterally, but once he showed up at the Senior Bowl, those concerns seemed to be erased, at least in 1-on-1 reps.

But even when he may have lost reps during 1-on-1 drills at the Senior Bowl, Hernandez’s lower half was so explosive; he was able to recover quickly to set back up in proper position.

OG Will Hernandez “loses” this rep if you’re gauging it off of depth of defender. But look at how quickly Hernandez pops his hips open to reset his feet!!!!

This is a great look at a pretty special hip hinge rep from a 340 lb man. pic.twitter.com/VC6QllARO1

Seriously, look at how fast his lower body resets. That’s insane for a guard, especially one that weighs 340 pounds. Honestly, he reminds me a lot of Larry Allen.

He’s going to test well for his position at the combine, and he already had a tremendous week at the Senior Bowl.

You’re getting a similar player, but with better value.