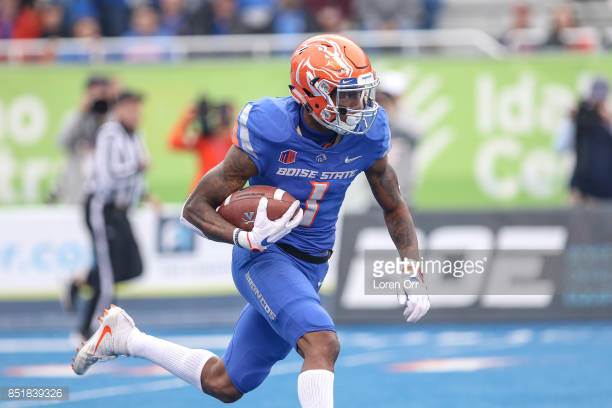 – Excellent vertical threat who routinely wins deep, playmaker
– May not run off the charts but long strider and builds up speed
– Does well to track the football vertically, late with his hands, and adjusts to the ball well
– Quick to the tuck after the catch, good burst after securing the football on short/intermediate catches
– Willing to go over the middle and make tough catches in traffic
– Good route runner, able to sink hips and burst at the top of his route to create space
– Size creates big catch radius
– High upside player with room to grow
– Potential to be used as a gadget player, QB background
– Highly productive college career, also KR/PR capable
– Strong football bloodlines

– Lanky frame and needs to add some weight
– Has to be more consistent bringing both hands to the ball, especially downfield, instead of trying to make acrobatic, one-handed grabs
– Below average blocker who needs to show more effort
– Has to get stronger and do a better job of beating press man and reroutes in zone coverage
– Mostly used as the X receiver, didn’t move around very much

Wilson Jr. was a fun guy to watch. He probably isn’t going to run a 4.4 flat but the guy can scoot and was a monster vertically. He can win at all levels of the field but running a go route is where he’ll make his money. And in college, often did.

Need him to attack the ball with two hands when it’s outside of his frame. It’s tough, obviously, but no receiver is going to make a living off one-handed grabs. Has a chance with two here, inside arm isn’t locked, but he lets it clank off his outside hand.

Here shows the good and bad. Turns the corner around on the 7 route. Pass is definitely thrown behind, a terrible ball by QB Tanner Lee, but you see him adjust with just one hand, too.

Boise State @BroncoSportsFB WR Cedrick Wilson averaged the 7th-highest yards per route run among senior WRs this past season, showing off impressive moves on Day 2 of the #SeniorBowl pic.twitter.com/4WD25PtcTu

Still, I love that route. Stem to the inside with eyes and hips and then break away to the sideline.

I see him as a rich man’s version of Chris Moore, who was drafted in the fourth round by the Baltimore Ravens in 2016. Not blazers but vertical threats. Wilson is a much better prospect though. Game is more more well-rounded.

The Steelers should be in the market for a WR but I think Wilson Jr. will be off the board before they take a hard look at the position.