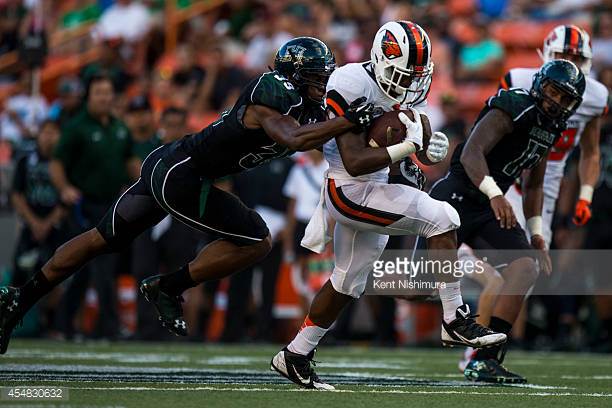 – NFL size and looks the part
– Reliable tackler who plays with leverage, aggressive filling the alley and can be an impact tackler
– High effort player
– Versatile, asked to line up all over the front, and has lots of special teams experience
– Succeeds in man coverage against tight ends, knows when to be aggressive and does well to high point the ball, compete at the catch point
– Chip on his shoulder, sacrifices his body, physical player
– Great starting experience, overall playing time, and regarded highly by teammates

– Questionable long speed and could limit him to playing in the box, near the LOS (could run in 4.6’s)
– Unable to squeeze sideline throws from Cover 2 alignment
– Limited upside, unlikely to be an elite playmaker
– Average production senior season
– Some medical questions that need to be answered, suffered severe knee injury in

Henderson had a strong Senior Bowl week and definitely helped his stock. He’s a well-rounded player who was asked to do a ton for Hawaii. Play in the box, play single high, work over the slot, and even in his senior year, still ran down kicks and punts. And he did it at an acceptable level.

He’s a reliable tackler who isn’t the most powerful hitter but comes to balance and plays with leverage. Willing to sacrifice his body and fill the alley. Took a good blow against Wyoming to help make the stop and hurt his shoulder for his troubles.

And on tape and at Mobile, he showed he’s capable of playing man coverage over the tight end and holding his own. Check out this INT in one-on-ones against Mike Gesicki, a sure fire Day Two selection. Gesicki creates space at the top (it’s a drill heavily in favor of the offeonse) but Henderson is able to close the space, get his head around, and make the pick.

It showed up on Saturday, too. Here’s an example of him playing in space, against a good team/quarterback in Josh Rosen, high-pointing and breaking the ball up.

I don’t have many negatives listed in his report but the ones that are there are pretty big. I just worry about what kind of athlete he is. At first, I thought he could play FS but watching him more, I’m convinced he is going to be a box strong safety. He told me that’s where he feels most comfortable at. That’s not a bad thing – at all – but it’s a limit and for Pittsburgh, not the bigger need of the two positions.

Example of him just not having quite enough speed. Hoping I’m wrong but I think he’s going to run in the low 4.6’s. Back pops out of the hole and Henderson can’t chase him down. Ends up with this weird two-handed shove.

I do love his special teams background. I think at minimum, you’re getting a great player there who has done it his whole career. Not something you have to teach or get him to buy-in.

His floor is probably Larry Asante/Rontez Miles. His ceiling is a Barry Church type. I do like him as a prospect but for Pittsburgh, there are going to be better fits.

Games Watched: at UCLA, at Wyoming, at Nevada, Senior Bowl