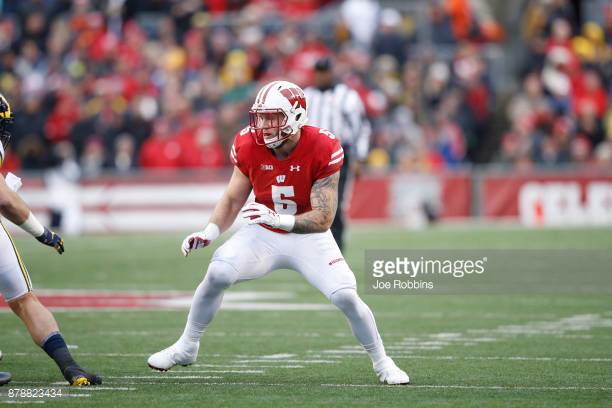 – Well built with good length (32 5/8) and big hands (10 3/8)
– Refined pass rusher who hasn’t spent much time at position and should continue to grow
– Varied pass rusher with good hand use and has a pass rush plan capable of winning in multiple ways, able to counter tackle’s set
– Doesn’t get himself run up the arc and stays active in the play
– Sets a good edge in the run game, strong base and doesn’t get washed by bigger tackles
– Versatile, played both sides, field/boundary
– Comfortable and capable spot dropping into coverage, began career as an ILB
– Runs to the ball, gives good chase, no loafs
– Good processor in zone coverage
– Still learning details of the position and already shows good amount of refinement

– Average athlete who doesn’t have great bend to win the edge on a speed rush, will struggle to win without initiating and working through contact
– Will not thrive in man heavy scheme in coverage
– Rerouting in zone coverage needs work, want to see him be more physical and get receivers off track
– Does he have a true, go-to move?
– Needs to finish tackles, misses more than he should, has to drive with lower half and complete the play
– Good but not great production, though scheme limited some of that
– Only a one-year starter
– Knee injury concerns

Let’s make one thing clear. Dooley is not T.J. Watt. He isn’t the top level athlete and won’t test like one either. But like Watt, he’s versatile and refined despite not having as much time at the position (though Dooley has more than Watt).

What Dooley brings to the table is sort of the anti Bud Dupree. An average athlete but he plays with power, hand use, and a strong football IQ. He can win in a ton of ways. That was especially on display in one-on-ones at the Senior Bowl when he had a two-way go, not something he was always given in Wisconsin’s structure.

Like on this rep, good hand use to knock the tackle’s hands away, create the soft edge, and dip under.

Or here. Watch the right tackle. Dooley has the strength to toss him away.

He’s comfortable moving backwards just as he is going forward. Not on Watt’s level because he isn’t *that* athlete with that change of direction ability. But his work as an inside linebacker made him comfortable dropping and we see those traits carry over on the edge. Played on his feet, moved around, he’ll be able to execute anything in the Steelers’ scheme.

Like I said, his three cone and agility times won’t be in that upper tier like Watt. He can’t bend the edge like a premier pass rusher and that does cap his ceiling/value but he’s going to offer steady production. One area he has to work on is finishing some tackles. In everything I watched, it popped up at least once a game. Base too narrow as he tries to finish here and he lets the back go. I do like the wrong arm technique to work off the potential split zone, even if the TE didn’t end up engaging him.

You’re going to get a guy similar to Anthony Chickillo. Hopefully a bit better. Not an elite rusher but a steady one who can handle everything the scheme throws at him. In Pittsburgh, that’ll be a lot.