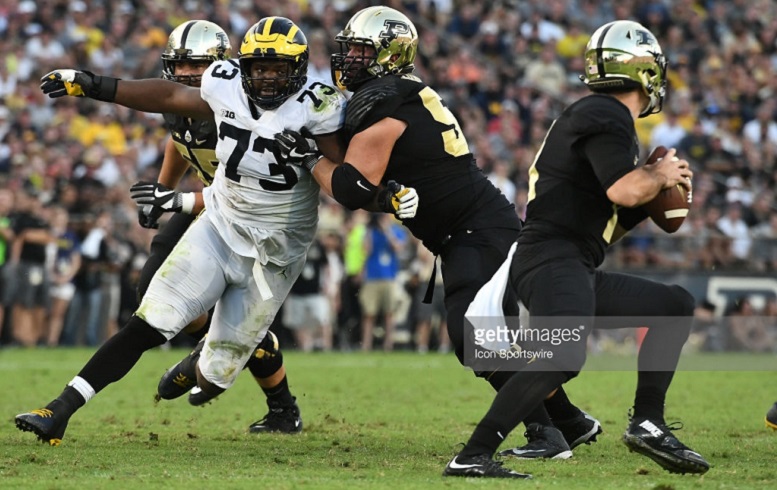 –Quick first step off the snap.
–Powerful hands that knock blockers back.
–Plays equally well against the run and pass.
–Innate ability to “feel” where the ball is going
–Good closing speed
–Great at shooting gaps while using his natural quickness
–Very athletic for a man his size

#73 lines up shading half of the center’s body. He gets a good jump off the snap, quickly slips past the center and guard (while knowing it was too quick). Hurst feels the screen, screaming towards the flat, then finds the back. The Wolverine hurdles a downed defender in his pursuit to make an athletic tackle downfield.

Hurst once again lines up on the outside shoulder of the center. The nose guard gets good penetration going underneath the offensive guard’s block while keeping his eyes on the quarterback. As the signal caller hands off the pigskin, the rabid Wolverine pounds the runner to the ground for a 3-yard loss.

The defensive tackle lines head up over the guard. Hurst stunts inside off the snap and is immediately picked up by the center. The Wolverine defender is now stood up, which takes away his power and leverage. This helps create an unchallenged running lane for a large gain by the quarterback.

The Wolverine defender lined up on the outside shoulder of the right guard and gets across the line quickly. #73 shoots his arms out which create separation and leverage against the Nittany Lion blocker. Hurst’s lack of vision and uncomplicated way of shedding blocks allows him to be taken out of the play.

While I enjoy the athleticism and gambling mentality of Maurice Hurst, the Steelers would not be a good fit while running their 3-4 front. He is too undersized and undisciplined, which would put the rest of the Pittsburgh front seven on tilt. #73 would be a better fit as a 3-tech on a 4-3 front, and could perhaps develop into a poor man’s Aaron Donald.