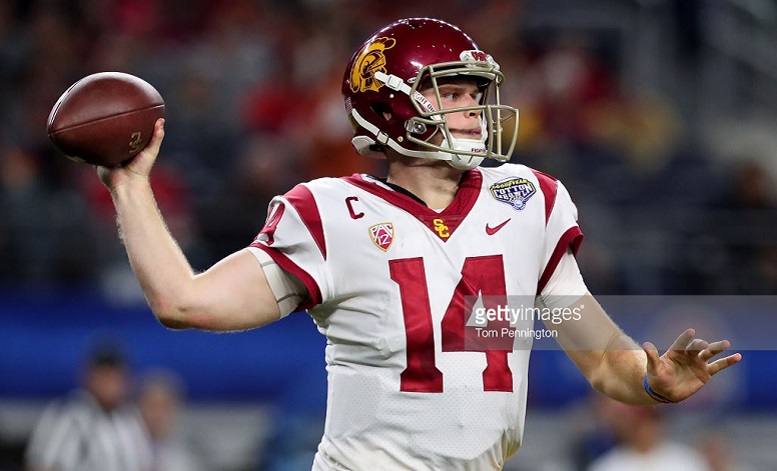 First up in our 2018 draft profile series is USC quarterback Sam Darnold.

– Exceptional movement in the pocket and willingness to stand tall in the face of heavy pressure
– Excellent when throwing on the run and in scramble situations
– Great mobility behind the line of scrimmage, as well as a legitimate threat to pick up first downs on the ground
– Ability to successfully complete full-field reads and consistently looks off safeties/backers
– Elite ball placement and accuracy, regardless of coverage or pressure
– Comfortable throwing/reading pro-level route concepts
– Capable of throwing accurately with both touch and strong velocity
– High Football IQ
– Very efficient at reading RPO’s
– Good Composure/Poise

– Decision-making can improve – his INT stats could easily have been much higher
– Sometimes holds the ball too long; decisiveness can improve
– Slight hitch/elongation in his throwing motion; however, it’s not terrible by any means
– Occasionally threw high over the middle, leading to several interceptions or big hits on his receivers
– Feet can be slightly too active in the pocket at times, leading to balance and timing issues
– Ball security can improve

In a quarterback draft class loaded from top to bottom, Sam Darnold is one of the clear standouts. He has no major flaws in his game and possesses many of the intangibles that will help him smoothly transition to the NFL. If he can polish some basic fundamentals and sharpen his decision-making, he has the potential to be an immediate impact player for whichever team drafts him.In my opinion, Darnold’s two biggest strengths are his toughness and elite pocket movement. Play after play, and game after game, I watched him expertly side step unblocked pass rushers, plant his foot in the ground, and unflinchingly deliver strikes downfield. For example, in this first clip against UCLA, watch Darnold step under the outside rush and then slide out of the pocket before delivering a pinpoint throw on the sideline. His ball security could improve on this play (his left hand loses contact with the ball), but overall he shows great feel and avoidance of the rush:

Later against UCLA, Darnold again does an excellent job of subtly sliding in the pocket and keeping his eyes downfield before delivering an accurate pass to his receiver. This is an extremely high level play that he makes look easy. He made plays like this over and over again:

In this next clip against Texas, Darnold demonstrates his ability to make accurate throws in clutch situations, despite operating in less-than-ideal pocket conditions. He routinely kept his eyes downfield while simultaneously evading heavy pressure or protection breakdowns. Additionally, notice his ability to place quality touch on his throws when necessary:

Another impressive tool in Darnold’s skillset is his ability to make plays with his feet. While he obviously is not the smoothest or most electrifying runner in this year’s QB class, he possesses the athleticism to make defenses pay if they do not give him the proper respect. Colorado learned this lesson the hard way in this next clip where Darnold scrambles for a 25-yard score:

On the negative side, as I briefly mentioned above, Darnold’s ball security has room to improve. Very often his off-hand lost contact with the ball when he got deep into his progressions or when he scrambled behind the LOS. For example, in this play against Colorado, Darnold fumbles the football without even being touched by a defender. Plays like this are unacceptable in the NFL:

Lastly, Darnold was prone to a couple errant throws and bad decisions per game. While these errors did not always show up in the stats sheet and were not always his fault, they are still cause for some concern and could become more pronounced at the next level. For example, in this final clip against Texas, Darnold badly overthrows his intended receiver down the middle of the field, leading to a costly interception. Although he generally was a very accurate passer with excellent ball placement, throws like this seemed to get away from him a couple times a game: