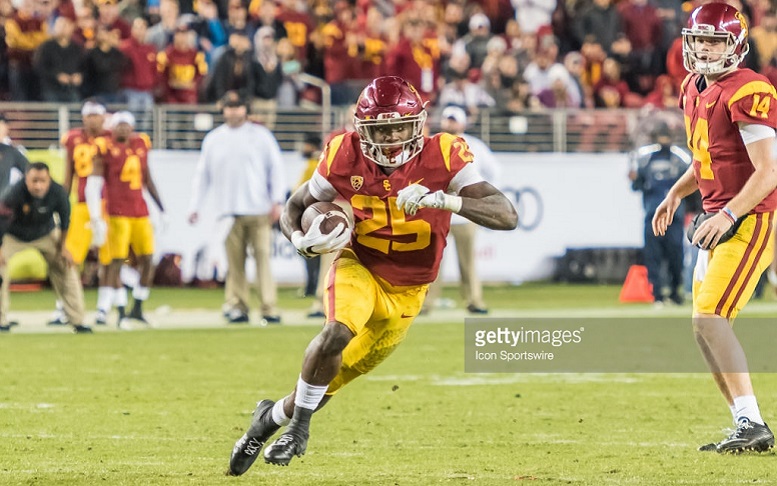 – Incredibly quick in the open field
– Runs with momentum making Jones a difficult target to tackle
– Hits the hole with immense burst
– Protects the football, almost fumble free throughout his time at USC
– Plays bigger than his size
– Possesses home run speed

When it comes to USC running back Ronald Jones II, one word can be used to wrap up the prospect’s resume – productive. The USC product rushed for over 1500 yards in his final season while averaging almost six yards per carry. Jones was able to be one of the nation’s most productive runners with his great quickness, burst and strength. The college running back has shown traits that will make him an interesting option in a deep running back class.

Jones shows a lot of comfortability and success running behind USC’s zone blocking scheme. The running back is capable of reading his blocking and cutting back quickly to gash the defense.

Here is Jones’ cutback style in play against Stanford. Jones is a decisive and smart runner who understands when the perfect opportunity to cut back presents itself. Another key feature worth noting is Jones’ strength and contact balance to run through an attempted tackle by a Stanford defender. Jones runs harder than his size, a big reason why he racked up 892 yards after contact this season according to Pro Football Focus.

You cannot be a successful running back in the National Football League without strength, toughness and a mean streak. Jones shows all three on the play above as he shakes off the Colorado defensive back, doing his best Marshawn Lynch impression in the process. These are the kind of runs that will make scouts fall in love with the USC running back as it is not only the strength and toughness that he flashes on the play but the overall perseverance that Jones displays fighting for extra yardage.

Here is a trait that pops up often on Jones’ tape, his side step to evade a defender crashing into the backfield. Perhaps his best trait, Jones’ lateral agility not only gives him the ability to turn a potential negative gain into a positive but the running back is a difficult target for defenders to wrap up one on one. The above play was just one of 56 missed tackles that Jones forced last season according to Pro Football Focus. Jones shows fluid body control and agility which will make him a valuable asset at the next level.

Jones shows quick burst towards the line of scrimmage when a hole presents itself, as it does on the play above. From there it does not take long for the USC running back to transition into his second gear. Jones is an explosive runner with home run potential once he enters the second level. With a burst to the line of scrimmage and speed to distance himself from pursuing defenders, Jones is one of the elite playmaking running backs in this year’s class.

An able and willing blocker, Jones has experience remaining in the pocket on third down. Jones shows some consistency with picking up oncoming blitzers, though he occasionally finds himself dominated by larger and better talent. The USC running back will need to continue improving his pass blocking techniques upon his entry into the NFL. As a receiving threat, Jones has yet to hit his potential as the running back has not been fully utilized as a receiver at USC, though his athleticism makes him an intriguing receiving option. Perhaps the one area of his game that could use some work, Jones will have to improve and expand his third down contributions if he wishes to be a three down back at the next level.

Another positive about Jones’ skillset that may fly under the radar is his ball security. On 591 career carries at USC, Jones has only fumbled twice. With his big play ability and consistent ball security skills, Jones is a momentum builder and not a momentum killer.

In a deep running back class, Jones is a name to not be forgotten. The running back runs with momentum that makes him a difficult target to bring down and possesses the athleticism to turn any hand-off into a big gain. While the Pittsburgh Steelers may have more pressing needs than running back, stranger things have happened. What is certain is that the team that selects Jones will be adding an explosive two down running back that appears ready to contribute immediately.

Games Watched: vs Stanford, vs Colorado, vs Ohio State, vs Washington State