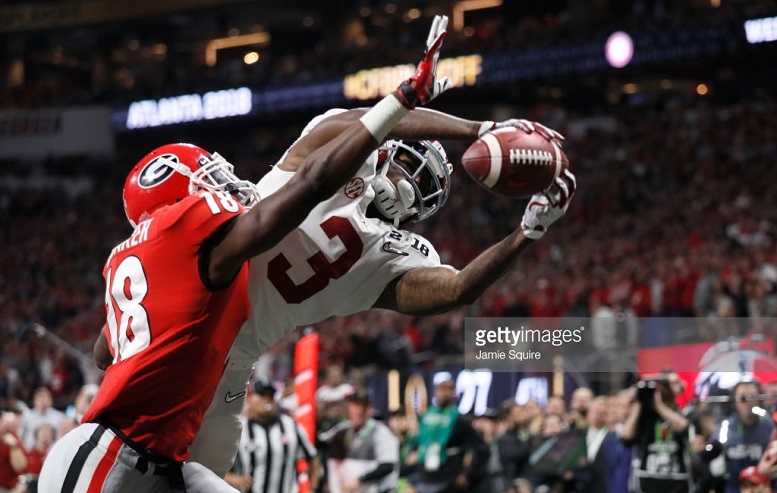 – Excellent route runner with a strong ability to create separation
– Has home run hitting speed, but also the elusiveness to play in the slot
– Terrific hands and concentration when receiving the ball
– Has tremendous awareness and does a very good job adjusting to where the ball is thrown
– Reads the defense extremely well
– Does not give up on the play. Finds ways to get open
– Very durable. Never missed a game in college.

– Willing to block, but does have some trouble with more physical corners
– Despite great hands, will drop a ball occasionally
– Not the biggest at 6’0/1, 190 pounds
– Thin body type
– He will be 24 this year

Ridley is the best wide receiver prospect in the 2018 draft class. His speed, route running, awareness, body control, hands and athleticism will make him a coveted prospect come April. He does so many things right, but his route running has to be at the top of the list. He was one of the best route runners in college football this past season. He has incredible elusiveness that allows him to make quick, hard cuts. In his college career, he punished teams that covered him one on one. His speed is a gift, but his ability to cut and fool defenders is his biggest asset:

Ridley is also extremely skilled at getting open when the quarterback is struggling to find a receiver. His recognition skills are displayed below as he realizes that his quarterback is still looking for a guy to throw to and he gets open at the very last second. This play also shows how great his hands are. It is difficult to see; the ball is thrown a bit high, but Ridley uses his long arms to reach and snag the ball out of the air.

The same awareness is shown here:

Ridley’s explosiveness and speed does not have to be used solely for the deep ball. He accelerates to full speed so quickly which makes him a threat on end-arounds and screen passes. Even if defenders are collapsing on him, he uses his speed to get as many yards as possible.

Ridley is not afraid to block in the running game, but from what I saw, he struggled when blocking bigger defenders. Below, he attempts to block Florida State cornerback Tarvarus McFadden who has 20 pounds on Ridley. McFadden breaks Ridley’s blocks easily both times without much trouble. In the second gif, he does a good job of baiting McFadden into thinking that he is running a route, but once Ridley makes contact with him to block, he sheds it easily.