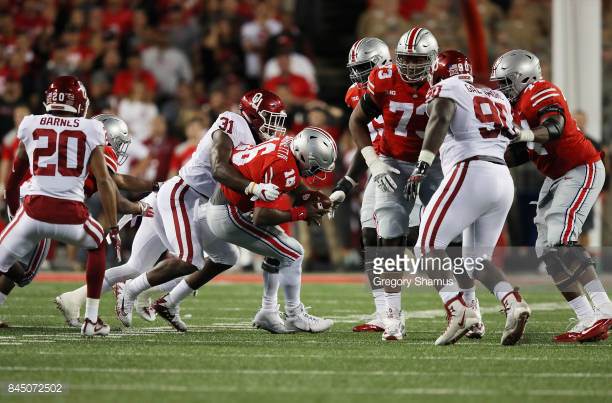 -Explosive get-off at the snap, whether standing up or hand in the dirt
-Great hand usage in close against offensive linemen when rushing the passer
-Knows how to create separation and leverage against OL
-Elite change of direction skills for an edge rusher
-Flashes ability to convert speed to power
-Attacks the pocket with good instincts as to where QB will end up
-Compact, thick build for position

-Undersized, height-wise, for position with questions about his reach
-Doesn’t seem to have an attack plan early in games when rushing the passer
-Gets covered up by length and mass at the line of scrimmage against the run
-Gets flattened out to perimeter by good run-blocking offensive linemen
-Doesn’t appear comfortable or confident dropping into coverage
-Too inconsistent at setting the edge against the run

-Son of Nigerian immigrants who picked up football late in high school
-Finished with 21.0 career sacks at Oklahoma, good for second in program history
-Named First-team All-American by Walter Camp in 2017
-Named Second-team All-American by AP, FWAA and Sporting News in 2017
-Semifinalist for the Bednarik Award, Butkus Award and Lott IMPACT Trophy
-Named the co-Big 12 Defensive Player of the Year and first-team All-Big 12 by the league’s coaches
-Played in 46 career games at OU (26 starts)

Oklahoma EDGE Ogbonnia Okoronkwo is a very hard case study, in terms of where he’d fit in the NFL. On tape, he flashes constantly as an elite pass rusher, but when playing the run as an EDGE, he struggles mightily to hold up against good run blockers. Just pop on the Georgia-OU Rose Bowl tape from this year and watch guys like Isaiah Wynn and Andrew Thomas handle him easily against the run.

That’s strictly up at the line of scrimmage though. When Ogbonnia was moved back to an off-ball linebacker against the Ohio State Buckeyes on the road in certain situations, he flourished.

Man, when Okoronkwo plays off the ball, he’s tough to handle there too. Too fast for the OSU OL to get to him, makes the play on Barrett in space. Reacts quickly. Great initial burst too. pic.twitter.com/XhoSqunNBu

Look at the way Okoronwko processes the play in front of him, reacts quickly to the block coming from Jamarco Jones and slips around the block to make the stop on Barrett in the open field.

This play alone leads me to believe that he can be a hybrid linebacker in the mold of an off-ball linebacker against the run, but an EDGE defender in obvious passing situations.

Although he is undersized for the EDGE position, he’s a freak athlete that moves well in space and has great lower body explosion to close ground quickly. He’ll rarely miss tackles in space, too.

When he’s playing on the line of scrimmage, the Sooners usually allowed him to pin his ears back and attack the passer, thanks to his great get-off at the snap.

Elite first step to get up field, bends the edge and works through block for the strip sack. Gets the strip with his outside arm too. pic.twitter.com/3tou5y7dEA

While the Texas tackle is able to keep engaged with Okoronkwo on this rush, he shows his speed and strength to work around the edge for the strip sack. This play here also leaves me not worrying as much about his length and reach for the position because he strips the ball with his outside arm, reaching the whole way across his body. He’s bendy and twitchy for the position.

Some draft writers will say Okoronkwo relies too much on his inside move when rushing the passer, but it’s nearly unstoppable with his leverage, athleticism and speed coming off the edge.

Honestly running out of words to say about Okoronkwo. My goodness, the get-off and the COD with the spin. Tackles have no answer for him. pic.twitter.com/hw0ePmt64q

When he gets moving up the field, setting up the tackle for a speed rush around the edge, he’s able to quickly flip into a spin move back inside, or simply redirect with just a shift of his weight, allowing him to burst through the middle.

In the GIF above, he’s able to force a holding call on Jones, who struggled with his speed, power and leverage all game long.

Need to see another example of that inside move?

Okoronkwo’s inside move is lethal. COD skills are elite for an edge rusher. Look at how quickly he redirects to easily beat the OSU tackle inside. pic.twitter.com/fxOMWSNJfC

Tackles have no match for it. I’m not sure any right tackle in the league, aside from maybe Philadelphia’s Lane Johnson, can match Okoronkwo’s athleticism on the edge.

Teams will undoubtedly have to send help on Okoronkwo when he blitzes, whether that’s with guard help inside, or forcing the tackle to set up inside on his sets, sending a back to chip on him out of the backfield.

The question I’ve seen a lot about Okoronkwo is, “can he move off the ball to an inside linebacker position, or a WILL?”

Honestly, with his athleticism and ability to learn the game quickly at such a high level, I think he can. He’s going to blow up the combine with his testing numbers, and I think he’s shown enough times on tape that when he’s kept clean against the run, he’s a chase and tackle type of guy.

As I mentioned earlier, I think he could move around on a defense as a chess piece, playing inside off the ball against the run, but coming off the edge as a pass rusher. I just wouldn’t ask him to spot drop much early in his career. He looks woefully uncomfortable doing it on film, and didn’t seem to have an understanding of route concepts at times.

Overall, I think Okoronkwo is clearly one of the best EDGE’s in this draft class, but I think there’s more to his game than just rushing the passer. I’d take a chance on him late Day 1 or early Day 2 and figure out where he fits best from there.