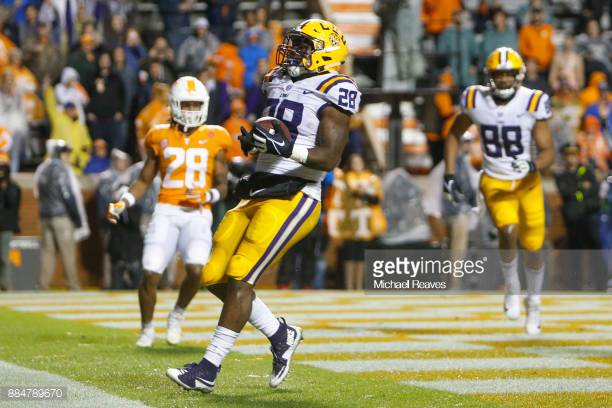 Set up in an empty set on a first and 10, the runner gets the ball and seems very reliant on his blockers to set the rushing lane. Williams needs to steady himself putting his hand on the pulling center’s back. #28 does not see the cutback lane and gets strung out, then swallowed up by the defense for a minimal gain. This play shows his vision issues and his stiff hips.

Lined up in a single back formation, Williams sees that all of his linemen have put a hat on a hat driving the defenders back. He finds a lane, stays low while keeping his legs driving, and fights through contact. This shows off his leg drive and balance that helps create a 9-yard gain, that got blocked for 4 yards tops.

Lined up beside the QB in the shotgun formation, #28 screams across the line of scrimmage into the flat. He catches the pigskin in stride, making sure both feet are in bounds maintaining his balance. I like the way this play shows off his quickness and soft hands in the passing game.

Once again the back lines up beside the signal caller in the shotgun formation, the back sneaks out to the flat while the Syracuse defenders are bearing down on the Tiger QB. Williams catches the ball in stride and starts to accelerate down the sidelines. #28 shows that he is a dangerous open field runner with some burst to spare on that 54-yard gain.

Faced with a third and 12 situation in a familiar spot next to the signal caller in shotgun, #28 steps up at the snap frontside to face a blitzing corner. He sets his base, gives up a little ground, and shadows his defender until the LSU quarterback launches the pass downfield. I like the way he set his base, kept contact, and flowed with the blitzer until the ball got launched. This will give him more opportunities to see the field with that kind of protection.

Williams is a low cost change of pace back that has room to grow. He should be available in the sixth to seventh round. The former LSU runner is not quick twitched and is more of a plodder, but has soft hands and can run between the tackles when blocked well. If the Steelers are in the market for a rookie back, Williams could make a nice, cheap investment.