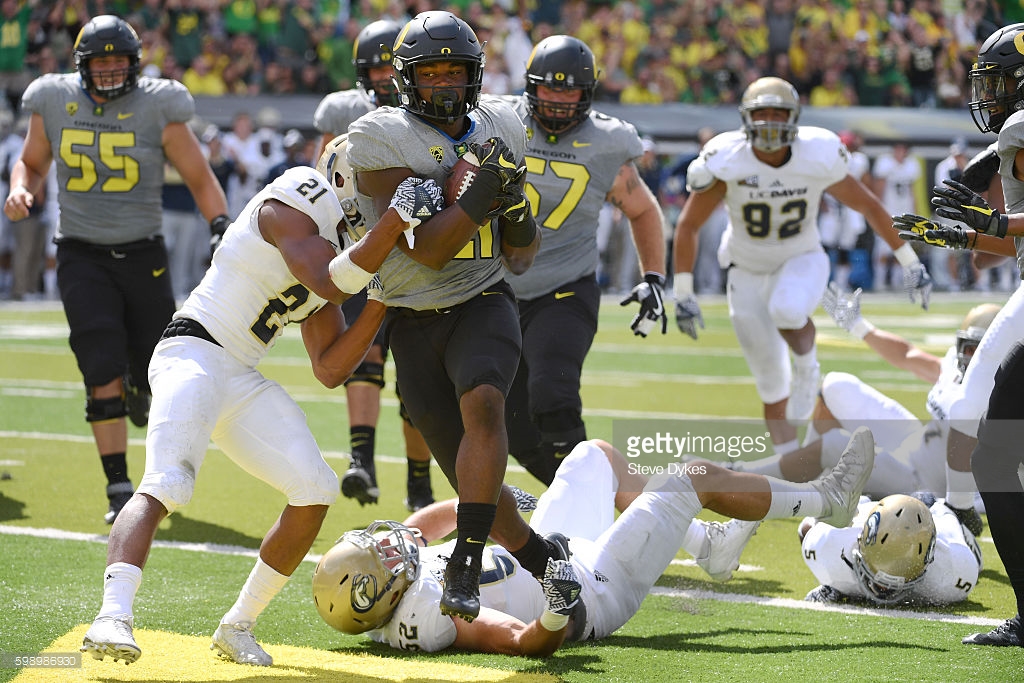 –Powerful, muscular build
–Sees the field and follows his blockers well
–Likes to find the cutback lane where most blockers and defenders are not.
–Good inside rusher
–Can get small in the hole to squeeze thru
–Decent in the screen game and will occasionally split out wide
–Falls forward and sometimes spins for additional yardage
–Willing blocker

–Huge combined career carries in high school and college.
–Takes a lot of punishment instead of dishing it out.
–Limited second gear.
–Gets brought down by the occasional arm tackle despite his size/power.
–Doesn’t create much on his own, more dependent on his blockers

–Five star recruit by Scout.com
–2017 Maxwell Award Semifinalist and 2017 Doak Walker Award Semifinalist
–Oregon’s only 1,000 yard freshman rusher in school history (1,365 yards)
–2018 Senior Bowl invitee
–Played in 51 collegiate games with 947 carries for 5,621 rushing yards (110.2 yards per game), 60 rushing touchdowns, and also caught 79 passes for 814 yards including 4 receiving touchdowns. In his freshman year, Freeman threw a single pass for a 26 yard touchdown.
–In his San Diego high school career, he had 7,606 rushing yards and 111 rushing touchdowns.
–Missed only two games his entire college career: Colorado (2016) with a knee injury suffered against Nebraska the week before and sat out his last bowl game against Boise State (12/16/17) to be healthy going into NFL Draft.

On a third and 10, the runner lines up beside the quarterback in the shotgun formation. At the hike of the ball, Freeman sets up in the flats to catch the ball. He immediately glances downfield reading his blockers and slips around would-be tacklers for a huge gain. Despite all his touches, #21 seems to come alive in the open field and was underused in his collegiate passing game.

Looking at a second and 1, the Ducks offense comes out with a 3 wide bunch formation almost hugging the sidelines. This allows #21 an even matchup against defenders at the snap while lined up beside his signal caller in shotgun. The runner sees every lineman putting a hat on a hat and jump cuts towards the opening at the line of scrimmage. Freeman explodes into the middle breaking an arm tackle or two, always keeping his legs churning. While he is neither the strongest or the faster back, the former Duck shows off his ability to navigate in close quarters and grab what he can.

With his team faced with a second and 10, the Ducks get creative with Freeman on a jet sweep to the receiver by having the back attack the outside backer at the line of scrimmage at the snap. #21 does a great job sealing the defender away from the ball and had a lot to do with the success of this play. He got low, kept contact through the whistle which shows off his ability and desire to block at the next level.

It’s deep in the Beavers territory with the Ducks facing a third and 1 situation. Once again Freeman is lined up at his familiar one yard to the side and behind his QB in the shotgun. Off the snap, the Oregon State defensive front gets penetration. Instead of trying to fight through it, #21 keeps moving around the mass of humanity until he finds daylight and walks in for a clean touchdown. It was his vision and patience combined with his almost wheel route running that took a loss and converted it into six points because he targeted where no one else was.

With a troubling fourth and 1, the back takes the pigskin from his signal caller from the shotgun formation. The runner sees a slight crease initially as he scurries towards the line, but is run down by an overhanging #33 who races behind the offensive line and gets to the hole before Freeman. The defender’s dive at the runner’s legs knocks him back and allows the rest of the Washington State defense to force #21 back. The talented playmaker couldn’t get low or fast enough to avoid the initial safety and got knocked back because of it.

The Oregon back is a decent NFL option in the third or fourth round, but his high school and college carries are too high for my or the Pittsburgh coaching staff taste. If his offensive line doesn’t give him a sliver to operate, the runner is cooked like a Thanksgiving turkey. While Freeman did flash at times, I like James Conner a lot more than him and would prefer a less plodding back to pair with Conner if the Steelers decided to not resign Le’Veon Bell.