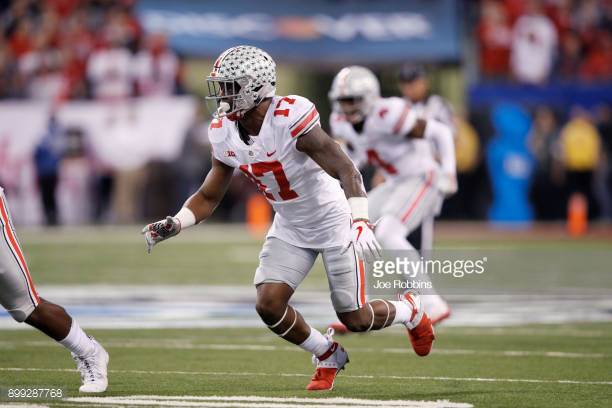 -Athletic, rangy linebacker that flows well sideline-to-sideline
-Loose, explosive hips to allow him to run with backs and tight ends down the field
-Good ball skills for position
-Comfortable dropping into zone coverage, or carrying receivers down the field
-Speed and athleticism allows him to correct mistakes quickly
-Impressive change of direction skills
-Defensive chess piece;  able to make plays from a number of different positions on D

-Skinny frame that gets overwhelmed at times by size of blockers
-Lacks physicality at point of attack
-Doesn’t use hands well and is slow to get off of blocks if he can’t slip around them
-Diagnoses plays slowly; noticeable hesitation on film at times
-Catches running backs when tackling in the hole, rather than trying to strike blow
-Can get caught sliding past his gap responsibilities against the run

If you’re looking for the prototype linebacker for today’s NFL, in terms of athleticism, range and coverage ability, Ohio State’s Jerome Baker might be your guy. He can flow sideline-to-sideline to make plays, will test extremely well at the Combine and can legitimately line up in the slot to cover receivers, running backs and tight ends in the passing game.

Just don’t ask him to be a physical, downhill linebacker against the run.

Weighing in at 225 pounds, Baker seems fine for today’s game on paper, at least coming out of college. But throw on the tape and it’s clear pretty quickly that he’s undersized for the position and could really struggle to hold up physically in the NFL against the run.

It’s a lite 225 for Baker, who looks more like a safety playing linebacker for the Buckeyes. While he’s not overly physical against the run, in terms of tackling, he sure does like to fly up into the hole to thump blocker, trying to blow up the play right in the hole.

Usually, it doesn’t work, but I appreciate the effort anyway.

Where Baker excels is in coverage. He can match up with a receiver in the slot, and seems very comfortable carrying a tight end or running back down the field. Where he struggles in coverage is with his hesitation in the middle of his coverage.

These next two clips you’ll see will go for touchdowns, but I think the problem for Baker on each play is very correctable with the right coaching.

Slight hesitation at mesh point by Baker with Fuller allows the Clemson back to create just enough separation from Baker on the wheel route for the score. pic.twitter.com/ifUbY4R0dT

Again, slight hesitation here by Baker allows Ian Thomas to turn up the field for the score. I do like that Baker can stay in his hip pocket though. Makes for tough throws. pic.twitter.com/kyiwIyM2wB

In the first clip, Baker is assigned the Clemson back on the wheel route out of the backfield in the 2016. As soon as the Clemson back breaks up the field, you can see a slight hesitation by Baker, almost as if he’s a half second too late processing what the back is trying to do.

Once Baker flips his hips, he’s able to run and recover on the play, getting a hand in early to try and break up the score. The ball is underthrown a bit, but Baker closed ground before that.

Against Indiana this season, Baker gets caught peaking into the backfield for just a hair of a second while in coverage against tight end Ian Thomas, allowing the Hoosiers’ tight end to slip up the field, creating just enough separation to make an unreal touchdown catch.

If Baker can clean up the mental lapses in coverage, he has the athleticism, length and footwork to stay in the receiver’s hip pocket in coverage. That gives your defense a serious chess piece.

Playing the run, Baker flashes at times, but its too far and few between for my liking. That’s not to say I don’t like the play. I’m simply saying he’s definitely a long-term project in that area.

For one, he rarely uses his hands against blockers to try and create separation, which leads to him getting engulfed in the run game when he’s not able to stay clean and flow to the ball.

First time I really saw him use his hands well against a blocker at the second level. Quick swim move to beat first blocker and then slips past second with a quick hip turn to help make the stop. pic.twitter.com/df8FfLofxh

In a game against Illinois this past season, Baker actually looked pretty stout against the run, using his length to stay clean in traffic, allowing him to find the football to make stops.

I loved seeing the quick, efficient swim move to beat the first blocker here in the second level, and then the subtle hip turn to reduce his target area for the next blocker, allowing him to slip off easily to have a hand in the stop.

Against Michigan in the rivalry matchup to close the season, Baker struggled a lot against Michigan’s power run game. But when he had the opportunity to use his athleticism to make plays, he certainly did that.

Baker blows this play up. Sees what’s happening and burst forward to beat the blocker to the spot. Plays like this have me intrigued for what he could become with the right coaching. pic.twitter.com/XQYqoBZEWL

Check out the way he beats the blockers to the designated hole, blowing up the play in the process. Sure, he doesn’t make the stop. But his speed and athleticism to get to the spot before the blockers helped back everything up for the Wolverines’ play.

Overall, he’s a freakish player, in terms of his athleticism for the position, but he’s going to need to develop some toughness against the run, and maybe even bulk up to around 240 pounds. His frame certainly has the room.

Based on his coverage skills alone, I’d take a chance on him in the late second, or early third round and hope that with the right coaching, he can develop into a solid starter on a winning defense.