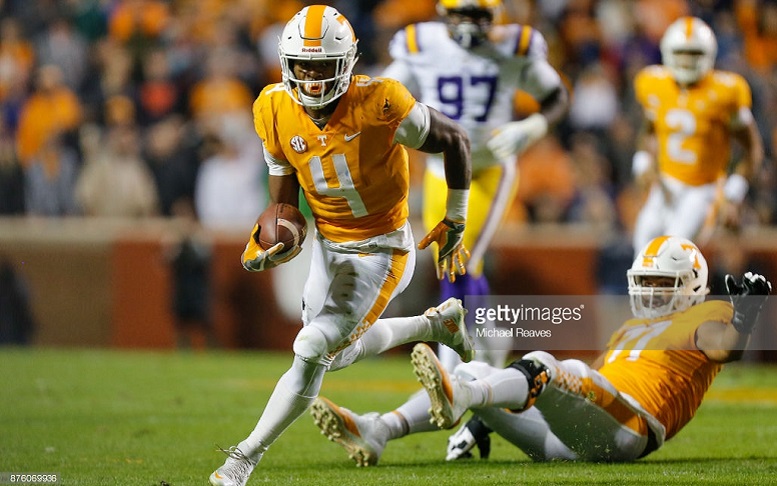 – Fresh legs, only started one game in the first two years of college
– Soft hands (had a catch in every game) and doesn’t slow down to adjust to the ball in the air
– Uses spin moves, stiff-arms, and jump cuts to break away from defenders
– Good vision to see blocks developing combined with balance
– Finds his second gear in the open field to separate from defenders
– Willing inside runner, but more effective on the outside

– Character issues: suspended a game for marijuana possession in 2017, rumbling of a domestic issue in January 2018, and as a freshman stomped on a Georgia player’s head at the bottom of a pile in 2015.
– Never carried the full load, shared with Alvin Kamara (2015-2016) and then a host of lesser talented backs in 2017.
– Limited power despite keeping legs churning
– Wants to take plays to the edges where NFL caliber talent will catch up to him.

– Rated a 3-star recruit by 247 Sports, ESPN, Rivals, and Scout.
– Scored 25 touchdowns as a high school senior as a rusher, receiver, punt returner, kickoff returner, and returning an interception.
– Three year high school starter at running back, cornerback, and returner
– Averaged over 10 yards a carry in his senior year of high school
– Played in 33 games for the Volunteers: 327 carries for 1,573 yards (4.8 ypc) with 15 touchdowns along with 43 receptions for 350 yards (8.1 ypr) and completed his only passing attempt for ten yards his junior year.
– He is an avid skateboarder, which helps him keep his hips loose.

It’s a first and 10 on the Volunteer 40 and they are trailing by ten in the 4th quarter. #4 is lined up to the left on his quarterback in the shotgun formation with another back to the right. The signal caller fakes a handoff to the runner to the right, which allows Kelly to make his way to the flat snaring the ball in stride. The Tennessee junior gets sprung by an excellent block that takes out two defenders and races down the sidelines. He uses a stutter step to set up upcoming defenders, swats another one of out of the way with ease, and then dips his shoulder back into the field of play to break another tackle ending his reception after a 28 yard gain.

Kelly on a first and ten deep in Volunteer territory behind by 24 points lines up three yards behind his quarterback in a pistol formation. The runner gets the handoff and tries to turn the corner moving laterally instead of north and south. This allows multiple defenders to corral him for a half yard gain. #4 got brought down with a single leg takedown, which demonstrates less than NFL caliber lower body strength.

Lined up once again behind the signal caller in a pistol formation, the back reads when he receives the handoff that the inside lanes were clogged. He opens up his hips, bouncing outside where there is a clear path to the endzone for an easy score. It was the combination of his patience, vision, lateral agility, and burst that made the touchdown scamper possible.

#4 is lined up a yard to the side of his quarterback in the shotgun on a second and eight play. Kelly steps up and identifies the free rusher. The back dives at the knees of the Kentucky defender. This barely slows down the Wildcat, but allows his signal caller to complete the pass for a decent gain. More effort and a solid base will be necessary if an NFL team is to trust him; otherwise it will limit his usage and give NFL defenses a tip-off in what play Kelly’s team is running.

John Kelly is a talented runner that should be selected sometime in between the third and fifth rounds during the NFL Draft in Dallas. While his limited tread, good balance, burst, and vision make him a desired playmaker at the next level, I doubt the Steelers would draft him with the marijuana and potential anger management issues that have already come to light.

Projection: Third to fifth round prospect