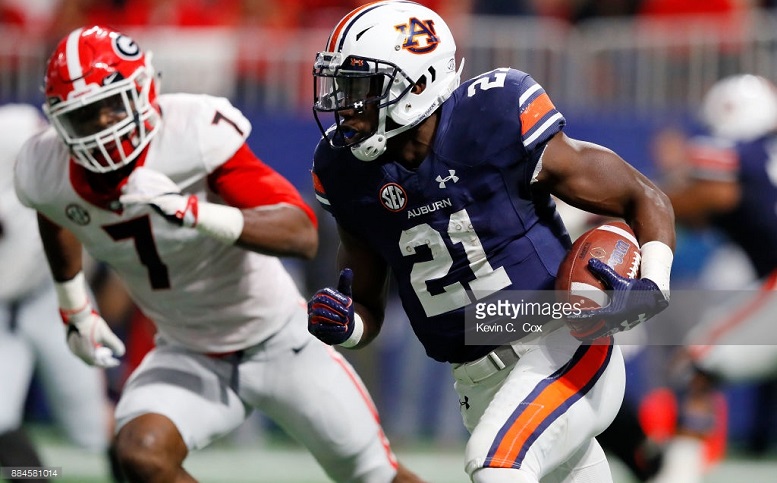 – Patient, waits for blocking to settle if no initial hole is present
– Frequently asked to pass block, gives it his all in pass protection
– Intense toughness, does not shy away from contact, lowers his shoulder to punish defenders
– Does have lateral agility capable of making defenders miss in the open field
– Excellent vision
– Gets skinny in the hole

– Durability concerns, dealt with shoulder and rib injuries down the stretch in 2017
– Pass protection could use some minor polishing
– Susceptible to getting caught in the back field waiting for a hole to develop
– Lacks breakaway speed and elite quickness

Auburn running back Kerryon Johnson is no stranger to the end zone, scoring 32 rushing touchdowns during his college career. A running back built for the end zone, Johnson is also built to bruise defenses in the trenches with his immense size. With his patience, vision and toughness, it is easy to see why Johnson has often been compared to Pittsburgh Steelers’ running back Le’Veon Bell.

Notice Johnson’s hop step behind the line of scrimmage as he waits for a hole to develop. A very patient runner, Johnson is confident in his vision and ability to not get over aggressive as he waits for the defense to show his hand. Reading the defense like a general, Johnson’s patient style allows him to always have a counter move ready for what opposing defenses throw at him. Feeding off the over aggressiveness of the Alabama defense, Johnson turns this carry into a huge gain. While no two running backs are exactly identical, the similarities in running style between Johnson and Bell are hard to ignore.

Johnson’s size and strength make him an excellent candidate to be a workhorse running back at the next level. At 6’0 and 212 lbs, Johnson runs with authority, taking out anyone in his path. Watch above as Johnson displays excellent contact balance, bouncing off two tacklers before stiff arming a third Ole Miss defender on his way to a big gain. On third and two, Johnson is not just thinking about getting a first down, he wants more. That competitive toughness is a trait that flashes consistently across Johnson’s college resume.

By keeping his legs turning and always pushing forward, it is hard to stop Johnson dead in his tracks. Instead the Auburn running back over powers his competition, lowering the boom and consistently falling forward to maximize the full yardage on any given handoff.

The Auburn running back has the accolades, a unique running style and the physical traits to be a top running back but does he have the smarts? Johnson answers that quite easily, showing top quality vision as he hits the hole with a quick burst. If there is a hole evident and clear, the Auburn running back will not hesitate, accelerating through traffic just as he does on the play above. Despite his size and the fact that Ole Miss is selling out on the run, Johnson is able to get skinny through the hole practically untouched and score an easy touchdown. While Johnson lacks breakaway speed, it is not much of an issue due to Johnson’s excellent vision.

Auburn asked Johnson to stay in the backfield to pass protect quite often during his college career and the running back has shown promising results. Johnson is a physical blocker and due to his size, he is able to anchor himself against an incoming defender. The Auburn running back constantly battles, giving it whatever it takes to keep his blitzer out of his quarterback’s path. While there is room for improvement, Johnson is ahead of most running backs entering the NFL when it comes to pass protection and is likely in need for a quick polish rather than building from scratch.

The only question about Johnson’s draft stock is perhaps his durability. After a 2017 campaign in which he received 309 touches, Johnson limped down the stretch, dealing with a shoulder and rib injury. Johnson’s shoulder issues date back to January 2016, when he underwent minor shoulder surgery causing him to miss Auburn’s spring practices. Other notable medical notes for Johnson are a minor hamstring injury during the 2017 season opener and an ankle injury suffered during the 2016 season.

When it comes to the tape, Johnson fits the mold of a workhorse running back at the NFL level. With his patience, vision and ability to get the most out of all his carries, Johnson has the body and skillset for an every down back. The only obstacle holding Johnson back is his medical report which is quite lengthy but a risk worth taking for an NFL ready running back.

Should the Steelers be in the market for Bell’s replacement this offseason, they could find an easy replacement in Johnson who is almost an identical fit. Both are big, savvy runners who can carve up a defense with their patience and power.

Games Watched: vs Alabama, vs UCF, vs Ole Miss, vs Missouri