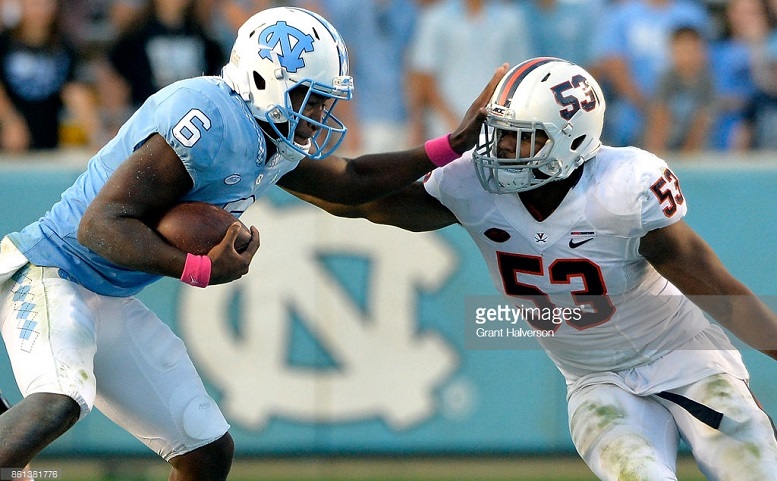 – Lacks elite athleticism to be a true sideline to sideline linebacker
– Stiff body control and change of direction speed
– Cleans up the pile rather than making stops in the backfield
– Often fooled by agile, shiftier ball carriers

Virginia inside linebacker Micah Kiser belongs to a rare group of players. Kiser and former Boston College inside linebacker Luke Kuechly are the only players to lead the ACC in tackles three years in a row. To be mentioned alongside a player with the talent of Kuechly, you must be doing something right. And Kiser is, the inside linebacker is a tackling machine, racking up over 400 tackles during his college career. Though they may not be on par for athleticism, Kiser is exceptionally smart in commanding in the middle of the field, always putting himself in the right position to make a play. While Kiser may not be the fastest or biggest playmaker on the field, he is consistent and that is always a valuable trait.

Athletically, Kiser will never be a sideline to sideline linebacker but with his IQ, he can mask this deficiency. Watch above how quickly Kiser reacts to the end around option and pursues across the field to make the tackle. With help from a few teammates, Kiser is able to wrap up the ball carrier near the sideline.

One of my favorite aspects about Kiser’s game is his ability to explode into the pocket and rush the passer. Here he is demonstrating an almost perfect stunt blitz, falling just milliseconds short of a sack. Kiser demonstrates great downhill burst and power as he pummels the Boise State quarterback. The Pittsburgh Steelers are a team that gets heavily creative with their inside linebacker stunts and Kiser certainly looks like a good fit in that regard. With 19 sacks in his college career, Kiser showed incredible success rushing through the A or B gap and wrecking havoc in the pocket.

Kiser was routinely asked to drop back into coverage for Virginia over the course of his college career and held his own in space. Watch above how Kiser quickly sniffs out the play action and drops back into coverage, and to no surprise he is in perfect position for where the pass is thrown. Once again this is another example of Kiser’s smarts and always being in position to make a play on the ball. Kiser may not be the most fluid or athletic player in coverage but he understands the game well. The Virginia linebacker diagnoses where ball is likely headed like a scientist doing calculations, only these calculations are being processed in a split second.

If there is one area of concern among Kiser’s tape is his tendency to occasionally get lost in the trenches. Due to his lack of aggressiveness, Kiser will not create many jaw dropping plays in the backfield, instead waiting on the play to come to him. This sometimes results in Kiser getting lost in the shuffle or being outmatched by a lineman coming full speed at him. That exact scenario happens on the play above as Kiser is washed upfield by a Miami lineman.

When it comes down to it, Kiser is neither a game changing linebacker nor a dud, his value falls somewhere in the middle. The Virginia linebacker is good enough to find a calling in the NFL and will likely find a home for many years due to his incredible tackling skills.