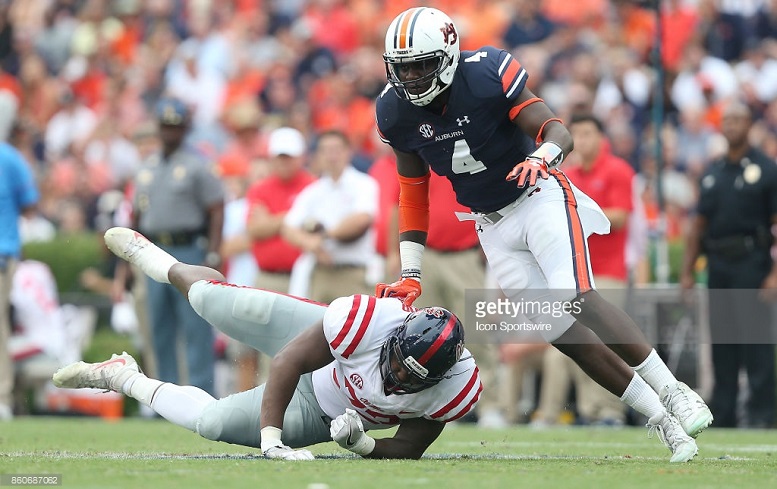 – Active hands thanks to limited martial arts training
– Good get-off, first step
– Some bend
– Displayed rip, dip, cross-chop and bull rush moves
– Possesses some counters
– Disciplined defensively on misdirection plays
– Consistent pressure from both sides of defense
– Played a lot standing up
– Some snaps off the ball in middle of defense
– SEC battle-tested

In the four games that watched of Holland’s he displayed a nice arsenal of pass rush moves. Below is a clip of him using a cross-chop swipe against Alabama tackle Jonah Williams that resulted in him getting around the edge and flushing the quarterback out of the pocket. This, according to him, is his go-to move.

While Holland is not an elite edge bender, he did show bending traits off the edge in the four games of his that I watched. Here is an example of that against Georgia that results in him just missing a sack.

Earlier in that same game against Georgia, Holland shows a nice rip move followed by some bend on his way to registering his lone sack of the game. This was one of his more impressive sacks of his college career.

While Holland does need to improve his run game play and ability to set the edge, he did show some ability to hold his ground on the outside in the four games that I watched of his. Below you can see him set the edge against a Georgia tight end and eventually fight off the block and make a run stop.

Holland showed above-average recognition on misdirection plays in the games that I watched and below are two examples of that.

Holland was a fun player to scout and you’re likely going to start hearing his name more and more once the combine is over as he should test reasonably well, however, not elite, in Indianapolis. Holland is a classic tweener and he played the buck defensive end position at Auburn. That’s the same spot Carl Lawson played while there and the reason why Holland had to bide his time.

For only being a one-year starter, Holland possesses a nice arsenal of pass rush moves and counters. He has very active hands and that will surely impress NFL teams. While he wasn’t asked to drop at Auburn, you can bet NFL teams will put him through those kinds of drills at the combine and it will be interesting to see how fluid he his doing them due to some shown stiffness.

Holland’s lack of length and elite athleticism will likely result in him not being considered a 4-3 defensive end at the NFL and thus teams that run a 3-4 and hybrid fronts should be the ones attracted to him. He’s still a solid day-two prospect, however, in my opinion, and thus likely to hear his name called during the draft in the third or fourth round. I suspect the Steelers will show interest in Holland as he fits what they look for when it comes to mid-round outside linebackers. I can’t wait to see how he performs at the combine. You will get a good sense of what kind of player Holland is in the four videos below and I plan on posting his sack compilation video at a later date.