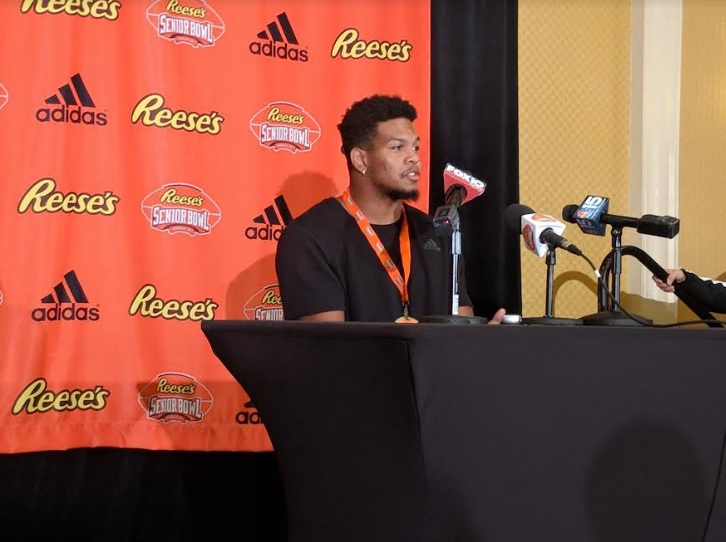 –Quick side to side pursuit in short spaces
–Solid tackler who drives through the ball carrier’s body
–Very athletic-did a scoop and score during the Senior Bowl
–Times jumps to knock down passes against tougher competition
–Hand to hand combat
–Sets and maintains the edge against the run
–Worked mostly out of a 2 point stance, but can put his hand on the ground too

Off the snap, Davenport allows the right tackle to get right into his body. While the defender does not give up any ground, he is unable to disengage from the Baylor lineman’s block. #93 sees the ball carrier and keeps pursuing the play down the field almost holding hands with the right tackle in tow. This play demonstrated his ability to seal the edge, but also show difficulty keeping blockers off his body.

He is lined up in a 2-point stance in the gap between the tight end and the wingback. At the snap, #93 reads the play is heading the other side of the field as the tight end is trying to get to a linebacker on the right while the wingback is cutting off the cornerback to the left. Davenport flattens out and slides down the line of scrimmage. The backer sees a fellow defender wrapping up the ball carrier and helps bring them down for a short gain. I really like how this shows off his lateral quickness and motor to find the pigskin.

At the snap of the ball in a 2-point stance, Davenport gets across the line of scrimmage in a hurry knocking the RT  back on his heels. #93 does not let up and keeps driving his shoulder through the blocker which forces the lineman to the ground. The quarterback feels the pressure and steps up only to get grabbed by a fellow Roadrunner. This allows our defender to smash the signal caller from behind for the sack. This play highlights his single determination to “Hulk Smash” the opposition.

#93 gets a nice jump across the line of scrimmage at the snap of the ball. Davenport dips his shoulder underneath to avoid the tackle’s block and swims away only to get shoved from behind. Despite the push, he levels off his pursuit angle and jumps on the quarterback’s back, folding the signal caller like a beer can. I was quite impressed with his body control and determination to wreak havoc on this play.

The edge rusher got double teamed of the snap of the ball. While knowing that he couldn’t reach the ball in time, Davenport read the QB’s eyes instead going to the back who was out in the flat. #93 disengaged from the linemen and ran down the ball carrier with some help from his Roadrunner teammates. While the defender isn’t great in space, he does flash from time to time like he did here.

The hype surrounding Marcus Davenport was deafening before the Senior Bowl. The former UTSA defender was a bit raw around the edges during those early practices, but rebounded somewhat in the actual bowl game. He is quite raw and needs a lot of refinement. If an NFL team does not select him before the Steelers pick in round one, I very much believe he will be in play. Even if drafted, I would expect Davenport to be more of a situational player year one.