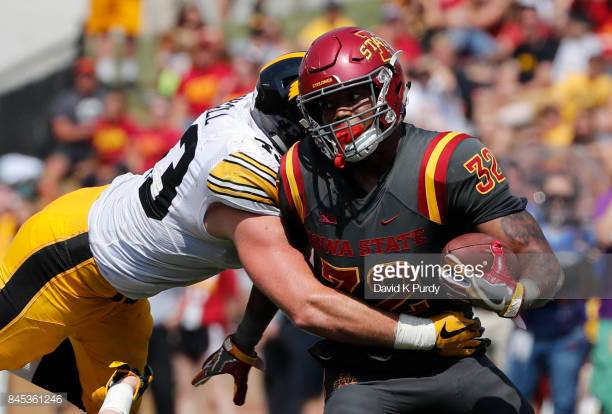 –Good instincts diagnosing what the offense is attempting to do.
–Gets his body flowing quickly to where the pigskin is.
–Strong, wrap up tackler
–Covers best in a zone scheme where he is defending an area and not a man
–Uses a solid base with good balance.
–Disciplined against screens, gets his arms up to knock down pass or wrap up ball carrier before they cross the line of scrimmage.
–Quick burst in short areas with an occasional spin move.

–May be vertically challenged as an NFL inside backer to see over larger blockers.
–Not very fluid changing directions.
–Has issues disengaging from offensive linemen, tries to challenge with balance and power when he should slip the block and find the ball
–More effort based production than athletic ability
–A bit suspect dropping into coverage

On a second and 3 in Iowa territory, at the snap Jewell steps into the zero gap when the center comes out to block his fellow inside backer. He squares up his body while locating Saquon Barkley and then brings his down with a strong wrap up tackle for a 1-yard loss. This play does a nice job demonstrating the backer’s eye for reading blocks and diagnosing what the offense is trying to do on any given play.

The Nittany Lions are in a spread formation on a first and 10. With most college teams this would learn heavily for the offense to attack through the air. #43 mirrors Barkley from the snap of the ball and steps towards the line of scrimmage to prevent a screen. While noticing the Penn State QB has his arm cocked back to throw the pigskin, the Hawkeye backer slips a blocker and times his jump getting his arms up knocking down the pass. This prevented the talented Penn State tight end Mike Gesicki from getting the ball for a first down reception.

On a first and 10, the Iowa defense is showing a 4-3 front with Jewell playing the middle linebacker position against a Badgers strong run formation. At the snap, the Hawkeye defender reads run left and steps into the mass of humanity at line of scrimmage. This over-commitment to a particular hole allows a kneeling Wisconsin lineman to seal #43 off from the play. This missed assignment is one of the reasons why a short run became a 15 yard gain.

The Iowa defense is showing a 4-2 front with #43 playing the strongside inside backer. At the snap, Jewell is not over committing, instead he is reading the run towards an inside gap. The Hawkeye defender uses his quick burst while squaring his shoulders meeting the Huskers runner in the hole for a minimal 2-yard gain with a nice wrap up tackle.

Against a Buckeye spread shotgun formation at the ten yard line, Jewell lines up on the outside shoulder of his DE playing nine tech. The linebacker’s feet appear to be covered with lead (Pb) as he drops back to defend against the pass. The completion was not made, but it had nothing to do with our highlighted defender.

Josey Jewell can be a good inside backer at the next level. He is a strong tackler and a excellent student of the game which helps him diagnosis quickly. My biggest problem with #43 is that he is a complementary backer who needs a more athletic playmaker beside him at the next level to be effective. If Ryan Shazier was fully healthy, Jewell would be an upgrade (in my humble opinion) to Vince Williams. I don’t totally trust the former Hawkeye is pass coverage despite his college production. In the third or fourth round, I am on board with grabbing Jewell as the Steelers second 2018 NFL Draft inside linebacker selection. He will need some time to transition to the speed of the NFL and I would not want him starting his rookie season.