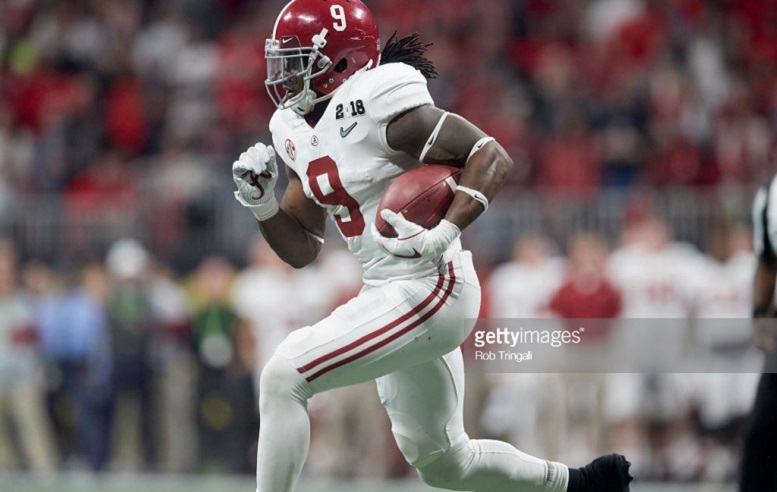 – Great in short yardage situations
– Shows good vision when running outside
– Powerful runner who imposes his will on defenses
– Pushes forward when dropping his shoulder
– Strong stiff arm, variety of power moves to break tackles
– Big body that can handle pass protection duties
– Difficult to wrap up once Scarbrough has full head of steam behind him

– Stiff lateral agility, struggles to change direction smoothly
– Does not always show the best decision making when running inside
– Lack of burst to line of scrimmage
– At 6’2, 235 lbs, Scarbrough is a big target for defenders
– Long injury history throughout college and high school

Alabama running back Bo Scarbrough is one of the biggest enigmas in this year’s draft class. Scarbrough has had such a complex career that he is one of the riskier picks in this year’s running back class. There are many sides to Scarbrough, one filled with injuries, one that shows his offensive MVP of the CFP semifinals and another that shows the disappointment in his final year at Alabama. With a lot of good and bad, Scarbrough presents some upside but also comes with a significant amount of baggage.

At 6’2, 235 lbs, Scarbrough is big, physical back who is a wrecking ball when he gets some steam behind him. Watch above how Scarbrough breaks five tackles and shows incredible determination to get into the end zone. When Scarbrough drops his shoulder, he is almost impossible to bring down alone. There is perhaps no other running back in this year’s class who can match Scarbrough’s size and strength. His big frame and strength power him through many arm tackle attempts, making him one of college football’s most lethal short yardage backs, a role he could fill at the next level as well.

Defenders who assumed they could launch themselves or take weak arm tackle attempts at Scarbrough learned quickly to not do it again as the Alabama back constantly just shrugged them off. Trying to tackle Scarbrough in the open field alone is like trying to take on a car going full speed. The most you can do is try to hold off Scarbrough until reinforcements arrive.

Another noticeable pattern that comes through on Scarbrough’s film is his vision in running outside. Just like the first two handoffs, Scarbrough surprisingly shows good ability and feel for outside handoffs and following his lead blocker. Whether it’s a straight power blocking scheme like the two previous handoffs or outside zone (play above), Scarbrough shows an ability to diagnose and turn up field on outside handoffs. From there the Alabama running back lets his physical tools take care of the rest. 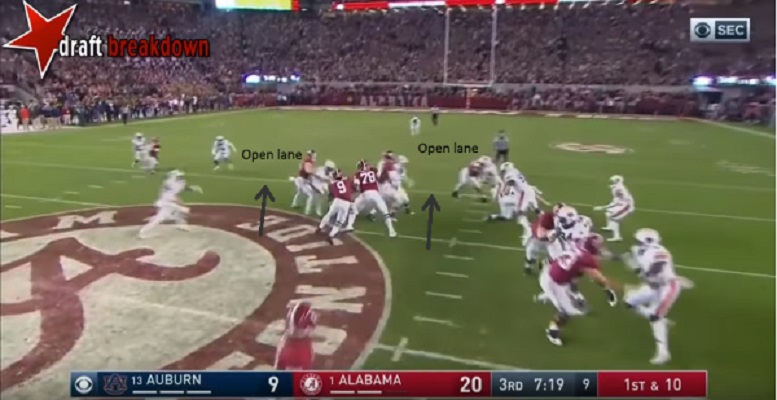 Where Scarbrough does tend to struggle from time to time is his vision and lane selection on handoffs up the middle. The running back will often try to squeeze into holes way too small for a running back his size while ignoring better options. That is exactly what happens above as Scarbrough plunges for a miniscule lane while ignoring two very open lanes to his left and right. The blocker to Scarbrough’s left has outside leverage as well, making Scarbrough’s decision to run inside even more head scratching.

Scarbrough has many physical traits that make him a tough downhill runner but also has many limited athletic abilities that will lower his ceiling at the next level. While Scarbrough has been compared to former Alabama back Derrick Henry, he fails to carry the same athleticism that Henry possesses. Scarbrough is very stiff when changing direction and runs very upright. As seen above, instead of one fluid motion, it takes many moving parts for Scarbrough to laterally change direction.

The final red flag against Scarbrough is his durability and medical history. This is a running back who at the age of 21 has had two ACL injuries (one in 2015 and one in high school), a broken leg (2017) and a broken ankle (high school). Among with these injuries, Scarbrough has never produced like expected. This last season, Scarbrough finished third on the team in rushing yards, third in rushing attempts and his 4.8 yards per carry were the fewest of any Alabama player (min 20 carries).

Scarbrough has never failed to bring hype and optimism to his potential but perhaps he is better suited for a rotational role at the next level. The team that selects Scarbrough can temper expectations and use the running back in relief or short yardage situations, playing to the running back’s strengths.