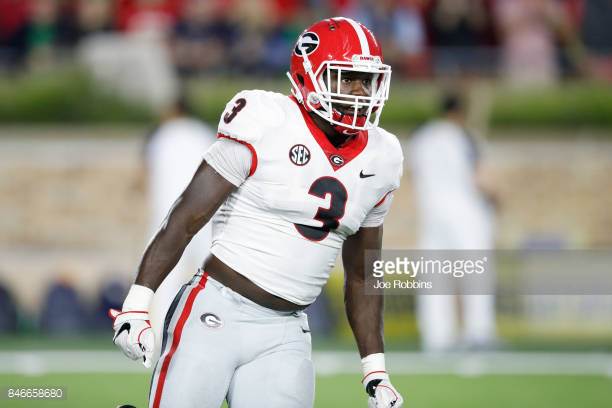 -Very fluid and lite on his feet
-Finds football consistently and rarely gets fooled by play fakes
-Explosive lower half that allows him to click and close quickly with force and speed
-Consistent, productive blitzer
-Comfortable dropping into coverage, whether in zone or man
-Understands drop depth and has speed to pick up crossing routes and carry them across the field
-Rangy, sideline-to-sideline linebacker with impressive athleticism
-Very aware of surroundings and what offenses are trying to do

-Tends to slide off of tackles at times due to technique and positioning
-Can be overpowered when he lets OL reach him at second level
-Lacks hand usage against blockers, leading to him being engulfed by lengthy linemen
-Slightly undersized for position, in terms of height
-Doesn’t always take most efficient routes to the ball
-Can get caught up in traffic and get washed out of plays

-Former high school wide receiver that was a top-30 recruit as a linebacker
-Led Bulldogs with 137 tackles, 6.5 sacks, 14.0 tackles for loss and 18 QB pressures in 2017.
-Named one of four permanent team captains for Georgia
-Named 2017 Defensive MVP for Bulldogs
-2017 Butkus Award winner as the nation’s top linebacker
-Defensive MVP of the Rose Bowl with 11 tackles, including half a QB sack and highlighted by several key third-down stops
-2017 First-Team All-American by six total organizations

Coming into the 2017 season, Georgia junior linebacker Roquan Smith was the linebacker to watch for the 2018 NFL Draft. Capping off a stellar junior season with a monster game in the College Football Playoff final against Alabama, Smith didn’t disappoint wire to wire, finishing with 137 tackles, 6.5 sacks and 14.0 tackles for loss for the Bulldogs.

As athletic as they come at the position, Smith is head-and-shoulders above the rest of the linebackers in this class. A former wide receiver in high school, Smith maintained that speed and athleticism despite bulking up for his staring role at linebacker for the Bulldogs.

Although slightly undersized for the position, Smith is a rare talent. He can come downhill with speed and force against the run, often sticking his face into the fire with reckless abandon to make stops against the run. He’ll flow sideline-to-sideline with ease, running down backs out the backfield to shut down potential plays, and he even has the speed and athleticism to match up with backs and tight ends in man coverage, allowing his defensive unit to provide help to No. 1 receivers elsewhere.

A good throw from Mayfield likely burns Roquan here, but look at the way he’s able to change directions so quickly to be able to run with Rodney Anderson here. Freakish linebacker. pic.twitter.com/jaAG9fMrPX

While a better throw here from Baker Mayfield in the CFP semifinal likely burns Smith on the wheel route to Rodney Anderson, I’m mesmerized by the way Smith is able to race out towards the flat to match up with Anderson, but then simply flip his hips and run in his hip pocket down the right sideline without even breaking stride.

It’s rare to see a linebacker do that type of stuff. There are maybe three guys in the NFL that can do that right now. Add Roquan to that list.

When not running with running backs and tight ends in coverage, Smith is busy running them down sideline to sideline for tackles.

Roquan’s range here is absurd. Never bites on the fake jump pass and basically beats Kerryon Johnson to the edge, cutting him off. Flying. pic.twitter.com/JUvmxj7VXd

Against Auburn in the SEC championship game, Smith doesn’t bite on the fake jump-pass from Kerryon Johnson and simply beats him to the boundary, forcing him to stop and try to cut back. That plays right into Smith’s hands as he has backup from Lorenzo Carter for the stop in the backfield.

Smith did a similar thing against Oklahoma in the semifinal, helping to string out a run to the right, but this time Smith made the stop.

This is my favorite play by Roquan in the CFP semifinal. He was rather quiet in the first half, but this play helped jump-start him for second half. Flows to the sideline and packs a punch at the end. pic.twitter.com/0Qy2I7QlPw

Even when he’s off-balance here at the end of the play, Smith is so strong and explosive in his tackles that he stops the OU ball carrier dead in his tracks for a huge stop late in the first half.

Aside from his range and ability to cover, I am really intrigued by Smith’s awareness and ability to know what’s going to happen before the play starts. That has a lot to do with film study.

Roquan knows where this play is going immediately. Beats the blocker to the hole to make the stop on the back at the LOS. He comes downhill in a hurry. pic.twitter.com/3etPsEOUnD

As soon as the ball his snapped here against Mississippi State, Smith is already flowing to his right to fly downhill into the hole for the stop. Not many linebackers have his click and close ability, and when you add in his explosive first step and knack for reacting quicker to the play than others, that can lead to a high number of tackles.

Where Smith needs to improve at the next level is in his ability to get off blocks in the second level once offensive linemen reach him. When length linemen get their hands on him, it can be game over at times, but he did flash the ability to use his quick start-stop athleticism to slip around blockers.

Really like the way Roquan is able to avoid blocks and not take himself out of the play. pic.twitter.com/XelWwVDU26

Look at the way Smith not only slips around the block from the Sooners’ linemen, but also stays in the play, leading to a tackle. Oftentimes, when linebackers do this in the middle of the field, they tend to take themselves out of the play. Not Roquan. He gets around the block so quickly, he’s able to stay in the play.

Overall, I believe that Roquan Smith should be a top 10 pick in this draft, and easily the No. 1 linebacker off the board. In today’s game, he’s everything you want in a linebacker, whether that’s a 3-4 ILB or a 4-3 LB at the MIKE, WILL or SAM.

This guy can help change a defense’s outlook for the next 10+ years.