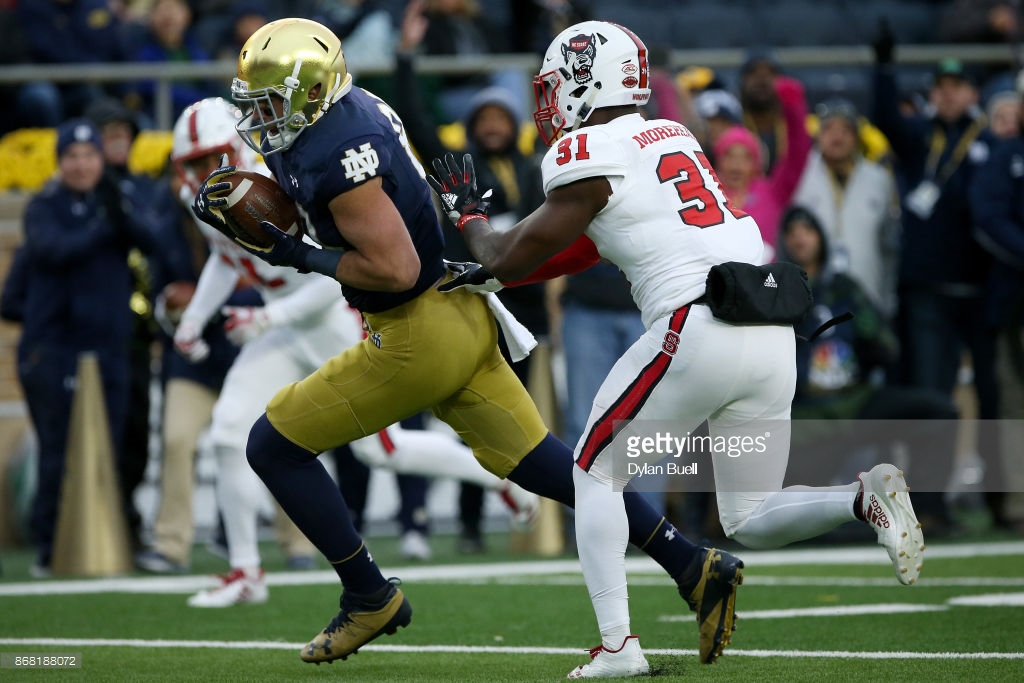 – Classic, old-school in-line blocker who does it very well
– NFL frame and used like a pro-style tight end in college
– Strong upper body who holds the POA and at his best when he’s able to keep his lower half moving, good base and grip strength
– Able to block in space in the run game
– Rare experience in pass protection and does well
– Spent most of his time in a three-point stance, unusual for college
– Physical demeanor and approach to the game
– Strong hands and can make difficult catches in traffic, willing and able to take a hit going over the middle and underrated – and underutilized – receiver
– Surprising burst out of his stance, doesn’t need to build-up speed

– Struggles to get separation as a route runner, scheme needs to open him up
– Not a dynamic player, average athlete and will test as such (or below)
– Tendency to fall off blocks when his lower half stops moving
– Ran a limited route tree in school and not involved in the passing game
– Bull rush and long arm moves will give him problems in pass protection
– Limited upside because of average athleticism, niche player who won’t fit demands of every scheme, especially as a starter
– Lacking idea length for his size (31 7/8 inches)

Not every team is going to want a Durham Smythe. But Pittsburgh? He’s everything they could’ve dreamed of. Sure, they flirted with Ladarius Green and added Vance McDonald, who certainly added a new element to the Steelers’ offense last year. But McDonald was a strong blocker and in a way, that got back to the roots of the position in Pittsburgh. They have a unique checklist for tight ends, staying old-school in an era where the position has evolved more than maybe any other.

Strong blockers. Playing with your hand in the dirt. Work in pass protection. Tough, physical, doing the dirty work. And Smythe hits all those boxes. Probably more than any other tight end in this draft. As the numbers show, he sure didn’t earn his keep by catching the ball. It was everything else. The dirty, grunt work that makes the Steelers proud. Let’s take a look at some clips.

Here he is lined up next to the left tackle in this two tight end set. Combo block where he helps wash the 3 tech down and then climbs to the second level to square up and run out Roquan Smith, one of the top prospects in this year’s draft. Mobility, leverage, strength, finish, this play shows it all.

He was asked to take on plenty of responsibility as a blocker at Notre Dame. Here in 2016,he’s down blocking on the three tech. And doing a pretty good job. You’re not going to see many – or really any – other starting tight ends in college do this stuff at all, much less on a regular basis like Smythe does.

Left side of the screen, blocking #95.

Though he was hardly ever targeted as a receiver, he made plays there too. Showed it at the Senior Bowl too in an atmosphere where they fed him the ball. Fearless over the middle and makes tough grabs in traffic. Great diving catch in front of two defenders vs Michigan State last season.

And then one more as a blocker. Leading out in space, taking on the OLB (#48) and burying him into the ground.

Not a lot of flaws in his game. You’ll see him at the Combine and he’s an average to below average athlete overall, though I like his burst off the ball as a route runner. Doesn’t stand up, gets to his top speed quickly. But he’s not a dynamic player. Think of his athleticism on par with Jesse James.

But he does everything else so well. The toughness, the ability and experience to block, and his willingness to make difficult catches in traffic. Envision him as a strong third and down and red zone threat.

Pittsburgh is unlikely to take them because I bet they keep McDonald and if they add a TE, it won’t be until late to throw some competition Xavier Grimble’s way. But man, Smythe fits so well for this team and if they select him, I’m not going to get mad. He aligns with their ideals to a “T.”