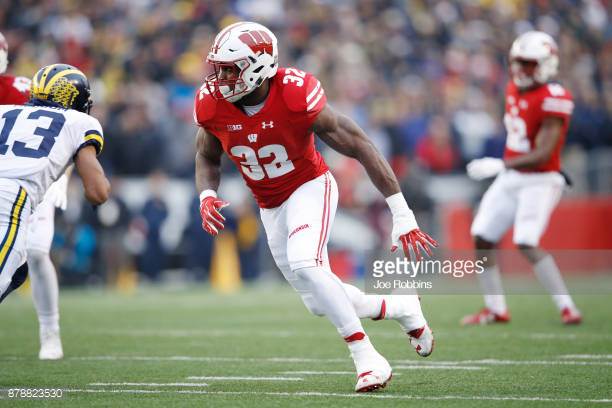 – Experience at inside and outside linebacker
– High motor player who never gives up on a play
– Powerful inside pass rush moves
– Shows ability to set the edge and stay disciplined to his gap
– Athletic, great speed/burst off the edge
– Raw dip, bend off the edge, works well with his speed
– Frequently asked to drop in coverage, shows good depth and reaction when in zone coverage

– Lacks elite instincts
– Often fooled on option handoffs
– Can be washed out of the play on stretch runs
– Has to get better defending the run between the tackles
– Still very raw, 2017 was Jacobs’ first full time shot at OLB
– Lacks consistency

Jacobs recorded just 3.5 sacks last season but these numbers do not tell the whole story. It is not possible for the numbers to pick up on Jacobs’ ceiling and raw ability that he demonstrated in his first full season at outside linebacker. Jacobs is quick off the snap, blending his speed nicely with a dip move to beat the opposition. On the play above, the Wisconsin linebacker is simply too explosive for the Miami right tackle and times his dip perfectly. This play will not show up on any stat sheet but perfectly demonstrates the raw pass rush ability that Jacobs brings with him.

While majority of college pass rushers often have one pass rush move that they use to exhaustion, Jacobs shows potential for a second move in his arsenal – a strong bull rush. While certainly not a polished move, watch the raw strength and power Jacobs flashes as he drives the Florida Atlantic right tackle backwards into the pocket, again just falling milliseconds short of a sack. Another play that will fail to show up on any box score, but a play that checkmarks another box for Jacobs.

Jacobs has the tools, size and raw athleticism to develop into a quality outside linebacker at the next level, he will just need the right environment and coaches to put together the final pieces on his pass rush potential. He has also flashed a spin move at times along with his dip and bull rush but will need some work on finishing and putting his sequence together in one fluid motion. The blocks to build Jacobs are present, it will just be putting those blocks together to create the final product.

When it comes to defending the run, Jacobs shows an understanding of setting the edge and holding his own at the point of attack. Watch above how Jacobs attacks the Miami tight end, keeping his eyes on the ball carrier before shedding the block and making the tackle. Jacobs shows flashes of setting the edge and gap discipline but if there is one area he can improve, it is between the tackles on inside handoffs. Jacobs is still prone to getting lost in traffic but with more repeated reps and experience, perhaps improvement is possible.

Here is where Jacobs’ prior experience at inside linebacker comes in handy and will only help him as an outside linebacking prospect. Jacobs shows great ability to drop into coverage and be a force in pass defense. Watch above how Jacobs drops back into the middle of the field, reads the quarterback’s eyes and is easily able to disrupt a slant pattern. Keep in mind how often Pittsburgh Steelers defensive coordinator Keith Butler asked his outside linebackers to drop into coverage this season – this alone makes Jacobs an intriguing project for the Steelers. While Jacobs may need more polish as a pass rusher, the team that selects him is getting a ready linebacker when it comes to dropping in coverage.

Jacobs checkmarks all the requirements for athleticism and physical tools, though his inexperience still rears its ugly head when it comes to diagnosing and reading a play. Jacobs is late and fooled on option handoffs and shows a slight delay in run defense. While this could all be the result of inexperience at the position, it is an aspect of Jacobs’ game to keep an eye on.

Considering his raw talent and inexperience, Jacobs certainly does a lot more positive than negative on the field. His speed, dip, strength and ability to drop in coverage will make Jacobs a favorable project for many teams at this year’s upcoming draft. Knowing the Steelers need for outside linebackers and their infatuation for dropping their outside linebackers in coverage, Jacobs certainly makes sense for the team. While still nowhere near the class of former Wisconsin team mate T.J. Watt when he declared for the NFL, Jacobs has a high ceiling due to his raw ability.

Games Watched: vs Maryland, vs Miami, vs Florida Atlantic