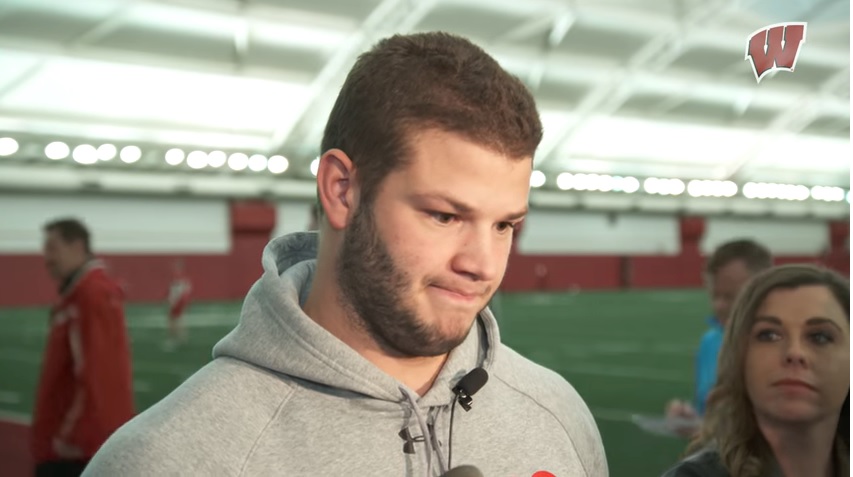 –Huge injury history: torn pectoral in October 2016 and suffered a torn right ACL during 2017 preseason camp
–Inexperienced with 11 starts in 25 games
–Long layoff from playing football, will he show the same athletic gifts almost 2 years away from football?
–Has a tendency to leave his feet necessarily
–Can run high when chasing play across field which makes him easier to block

–2016 Butkus Award semi-finalist and All-Big Ten honorable mention
–Career statistics: 121 tackles (78 solo) with 15 of them for a loss, 6.5 sacks, 6 passes defended, and 2 forced fumbles.
–Sacked the quarterback 3 consecutive times in a row during the 2015 Holiday Bowl
–2 time high school football captain
–Both parents were college athletes with his father playing in the CFL.
–High character as he volunteered with Amnesty International and Ronald McDonald House, also served food at a local homeless shelter along with being a camp counselor.

Lined up at the left linebacker spot against a strong run formation, Cichy reads the triangle (two guards and fullback) and flows quickly towards the ball carrier. He dips around the full back and helps wrap up the ball carrier. This play shows off his identification skills and ability to avoid contact while getting to the pigskin.

At the snap of the ball on a second and 10, #48 takes a short step back and waits while reading the quarterback’s eyes. Once Cichy notices the back running towards his area, the backer dives at the ball carrier’s feet bringing him down with a nice open field tackle. This demonstrates how the former Badger reads the signal caller and can drop back, even slightly, in pass coverage.

Initially lined up on the strong side, the backer creeps up inches from the line of scrimmage. At the snap, he slips through the left guard’s grasp and gets his arms up which causes the Michigan QB to alter his throwing path. This allows a badger teammate to knock the ball up and prevent a unmolested pass. I like the way this shows #48’s ability to rush the passer from the inside and wreck havoc.

Playing the strong side inside backer on a 3-4 overhang, #48 gets a little nosey at the snap by flowing to the middle of the field at the snap. Cichy sees the quick throw along with the blockers setting up in the flats. The backer wades his way through the mass of humanity while quickly closing on the receiver for a 2-yard gain. He almost strips the pigskin out of Darboh’s arms as he is bringing the WR down.

On a second and six play, the Badger defender reads the guard pulling to the right at the snap. #48 flows quickly trying to anticipate the runner’s path, but gets caught up in the trash despite fully extending his arms against a lineman. Thrusting his arms out is not enough, the backer needs to do a better job shedding.

I like this high effort defender in the later rounds. Cichy hasn’t played meaningful football since October 2016, so he has a lot to prove during the NFL Combine and scheduled team workouts. If he is fully recovered from both a pec tear and the ACL injury, I like the Steelers to invest in him sometime on Day Three as a second possible inside linebacker. Year one would be spent learning the system and getting ready for perhaps a starting role in the 2019 season.