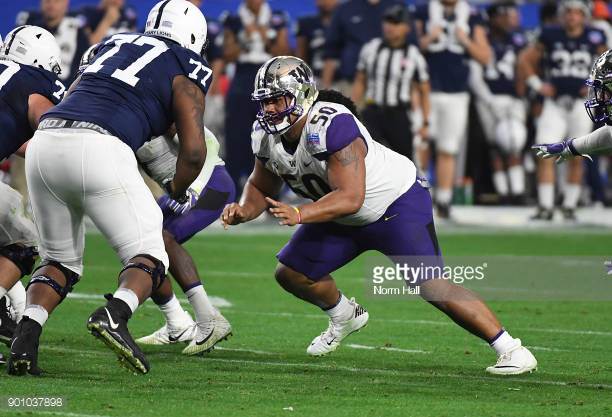 –Despite being a junior, Vea is already 23 years old
–Tends to overextend and lose balance
–Can get to high out of stance which causes him to lose power advantage
–Has some issues combating double teams
–Impatient using technique, if not immediately successful will go back to power
–Needs to improve pass defense and develop other move than bull-rush
–Motor runs hot and cold

Out of a 4 point stance, Vea lines up on the outside shoulder of the center. He shoots across the line of scrimmage at the snap, stays low while getting into the pads of the center. #50 keeps dragging the offensive lineman back and takes a one-handed swipe at the quarterback. That was enough to break down the pocket, allowing a fellow Huskie to bring down the signal caller. This play shows the power of the defender when he stays square and low.

Lined up on the outside shoulder of the right guard, #50 comes up too high out of his stance at the snap of the pigskin, straight into a double team. Vea swats the right guard away and leaves his feet diving for the fleet-footed Penn State quarterback. The defender whiffs, but rolls through to watch his teammate bring the ball carrier down. The former Huskie is very athletic, but the only reason he got away from the double team is that the o-linemen mistakenly thought the runner was already past them. #50 got way too high out of his stance at the jump and looked like he was dancing with the guard and tackle.

Heads up across from the right guard, the defender screams through the line of scrimmage too  high and gets too much penetration. Vea is easily taken out of the play by the center, but his disruption breaks the levy for the rest of Rutgers o-line which allows the runner to get swallowed up. Even when not making the smart play, #50 still creates blocking problems.

Vea lines up almost helmet to helmet on the center. He comes across a little high off the snap, but uses his upper body to stonewall the center’s efforts. #50 sees Bryce Love running path and throws the blocker away while muckling onto the runner, bringing him to the ground with some of his Huskie friends. When the defender can overpower and find the ball, he is difficult to stop.

Vita Vea is a great physical prospect that needs more development. He mostly likely be long gone when the Steelers pick in the first round. While I believe he could grow into a good nose guard, the former Huskie might make a better 3-tech in a 4-3 scheme. The Haloti Ngata comparisons have some merit.