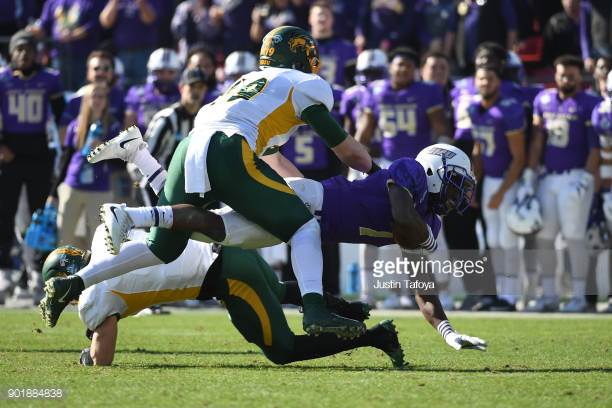 – Has special teams experience, can contribute in many ways
– Smart, field general, diagnoses plays quickly without over pursuing
– Comfortable dropping in zone
– Playmaker in coverage, seven career interceptions
– Closes in quick on the ball carrier
– Instinctive, always around the ball near the line of scrimmage

– Has an injury history, shoulder issues in 2016 and knee injury in 2017
– Lacks strength to finish tackles on ball carriers on the move, whiffs with arm tackles
– Needs to wrap up more consistently
– Not overly athletic, gets beaten laterally by elusive players
– Lacks speed

North Dakota State inside linebacker Nick DeLuca is one of the most promising prospects to come out of the FCS this year. At 6’3 and 245 pounds, DeLuca sure has the size to be a presence over the middle. Though DeLuca is not just confined to the middle of the field as the linebacker is constantly in position to make plays from sideline to sideline.

DeLuca is just so quick at diagnosing and attacking a play. The middle linebacker’s instincts are top notch as he is rarely fooled and always around the ball. Watch above how DeLuca (left ILB) watches the screen develop and then comes charging in like he was shot out of a cannon to make the tackle. DeLuca storms right by his blocker and delivers an explosive hit on third down.

If the play occurs near the line of scrimmage, you can bet that DeLuca is going be involved in some way, shape or form. Watch above how he sniffs out the run and wait for the perfect opportunity to come crashing down to make a play. Once again, he is not the most athletically gifted player so his instincts and ability to diagnose are key features of his game. DeLuca is as instinctive as they come as time and time again on tape, the middle linebacker has shown excellent ability to diagnose and put himself in a winning position to make a tackle.

With seven interceptions over his college career, DeLuca is a playmaker, there is no way of spinning it otherwise. The linebacker shows a great feel for dropping into coverage, understanding his depth and reading the quarterback’s eyes in order to jump a route. That is exactly what he does above, as he sits in his zone and slowly creeps to his right as he watches the quarterback lock in on a target. DeLuca’s instincts in coverage will be his most transferable asset to the next level as the linebacker shows ability beyond his years.

DeLuca feels almost like a character written for TV or literature as he has one fatal character flaw that he cannot escape – his inability to finish his tackles. DeLuca leaves a lot of tackles on the field as the linebacker struggles to bring down ball carriers in space perhaps due to a lack of play strength and athleticism. He’s the second defensive player to attempt a tackle above but he lets the ball carrier slip right through his grasp. This is a constant in DeLuca’s film as he is just not strong enough to bring ball carriers down.

This above play runs perfect until the last second or so. DeLuca reads the run and run direction almost before the hand off is complete, reaching the hole before the San Diego running back does. Unfortunately, there is just one huge problem. DeLuca misses the tackle and his perfect diagnosis is erased from this play’s history. If you were asked to describe him in one play, this would be the one to choose. Excellent instincts to put himself in a position to make a big play but an inconsistency at finishing. DeLuca will definitely have to work on wrapping up should he want to succeed at the next level.

The injury history should also be taken into consideration as the linebacker missed time last season with a knee injury and also had a shoulder injury that shelved majority of his 2015 season.

DeLuca is a small school prospect who passes the eye test for being instinctive and excellent in coverage, where he falls short is his consistency in finishing. He’ll have to improve his ability to wrap up should he hope to find a place at the next level. Though the linebacker does have extensive history and success playing special teams, which should help his chances at being on an NFL roster this year.